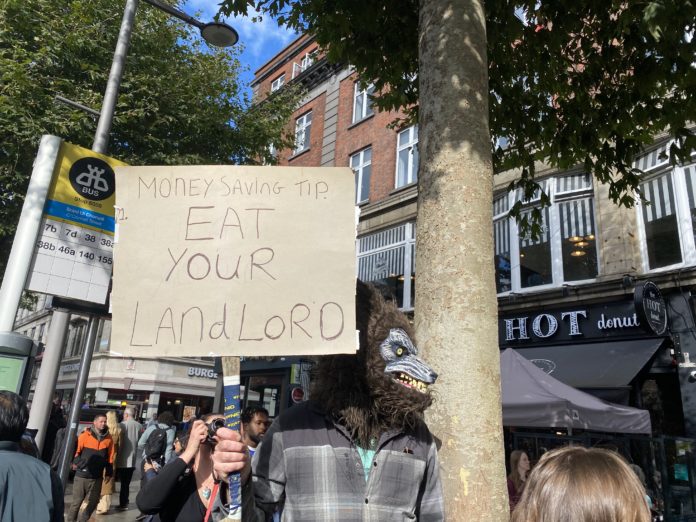 On Tuesday, the Government was all in a flurry as it announced Budget 2023, including apparently unprecedented levels of funding for housing.

The next day, the Business Post reported that the plan to completely phase out leasing homes as “social housing” is still under review. On Thursday the story became public that a Maynooth student had been told by her landlord that half her bed was going to be rented out for €25 a night to a stranger. And on Friday the Department of Housing announced that there are now 10,805 people relying on emergency accommodation, including 3,000 children.

In a week where the need for radical change was apparent, the Government went instead for more of the same.

First up on Tuesday was Minister for Finance Paschal Donohoe. Many on the left have been calling for a vacant tax for years, but satisfaction at the announcement soured only a few hours later as the details of the proposed vacant tax became known. The tax will be self-assessed, have a large number of exemptions, will not apply to derelict properties, and will be set at a rate of three times the Local Property Tax. Jude Sherry’s Twitter thread has been shared widely: approximately 4,000 vacant homes may be taxed, which is significantly below the 166,000 identified in Census 2022 or even the 57,000 that Revenue counted last year, and those that are taxed will pay 0.3% of the property’s value. In France it’s 12.5% in the first year, rising to 25% in the second year. In Saturday’s Irish Examiner Jude Sherry and Dr Frank O’Connor ask is the new vacant homes tax designed to fail?

Then Donohoe went on to say that the Help-to-Buy scheme will continue until the end of 2024, though it will be kept under review. He’s keeping the scheme going despite publishing a report on Budget day which says that the “scheme promotes demand for new housing in a market where the problems that exist are unequivocally supply constraints.” The report also claims that the scheme is poorly targeted with respect to income, location, house prices, and other socioeconomic factors, with relief provided “in general to people in the higher earning percentiles of the population”. Last year, the ESRI told the Oireachtas housing committee that the scheme was “very likely” to lead to higher house prices.

Donohoe also announced a €500 per annum new rent tax credit. Lorcan Sirr has pointed out in the Daily Mail that as the average rent for a new tenancy is €1,500 per month, the credit will amount to “just one-third, or less in Dublin, of one month’s rent across the country for a single tenant.” The Tánaiste made a weak defence of the scheme when confronted with Ireland AM presenters suggesting that a “rent freeze would make more sense. It would help more people over a longer term.”

Marie O’Reilly, policy officer at the housing charity Threshold, has said: “the rental sector in Ireland is a gateway into homelessness… The Government’s lack of action to help tenants will clearly result in a requirement for more radical measures to be put in place.” Rose McGowan, SVP National President, said that “our experience shows that one of the biggest drivers of poverty among families today is housing costs. Parents want and need a place to call home, which is affordable and secure so that they can create a stable routine and environment for their children. Ensuring people can meet their housing costs and stay in their homes in the first place is one of the most important things the Government can do to prevent the trauma of homelessness. The new rent relief for tenants is welcome but unfortunately it will not go far enough as the Budget is weak on prevent and tenancy sustainment measures.”

While admitting that the Budget’s one-off measures will insulate most households from rising prices this winter, the ESRI warned that many lower-income households will experience “real terms cuts in living standards in the latter half of 2023”. They also highlighted that given the demand for housing and long-standing supply constraints, using the new levy to part fund the (Mica) Defective Concrete Blocks Redress Scheme means “the burden of this new levy is likely to fall on the residents of newly built homes rather than on industry.”

After Donohoe, the Minister for Public Expenditure Michael McGrath got his turn. However, it was mostly a repeat of previous announcements made as part of Housing for All and the National Development Plan. According to the Expenditure Report, the Department of Housing has €4 billion for housing next year, of which €2.6 billion is capital (including €240m they didn’t spend this year) and €1.4 billion current. Apparently, €1.7 billion will be allocated in capital funding next year to deliver 9,100 new build social homes. The Expenditure Report says this marks an additional €27 million for social housing delivery for local authorities and Approved Housing Bodies and €41 million for cost rental and affordable purchase, while the Social Housing Current Expenditure Programme gets an additional €98 million for long-term leases.

In response, Social Justice Ireland says that increasing capital allocations from €2.56 billion to €2.6 billion will be insufficient to meet existing targets, never mind that the real need is 14,000 new social homes per annum rather than 9,000 to account for those on the social housing waiting list and those in HAP and RAS tenancies.

Over on the Reboot Republic podcast, the discussion (48:25 onwards) looked at what was missing from the Budget, including a ban on evictions and the problems inherent in treating housing as a commodity. When the Department of Housing released the monthly homelessness numbers of Friday, Pat Dennigan, chief executive of Focus Ireland, said that it is “unforgiveable” that there were no measures in the Budget to prevent people falling into homelessness.

We’ll leave the last word to him:

“As the numbers keep going up, there is a risk that Government comes to treat homelessness as inevitable, but it is the result of bad political choices and can be solved by the right policies.”