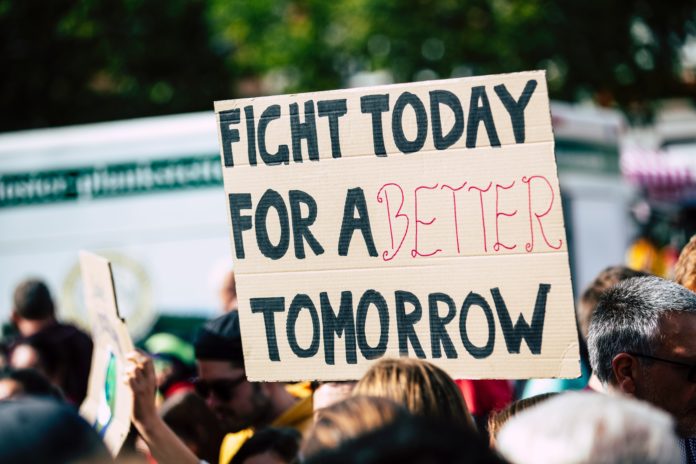 Earth Day has become, over time, as Greta Thunberg has described, “an opportunity for people in power to post their “love” for the planet, while at the same time destroying it at maximum speed”. Originally a protest movement funded by trade unions with the aim of regulating corporations following the massive Santa Barbara oil spill of January, 1969; the messaging of Earth Day quickly segued into one of individual responsibility. This, of course, was no accident, but a toxic narrative that deflects climate action away from those directly responsible.

In the very week the IPCC report on mitigation for the climate crisis warned of the inadequacy of incrementalist consumer-oriented climate measures, the Minister for Climate Change Eamon Ryan TD was out causing his own climate chaos. The “man born with a silver foot in his mouth” informed the population of the need to have shorter showers and colder houses in the name of climate action.

While such messages are generally dismissed as bumbling or incompetent, these narratives have a more insidious and dangerous purpose.Originally crafted by the fossil fuel industry, notions like individual “carbon footprints” or “net-zero” are the soft-sell predecessors of the downward-kicking climate actions imposed by Green Party ministers in the name of a “just transition”. This tactic of individualising a systemic problem precludes any actual climate action and is so powerful that the same minister blaming climate crisis on individual people may also issue gold mining licences in ecologically sensitive areas in Leitrim, for example, without so much as a squeak of opposition from his own party. Thus, even self proclaimed “environmentalists” place themselves on the side of capital over people and environment.

The latest IPCC report is not science proving that capitalism is incapable of transitioning our societies and economies to zero-carbon, it is, instead, a report produced by scientists whose methodological assumptions take the prevailing political economy as given. These scientists are now saying, in no uncertain terms, that these framework conditions need to change if we are to avert planetary disaster.

The practice, therefore, of asking workers and carers, who are already relatively efficient consumers of carbon, to individually change their behaviours goes completely against the message of this report.

Far from “following the science”, the Green Party is ignoring it. It is already relatively clear that the members of various environmental groups repeating this narrative are fast losing popular support for proponents of climate action. In so doing they are actively engaging in unscientific climate denial and are directly doing the work of the fossil fuel industry.

Capitalist economies are unable to manage pandemics, solve poverty and inequality and climate science is arriving at a logical conclusion that they are also incapable of managing the climate crisis. This report is challenging us all to consider the framework conditions that we are operating in with a critical eye. The inconvenient truth for climate activists in Ireland is that cheerleading punitive half-measures which actively preclude climate action are, at best, greenwashing and at worst, salaried propaganda for climate denialism.

The IPCC says that gradualist policy approaches are inadequate, that carbon capture technology is a fantasy. In short, climate scientists are saying to us, in the strongest language they can, that this is a political problem. A massive social, economic and spatial reordering is required. This means radical political intervention which our government is not only failing to provide, but is actively moving in the opposite direction to. The list of examples grows weekly, from inefficient data centres bringing a privatised energy system to breaking point to a paltry climate bill that is as ineffective as it is unenforceable. In many other instances, it is climate inaction which produces ecological damage.

The logic of this IPCC report suggests that a transition to a post-carbon world would be readily achievable but for our economic system. It is because of this system’s siloing of finance capital, its coercive laws of competition which ensure continual production of private bads rather than public goods, and its inability to take two-thirds of the global population out of poverty that makes climate action such heavy lifting. That economic system is reflected in Ireland’s political system and the same logic applies.

If the present political paradigm is not able to leverage the capital and political will required for this transition, then what is to be done? Let us look appraisingly at the current position of our political system. We have Green Party Ministers holding the IPCC report aloft for photos outside government buildings saying “everything must change”, and then going back inside to defend the charade of pointless and painful climate measures passed down to those who can least afford them. If the IPCC report says we need an altered global economic framework to succeed in averting climate disaster, then it follows that the political systems underpinning this need to change too. The state needs to be in a position to access the capital needed for the social purpose of mitigating the climate emergency, and to make finance and industry functions of this rather than external profit-seeking stakeholders. Instead of being subjectified through the eco-austerity of the Green Party and their supporters, people need a state that provides the basic securities that the climate emergency and cost of living crisis threaten. Whoever replaces this government needs to make sure it is the last of what we might look back upon as “the neoliberal period”, and that is only possible through developing an eco-socialist programme of political change right now.

We, all of us who are being told by our betters to choose between heating and eating, need to start talking about stopping climate crisis ourselves. This can only be done through reordering society to put workers and carers at the helm. What this crisis demands is revolution, a process whereby a ruling class that we have now, which can’t or won’t act on this, is replaced by a working class that is able to act in the social interest.

Cllr Lorna Bogue is leader of An Rabharta Glas – Green Left and a councillor with Cork City Council. She holds an Msc in Economic Analysis from the Jim Kemmy Business School.