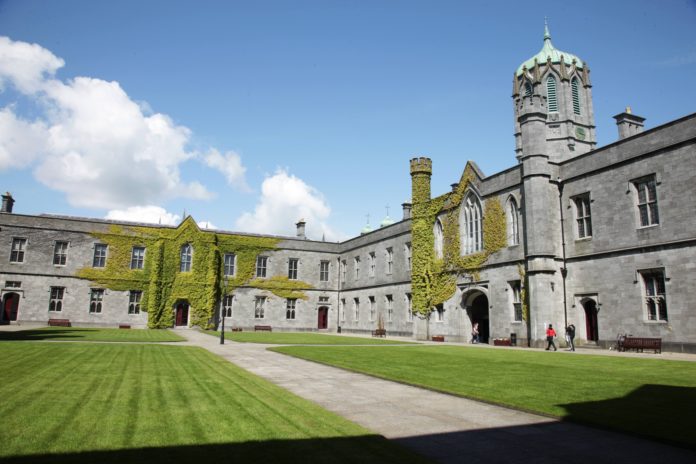 Strikes are “unpredictable before the event and only partially explicable afterwards”; this is certainly true of the strike in 1977 by the administrative/secretarial staff at University College Galway (UCG).  At that time, a strike for union recognition in the public sector would have been rare enough, a strike by young female clerical workers was rarer still. In this case, the unions of all other (male-dominated) grades had been recognised.  UCG, however, refused to recognise the union chosen by the mostly female clerical staff.  Was this a question of straight forward misogyny or was something else afoot?

These administrative grades had tried to have their issues addressed via a staff association, but as is usual in such cases, this staff association had no power and was unable to force a reluctant management to agree to any improvements.  A decision to join a union taken at the staff association’s 1976 AGM was no surprise.  What may have caused surprise, if not consternation, however, was the choice of union.  Could this have inflamed management hostility further and/or contributed to a perceived lack of support from other grades?

Trade unions were not new at UCG and the various grades tended to join different unions.  General operatives were first to organise in the 1940s and 1950s and initially joined the Irish Transport & General Workers’ Union (ITGWU).  Later, in the 1960s, technicians joined the Federated Workers’ Union of Ireland (FWUI), followed by senior academics who joined the Irish Federation of University Teachers (IFUT) and finally, more junior academics joined the FWUI in the 1970s.  These grades had high union density levels; had their unions recognised by management; and had a history of collective bargaining and extensive use of the industrial relations mechanisms of the State.

These unions, and others, were available to the admin staff but instead they chose a part-time Education Branch of the ITGWU as established by Pat Rabbitte. Pat was a former student activist who was known to them and who could work well with the leaders of the group, particularly Mick Conlon; both had been active in left-wing politics in Galway.

While recognition was the main issue in contention, the union focussed on the substantive issues: hours of work, maternity leave, promotional prospects and, crucially, a collective agreement.  After a year of ultimately pointless written communications nothing was achieved and the decision to strike was taken.

Pickets were placed on college gates on Monday 17th January and looked set to continue indefinitely.  The strikers were contacted on the previous Friday and ordered to hand over office keys and equipment, and they endured some hurtful catcalling from colleagues in other grades passing the pickets.  Forty-five years later a snide remark from one – “ye’ll be out ‘till March”- still rankles.

The next few days were just as difficult and almost chaotic. A caravan was sourced as headquarters and from where to collect and record union dues in order to apply for strike pay.  A chance remark by a taxi-driver to Fursey Breathnach (a local union organiser and father of one of the leading strikers, Liz Walsh) gave advance notice of the fact that UCG had been granted an injunction against them.  They then focussed on ensuring that this could not be served on Mick Conlon, named in the injunction, ultimately transporting him in the boot of a car!

College life continued as normal as lecturers and technicians worked throughout and there had not yet been any disruption for students. This was about to change however as left-wing student leaders sought to demonstrate some support for the strikers. Over a late-night meeting they cobbled together a motion to be put to a Students’ Union general meeting the following day; one mild enough not to upset conservative students and yet supportive of the strikers.  The motion passed and contributed to pressure on both sides to attend a Labour Court Conciliation Conference that night.

Another tense night ensued for the leaders of the strike; some attending the conciliation conference; others at legal consultations regarding the injunction.  Sufficient progress was made to allow a vote the following day and the proposals were accepted unanimously by the strikers.  Most important to the strikers was winning a collective agreement which stipulated the necessity for consultation and negotiation from then onwards.

The leaders of the strike, in addition to Mick Conlon, were four young women, Liz Walsh, Mary Cooke, Brid Carr and Catherine Lyons. These women were just out of school, mostly in their first jobs, and apart from Liz Walsh, had no union background.  Their then colleagues still recall their tenacity and persistence, and it is a credit to them that they subsequently forged a vibrant, active section of the union which went on to win significant improvements. A two-and-a-half-day strike for union recognition which packed in a High Court injunction; a late-night conciliation conference; an emergency Student’s Union general assembly, involving young female office workers on a campus which recognised all other unions – yes, even forty-five years later, it defies easy explanation.