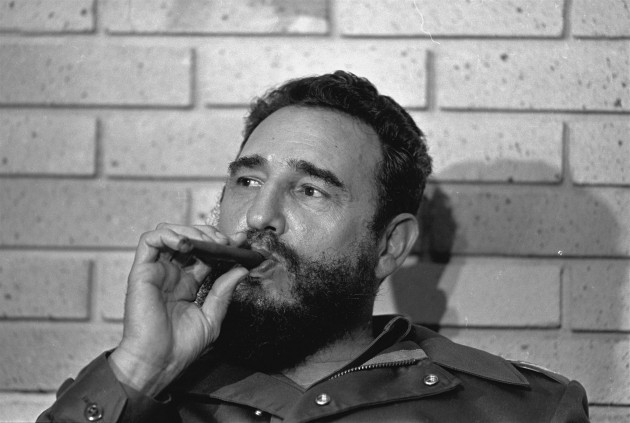 “And I was invited to speak with Nixon for about an hour and a half or so.  And I remember that he was interested in Cuba.  And I explained the real objective needs Cuba had to operate a series of social changes.  I remembered Nixon looked very young and listened to me with attention. And then we said bye….Later on I found out that immediately after our interview was over Nixon sent a memorandum to Eisenhower telling him that I was a Communist and that I had to be eliminated.”

So says Fidel Castro in one of the fantastic, dramatic openings of Blowback season two. The first season did a wonderful but difficult task in recounting the horrors and blunders of the US empire in Iraq. This season of Blowback focuses on the US covert and overt operations against Cuba following that country’s successful revolution in 1959.

One could learn everything about how the United States views Cuba by solely listening to the archival tapes at the start of each episode.

Nixon tells Eisenhower that Castro must be shot, CBS says the Cubans are incapable of speaking for themselves, Kennedy says Cuba is lost and must rise, and, most bafflingly, Trump tells Bay of Pigs veterans that they will have a free Cuba very soon.

US politicians haven’t changed at all. They were as blunt about hating sovereignty then as now.

The ten-part series examines a cascading series of crises in the Caribbean, including Operation Mongoose, the Bay of Pigs, the illegal embargo against Cuba and the threat of nuclear war – the titular blowback.

Each seventy five minute segment tackles a particular time frame and event. Most episodes address a period as small as three or four months between 1958-1963.

The strength of the soundtrack is exemplary, lending a dramatic quality to the narrative; interestingly reminiscent of contemporaneous wireless dramas of the late fifties and early sixties.

The hosts Noah Kulwin and Brendan James paint a complex picture of the sinister plots against Cuba by the US, a web of obsession spanning almost two centuries since the Monroe Doctrine. It’s a fixation that equates to an imperial hubris that is both myopic and incompetent.

One episode describes numerous terrorist attacks against Cuba in the early 1960s, including bombings and indiscriminate fire from a CIA gun boat at a hotel, while also describing a strange ice cream based assassination attempt against Fidel Castro.

It’s difficult to imagine the same organisation dreaming up both plots. However, this is the same alphabet soup gang who thought they could get away with an even more ludicrous plot against their own president – a plot that is also covered in the show.

Hosts Kulwin and James conduct various interviews with those from both sides of the conflict, including Cuban revolutionaries and Miaman counter-revolutionaries.

The primary sources present in the series are of immense value.

For anyone who doesn’t know about Cuba this is an intensive primer. For those who are well-acquainted with the communist island, there is still a good deal to learn from the show’s incredibly detailed research.