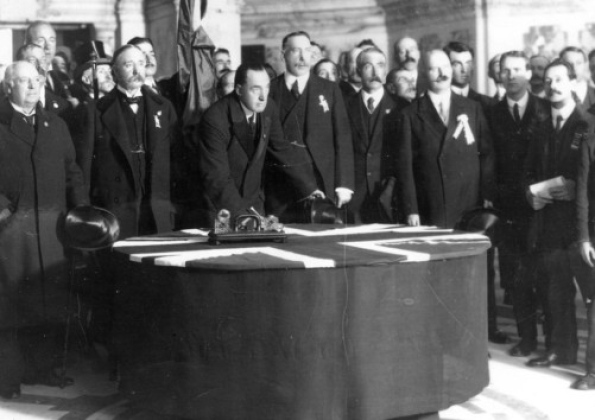 As we approach the centenary of the Anglo-Irish Treaty that both established the Free State and copper-fastened the nascent state of Northern Ireland, unionism is faced with a dilemma. On the one hand it is forced to defend institutions which the majority of unionism rejected in 1998 in an attempt to stave off the concrete effects of Brexit, which it supported.

On the other hand, the inability of Unionism to command a majority of the popular vote, combined with a surging Sinn Fein, means the Good Friday Agreement looks likely to force the leader of Stormont’s largest pro-Union grouping to play (symbolically, at least) second fiddle to Michelle O’Neill’s lead.

So, accept the GFA and its constitutional protection of the Northern Irish state, or reject it because of its capacity to facilitate the undermining of unionist hegemony.

Since the nineteenth century, the fear – variously of Catholics, nationalists, republicans (sometimes socialists or communists) – has been the motor of unionist unity. The putative threat that Catholic power would prove to the economic, spiritual, and political well-being of Irish (later Ulster) Protestants loomed large in the popular imagination and forms the fundamentally unchanging core of unionist ideology.

It is important, of course, not to confuse unionism with unionists. The capacity of people to hold broadly unionist views and resolutely oppose sectarianism has been proven repeatedly by many fair-minded and often notable individuals.

It is interesting to note that even the Alliance Party, which could be fairly described as ‘soft unionist’ (its founding articles stating, ‘We support the constitutional position of Northern Ireland as an integral part of the United Kingdom’), insists on not being unionist in principle, but merely in practice.

The failure of ‘liberal’ unionism to find its electoral expression is the result of this ideological opposition to the growth of the political and economic power of those traditionally identified as Irish Catholics.

The most startling manifestation of this contradiction at unionism’s heart is on display in the decades-long flip-flopping of the Ulster Unionist Party.

Even within the past few days, the UUP has gone from being lauded for its visual inclusion of Gaelic games and gay people in its imagining of the ‘New Northern Ireland’. Yet it remains incapable of admitting a willingness to abide by the rules of the GFA or to accept the post of a unionist Deputy First Minister alongside a Sinn Fein First Minister.

Implausible insistence on the imminent victory of a perennially conflicted Ulster Unionist Party aside, this refusal to abide by the rules of a game that it itself invented is another constant of unionist ideology.

The much-famed conditional loyalty of unionism positions it in a curiously undemocratic space. The refusal to accept Home Rule to the point of importing weapons in 1912, when the unelected, Tory-dominated House of Lords could no longer be relied upon to block it, is part of the mythic foundation of this ideology.

The first Anti-Partition League was a unionist one that insisted that Ireland be treated as a single entity within the Union. However, the impossibility of this under the growing appetite for independence across Ireland soon led to the abandonment of Irish unionism, in which the Irish (Protestant) people stood in for the demos, in favour of its Ulster variant.

This abandonment of ‘Southern’ Protestant unionists to the ignominy of Popish rule, in favour of an Ulster democracy  was soon challenged by the sheer volume of disloyalty within the nine counties. The Donegal, Cavan, and Monaghan unionists who cheered the elevated solidity of ‘Ulster’ were soon dismayed by their erstwhile abandonment in the realpolitik of state-building.

In short, the writ of unionist democracy has only ever run as far as the extent to which unionism (and not democracy) predominates. But the concrete basis of this majoritarian impulse has been slowly eroded by history.

Today, unionism’s pretensions to domination appear increasingly preposterous in the face of huge social, demographic and cultural changes that have reconfigured the political landscape.

Despite its fissiparous appearance, the essentially nationalistic attempt to subsume the differences within unionism under a single banner has been one of its enduring characteristics since at least the Irish Unionist Alliance of 1891. Its most recent incarnation – in joint opposition to the Northern Ireland Protocol – merely underlines unionism’s minority status and an attempt at retrenchment in the face of increasingly vocal calls for a border poll.

The undemocratic impulse at the centre of this opposition is clearly illustrated by the appearance of the Progressive Unionist Party in this new pan-unionist alliance. The inclusion of the political wing of the Ulster Volunteer Force, who garnered a mere 5,570 votes (0.7%) at the last election, serves only to give a concrete appearance to shadowy allusions to ‘unrest’ and threats of violence.

The reality is that unionism has nowhere left to go. Its undemocratic core leaves it with few options. Donaldson is desperate to maintain leadership of a dwindling congregation, Beattie will most likely be rent between the unsustainable illusions of liberalism and the demands of sectarianism, while Allister will continue to consolidate on the evangelical fringes.

With none able to produce a hegemonic leadership capable of sustaining and reproducing itself, unionism can only come to terms with an all-Ireland polity or (more imaginatively perhaps) opt for an undoubtedly violent repartition to re-establish the undemocratic majority upon which its existence depends.