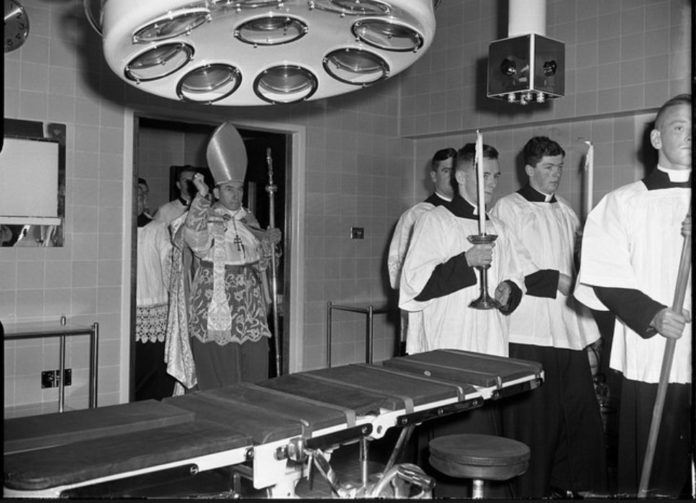 In the 1930s Dr Dorothy Stopford Price undertook a study which showed that, contrary to the belief that most adults had developed immunity to tuberculosis, only 11% of 14 year olds in Ireland had been exposed to the disease. This compared to contemporaneous rates of 56% in Denmark and 75% in Paris.

In short, Ireland was a country that desperately needed to address the risk of tuberculosis (TB) to the population. When a public health campaign started to come together, opposition didn’t arise from the cost or the science but from a sectarian campaign against its leaders.

Dorothy Stopford was born into a family that her sister would later refer to as “Irish Protestant ascendency with both parents coming from sound settler stock.” The Stopford children were dressed in black to mourn Queen Victoria’s death and they danced around a bonfire to celebrate British victories in the South African War. While studying medicine at Trinity, Dorothy accepted an invitation to spend the long weekend of Easter 1916 at the Viceregal Lodge (the weekend did not go as expected).

Martial law and the executions changed everything for Dorothy. She joined Cumann na mBán, canvassed for the Sinn Féin candidate in Wicklow, and attended the first Dáil. Her sister’s home became a safehouse for men on the run, including Eamon de Valera and Liam Mellowes. Dorothy’s first post-university job at the Kilbrittain Dispensary provided cover for her to also act as doctor to the West Cork IRA.

On returning to Dublin in 1923, Dorothy began working at St Ultan’s Hospital. Dorothy (Stopford Price as of her marriage in 1925) increasingly focused on childhood tuberculosis.

St Ultan’s Hospital encouraged staff to engage in further study abroad and so she undertook postgraduate study in Germany and visited hospitals in Austria, England, Paris and Scandinavia. She spearheaded tuberculin testing in Ireland, which improved the diagnosis of TB, and published the first report of tuberculin testing in the Free State. In the late 1930s she became the first person to begin importing the BCG vaccine and began trialling the vaccine on infants, importantly, with parental consent. Only wartime shortages delayed the publication of her book on childhood tuberculosis until 1942.

Her connections, experience, and drive might have been seen to make Dr Dorothy Stopford Price the perfect candidate to get a campaign against TB up and running in Ireland. Indeed, she had become convinced of the need for a dedicated national anti-tuberculosis campaign.

In 1940 some of her colleagues from the Royal Academy of Medicine in Ireland had met with the Minister and with local authorities to try increasing bed accommodation, dispensary staff, and financial support for families but to little success. Two years later, as told in Anne Mac Lellan’s Dorothy Stopford Price: Rebel Doctor, Dorothy began bringing together a small team of enthusiastic doctors to plan a national anti-tuberculosis league.

Throughout 1942 the group expanded to include more doctors, County Medical Officers of Health (CMOH), vets, and finally non-medical members, including Richard Mulcachy and Erskine Childers.

They kept the Church in the loop throughout. Dr John Duffy had informed Archbishop John Charles McQuaid of the planning group’s founding and had assured him they were not operating contrary to Catholic teaching. In November Duffy wrote to McQuaid that he had succeeded in having the League’s county branches placed under the CMOHs, “practically all of whom are Catholics, and many of them leading Catholic activists.” The Archbishop responded that “I approve and assure you in advance of support of Catholic Social Service Conference.”

As the crowd of doctors, social workers and public representatives started gathering at the Hibernian Hotel on 15 February 1943, it seemed to the organisers that everything was in order for the launch of the Anti-Tuberculosis League. It was not.

While the State was unenthusiastic about playing a part in responding to the TB epidemic, McQuaid saw the growing realm of social services and believed they offered a new space for Church control. In 1939 he had scuppered plans from the Civics Institute to set up playgrounds, children’s clubs and child-guidance clinics with the help of Dublin Corporation because they were not run by the Church, involved a partnership with municipal and State authorities, and would bring in professional social workers.

He had opposed plans to amalgamate St Ultan’s with Harcourt Street Hospital as it would “for generations to come, hand over Catholic children to an almost exclusively non-Catholic control”. Dr Monica Mary Lea-Wilson, one of his informants at Harcourt Street, wrote to the Archbishop that it was “not advisable” for Dorothy Stopford Price (a Protestant) to be running a dispensary at the Royal City of Dublin hospital (“mostly RC babies and children”).

Mac Lellan details McQuaid’s behind the scenes moves getting medical professionals, voluntary organisations and politicians on side to undermine the Anti-Tuberculosis League, which had a majority of Catholics on its proposed committee but too many Protestants and even a known atheist. As the public meeting began, Monsignor Daniel Moloney insisted on reading a letter declaring the Archbishop’s belief that while an anti-tuberculosis league should be established, it should be done under the auspices of the Red Cross. The league was over before it began.

Instead of an all-island campaign run by dedicated professionals capable of criticising the government, the Red Cross’s anti-tuberculosis committee operated only in the Free State, had a disproportionate number of members of the clergy and religious representatives, and focused its energy of forcing out non-Catholic members, including Dorothy. In 1948 the country’s Chief Medical Adviser, James Deeny, said of the Red Cross committee that “they began this work, carried out a short program and then folded up.”

In 1948, Noël Browne became Minister for Health and appointed Dorothy as chairman of the National Consultative Council on Tuberculosis. The next year he asked her to establish a BCG committee to work through St Ultan’s.

Noël Browne, Dorothy Stopford Price, James Deeny, and many others are rightly remembered for their work in eradicating TB in Ireland. But the uneasy fact remains that in the years 1943 to 1948 there were 22,034 deaths in Ireland due to pulmonary or non-pulmonary forms of TB and the disease continued to cause deaths for many years after. We are unlikely to ever know how many of those deaths could have been avoided if a public health campaign had been allowed to go ahead in 1943 instead of being destroyed because its very existence might undermine Church control.