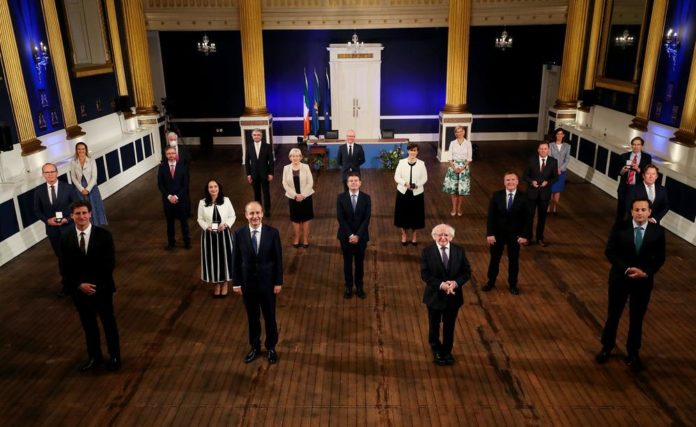 Stephen Donnelly cut a lonely figure at the Health Committee, even by the isolating standards of Zoom calls. Not one of the attending TDs or senators supported his plan for the new National Maternity Hospital. While each focused on a different aspect of the calamity, all agreed that the Minister for Health was proposing that the State spend an awful lot of money on a hospital, a hospital where procedures which are legal in the State may not actually be permitted.

The national politicians are not the only ones. Local authorities have been busy passing motions for the State to own the land the hospital will be built on. The public has joined in the protest.

But according to the infamous Public Spending Code, which sets out the value for money requirements for the evaluation, planning, and management of public investment projects, any project which costs over €100m has to go to the Government for approval.

Who will approve the approvers? We’ve taken a look at the men and women who will be sitting around the Cabinet table and making that decision. Is there anyone who might stand up for access to basic healthcare?

Taoiseach Micheál Martin came out in favour of repealing the Eighth Amendment when it was not a popular opinion with his party. In fact, it was suggested at the time that his views would put his leadership of Fianna Fáil at risk. But when it comes to making sure we can actually access abortions (or IVF, contraception, or sterilisation), where will the Taoiseach stand? In June he said that “from my perspective, the ideal position is that when the State had invested so much in a new hospital, that the State should own that hospital and the land on which it is built.”

It sounds good but be careful with “the ideal position.” When the suggestion was made that the State could own the land by using a Compulsory Purchase Order (CPO), the Taoiseach got scared, saying “You know the implications of the CPO. It can take a long time. And it could – let’s be honest about it – it could undermine the prospect of ever getting the hospital built. That has to be weighed up.” It doesn’t look like he’ll be willing to take a stand on this one.

The Tánaiste and Minister for Enterprise, Trade and Employment was Minister for Health between 2014 and 2016, during which time the plans to move the NMH from Holles Street to St Vincent’s were delayed again and again over fears about governance and independence. While Varadkar was Taoiseach, 2,000 people joined a ‘We Own the Hospital’ march and a petition against gifting the NMH to the Religious Sisters of Charity gathered 104,000 signatures. So it’s probably fair to say he has a few bruises from the issue already.

That’s probably why the Tánaiste has been doing what he does best: spinning. Yes, he announced that the Government wasn’t happy with the current proposal as it had issues around the lease, governance, and make-up of the Board. But he has also said that he’s “confident” that all the issues can be resolved, adding “I don’t have any concern about any procedure that’s lawful in the state being performed in the new National Maternity Hospital.” As he provided little or no backup to the statement, it seems the Tanáiste is hoping that if he says something positive repeatedly the problem will cease to exist.

The Minister for Transport, Environment, Climate and Communications is the third party leader in Government. Back in 2017 (when he was in opposition) Ryan tweeted: “The new National Maternity Hospital should be publicly owned. I am joining those asking Sisters of Charity to gift the site to the State.” More recently, he told the Dáil: “We need to proceed but will only do so on the basis of the hospital not having any clinical, operational or other leads other than the State. That is reflective of what was set out in the Irish Constitution following the repeal vote, which is that such services will be available to all our women, including in our new national maternity hospital.” He even went on to assure deputies that the Government was not divided on the issue.

Of course, Ryan didn’t explain how exactly independence was going to come about, so his stance isn’t all that different to his blueshirt colleagues. High profile Green Party members like Neasa Hourigan TD and Hazel Chu of Dublin City Council have been clear that the only way to ensure independence is for the State to own – not lease – the land the hospital is built on. Will Green Party members accept vague assurances that despite all the evidence to the contrary, everything will turn out ok because Eamon Ryan says so?

His officials must have hoped that the Minister’s appearance before the Health Committee might soothe fears about the new hospital. But Stephen Donnelly had other ideas; his main aim seemed to be to try intimidating his former party colleague, Róisín Shortall. Worryingly, Donnelly didn’t seem to entirely grasp the issues, suggesting that ownership of the hospital site was “mainly symbolic.” It could be possible that the Minister is so obsessed with getting to be the one to finally cut the ribbon on opening day, that he just doesn’t want to understand (or even know) the problems with paying €800 million or more for a building when you can’t ensure that legal procedures will take place there.

But could his bullish and selfish behaviour cause Donnelly problems at the next election? 74.3% of his Wicklow constituency voted to repeal the eighth amendment (at 74.5% turnout) and feminist organising seems to have carried over post-referendum, particularly in the north of the constituency. A trade union and feminist delegation has already protested outside the Minister’s office on the issue and at the end of July, Wicklow County Council voted by 21 to 6 in a call for the hospital to be built on State land.

The Minister for Public Expenditure and Reform is in a bit of a bind.

But the Minister has also publicly accepted that this put Fianna Fáil at odds with the vast majority of the population.

What’s more, he’s the Minister in charge of ensuring that projects achieve value for money. His own Department has already written to the Department of Health saying they can’t cut corners in assessing the value for money of the new NMH. Between spiralling costs and not being able to provide legal public services, it’s hard to see how McGrath will be able to approve the project with a straight face. Though when has that ever troubled a Fianna Fáiler?

Let’s not kid ourselves. The Minister for Finance only cares for vultures, not humans.

But Dublin Central voted 76.5% in favour of Repeal. Could any of the myriad parties or campaign groups in his three-seat constituency make Donohoe nervous about backstabbing repealers?

The Minister for Housing campaigned to retain the Eighth Amendment, and while he may have voted for the abortion legislation once repeal won, it wouldn’t seem that our access to healthcare is at the top of his priorities.

The twists and turns of Coveney’s slow and confusing conversion to Repeal definitely gave the impression that he was more interested in the limelight than the issue. And with his penchant for giving away land to developers, getting the country to fund military expenditure despite public support for neutrality, and secretive appointment procedures, the Minister for Defence and Foreign Affairs would not be the one to look to when it comes to democratic access to basic human rights.

The Minister for Agriculture was not only for retaining the Eighth Amendment, he abstained when it came to voting on the Abortion legislation in 2018. It’s safe to say he’s unlikely to be an ally on this one.

While she voted for Repeal, in 2019 the Minister made a halfhearted defence of the Government decision on the NMH, saying:  “The religious ethos will not interfere with the provision of medical care. I am advised that the agreement ensures that a full range of health services will be available at the new hospital without religious, ethnic or other distinction.” Well, if you believe that …

There was a time in Irish history when, excited by a couple of sassy pro-repeal remarks, people ignored that as Minister for Health he had tried to gift the NMH to the nuns or that he’d had to be dragged to Repeal, and declared that they fancied Simon Harris. Nowadays, obviously, most people prefer to exorcise that time from their memory and there’s probably only one person who misses it: Simon Harris.

But might the Minister for Higher Education’s ego be the key to ensuring access to reproductive healthcare? Perhaps, if focused towards undermining his constituency rival, the current Minister for Health, Stephen Donnelly. In fact, it seems possible that’s already going on. It’s unlikely Peter Boylan would have said that Harris told him Government was considering a Plan B for the NMH had the Minister not given his approval. And almost all the Fine Gael councillors in Wicklow voted in favour of a recent motion calling for the NMH to stay public.

It might even be that Harris’ wish to defeat Donnelly is strong enough that we can get basic reproductive healthcare without any sacrificial “I fancy Simon Harris” tweets.

The Minister faces the same difficulties as the rest of her Green colleagues: how many more times can they get away with decisions that are disastrous for the people of Ireland without destroying their party (again).

If his handling of the report into Mother and Baby Homes is anything to go by, the Minister for Equality needs a mass, well-researched, and well-coordinated campaign before he’ll even consider standing up to the Church or other vested interests

The Minister is currently on maternity leave.

In a July 2020 interview with the Sunday Independent, the Minister for Education indicated an openness to adding restrictions to the country’s abortion legislation. So she probably doesn’t care that much about making sure we can access abortions at the NMH.

Having listened, asked questions, and thought a good deal, in 2018 Hildegarde Naughton announced that while she herself was pro-life, she had come around to Repeal. Might it be worth a shot trying to get the Minister of State to listen to a few well-reasoned arguments about not just voting for human rights but providing the infrastructure so they become a reality? Ok, we might be getting a little desperate now.

Don’t bother. We’re not convinced he even thinks women are people.

When Fine Gael and Fianna Fáil wanted to soften the Greens up prior to the General Election, they allowed Pippa Hackett to run unopposed for a vacant Seanad seat. The Senator may have campaigned sincerely for Repeal, but if the options are ensuring access to basic healthcare for rural Ireland or keeping the coalition partners happy, we know where we’d put our money.