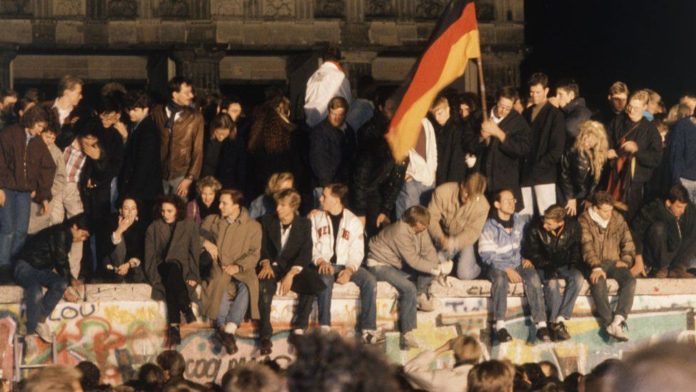 At the end of 2020 Sinn Fein released a document suggesting that “The experience of German reunification serves as a useful example of how planned economic integration and investment, including from the EU, can substantially improve economic conditions in the smaller jurisdiction involved in transition.”

This is nonsense. By any index, quality of life within the German Democratic Republic (GDR, or East Germany) fell dramatically following the effective annexation of that state.

Ireland is discussing the possibility of a referendum and civic forums; that conversation never happened within the German Democratic Republic.

Sinn Fein, however, warm to the theme…

“While the economic output and living standards of Germany’s East have not kept pace with West German development, they have, by any measure, improved dramatically. East German GDP per capita was just 43% of the same Western measure in 1991. By 2008 it had risen to 71%36. When considered in a European comparison using the comparative measure of purchasing power parity (PPP in euros), East German GDP per capita rose faster than other more deprived European states, perhaps a fairer and more robust comparison than the industrial and economic powerhouse of then West Germany. Much of this was assisted by considerable EU support including through structural funding totalling just shy of €18 billion.”

Sinn Fein is leaning into misleading statistics for this ‘analysis’. They try to conflate the rise of GDR Gross Domestic Product (GDP) per capita with Purchasing Power Parity. This is meaningless given that the purchasing power and the nominal GDP of the GDR was always higher than other Eastern European states.

The GDR shouldn’t be compared to the Federal Republic of Germany (West Germany) in GDP, as GDP is always higher in capitalist countries. GDP calculates the productive output, consumer input, and net profits. As socialist countries lack private industry to accrue profit and consumer goods are subsidised, the use of GDP for the GDR by Sinn Fein creates a meaningless picture.

The introduction of capitalism into the GDR would have changed the GDP statistics regardless of “re-unification”; the same cannot be said for Northern Ireland.

Sinn Fein additionally advocates for Ireland to buy into an EU debt-trap that would be ruinous for both Northern Ireland and the Republic of Ireland.

It is worth pointing out that the absorption of the GDR into West Germany resulted in NATO membership for the former. This happened on the condition that a United Germany would stay out of conflicts and that no bases would be built in the former GDR territory. These promises were reneged before the end of the 1990s.

Irish military personnel have already made proposals that would yoke NATO membership to an unification process. A united neutral Ireland would be very unlikely if the government were to use the German unification approach.

Not such a perfect union

The success of reunification can be judged by the extent to which mutual cooperation, planning, and respect defined the process. The popularity and demand for a unified Germany, the level of collaboration at negotiations, and the conditions for economic assistance to enable transition are aspects that are overlooked in Sinn Fein’s reckoning. Furthermore, the events surrounding the reunification of the GDR and Federal Republic of Germany (FRG, or West Germany) demonstrate that unity is a less than accurate description.

In most analyses and reviews of the events of reunification, one dimension is typically overlooked – that of imperialism.

Or more succinctly, by John Darwin’s account: “Imperialism may be defined as the sustained effort to assimilate a country or region into the political, economic or cultural system of another power.”

Based on public opinion from the time of die Wende, unification and the dissolution of the GDR were not as popular as they are currently remembered. That the FRG followed a particular course of action – in light of viable, fairer alternatives – demonstrates that the interests of the FRG were closer in nature to imperialistic expansion rather than the unification of two peoples.

The reunification process was by no means a willful connection of two states. Rather, as the process unfolded, it became clear that the Federal Republic was annexing the GDR and its assets. Even from the beginning, the FRG pushed against popular demands for a separate, sovereign, and socialist GDR, or confederation between the two states, and instead took the opportunity to weaken GDR borders.

People from the GDR had little or no say in the process as demonstrated by the lack of referendum and the violent FRG response to protests. Ultimately, the economic and currency crisis caused by the FRG was, perhaps, a significant reason that the results of the March 1990 elections turned out the way they did. It quickly became clear that the Federal Republic had little regard for the consequences faced by the residents of the former GDR.

Many former GDR citizens now regret the unification process. Many more feel that Germany is divided. It has also become increasingly expensive for the German government to stabilise the country it over-exploited in the early 1990s.

These large expenses, which predominantly fall to the older citizens of the Federal Republic, only serve to breed further resentment and hostility toward those from the economically broken East.

At face value these taxes may be taken as support, but much of this investment is going towards businesses that are in the possession of former western Germans. This is a matter of public record as Annual Reports on Unity indicate.

West German taxes pay for the Western German owners of East German businesses who benefit from East German labour and resources. Such a process is also found in empires where the “centre is bled so that the perimeter can continue to expand”.

According to Johan Galtung, imperialism concerns the relationship between the “Center and Periphery”, in particular in the spheres of “economic, political, military, communication and cultural imperialism”.The dominance of the FRG in the fields of economy, politics, and media satisfy Galtung’s criteria, and while there was no military conflict between the FRG and GDR, the shoddy treatment of the Neue Länder soldiers as second class citizens should not be ignored

Far from being a model of territorial integration, German reunification was a disaster for many involved, the consequences of which still play out and which have contributed to the rise of AfD in the former GDR. Such a model applied to the island of Ireland would be disastrous.