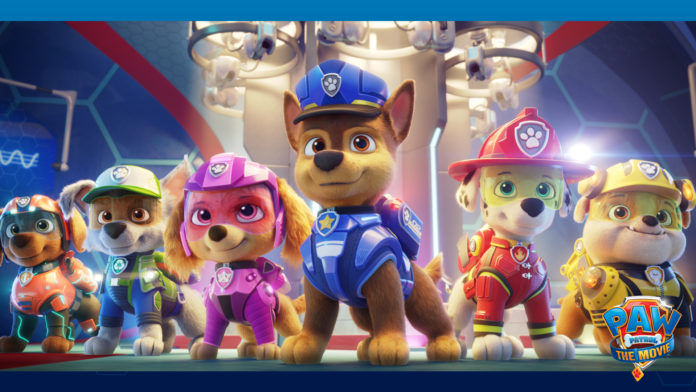 “I already am eating from the trash can all the time,” said Slavoj Žižek in his astute, entertaining documentary-essay, The Pervert’s Guide to Ideology. “The name of this trash can is ideology.”

Where Paw Patrol is concerned, the name of this trash can, more specifically, is fascism. (See also the trash can of misogyny: the misogyny of condemning girls to pink-attired, feminised behaviours or, in the case of female politician Mayor Goodway, bumbling incompetence.)

In the opening sequence of Paw Patrol: The Movie, the driver of a juggernaut hanging precariously from a bridge calls for the police and emergency services, only to be cheerily informed that no such frontline help exists in the benighted town of Adventure Bay.

The unfortunate man is, instead, entirely at the mercy of the unaccountable, private crypto-fascist militia known as Paw Patrol.

The latest film released from this sinister billion-dollar franchise – there have been two prior theatrical outings, despite gaslighting marketing efforts insisting on the contrary – sees unelected human leader Ryder journey to the city with his talking “rescue” dogs.

The movie repeatedly decries existing public services, including the subway, while the vigilante crew take to the streets. We say crew. We mean a collection of individuals: much of the film’s narrative concerns Chase, the leading German Shepherd, feeling inadequate after relying on his colleagues to perform his duties.

The Patrol’s newest recruit and biggest cheerleader is, with a nod to the “freedom fries” of Gulf War II, Liberty, a street dog. Liberty is introduced as a lone enforcer, one who imposes littering laws with the threat of violence.

Moments later, she ignores the “no dog” policy of the city’s new Trumpian leader, Mayor Humdinger. He, it is alleged, was elected in a rigged campaign, a dubious platform that still accords more legitimacy than the Paw Patrol can claim.

Liberty’s name, her pronounced American accent, and her eagerness to invite a private militia to take charge of the city act as mute play for so many disastrous American imperialist adventures, including excursions in Iraq, Afghanistan, and Libya.

The latter campaign’s association with failed presidential hopeful Hilary Clinton and her supporters’ petulant response to her presidential bid’s failure – sidenote: her Libyan campaign has made Libya the child slave market capital of the world – trumpets the à la carte progressivism of neoliberal thought. It’s a doctrine that inevitably leads to such slippery slopes as ‘lesser evilism’.

In an extensive TV interview last year, King’s University College criminology professor Liam Kennedy deconstructed Paw Patrol’s depiction of the state as being in a permanent funk of neoliberal lesser-evilism: “Mayor Humdinger is portrayed as unethical and corrupt. Mayor Goodway as hysterical, bumbling, incompetent. […] I would argue that the Paw Patrol, as a private corporation, is used to help provide basic social services in the Adventure Bay community. That’s problematic in that the Paw Patrol creators are sending this message that we can’t depend on the state to provide these services.”

This idea, argues Kennedy, has chilling implications for young, impressionable viewers: “I just think that as time goes on, children might be less likely to critique the capitalist system that causes environmental harm in the first place and reproduces inequality.”

Paw Patrol: The Movie goes further than Kennedy’s welcome analysis of the television series. By transplanting the meddlesome pups to a larger lebensraum, the new film raises the unwelcome spectre of imperialism.

“As I shall be using the term,” wrote Edward Said in 1993’s seminal Culture and Imperialism, “‘Imperialism’ means the practice, the theory, and the attitudes of a dominating metropolitan centre ruling a distant territory; ‘colonialism’, which is almost always a consequence of imperialism, is the implanting of settlements on that distant territory”.

Similarly, Michael Parenti writes that: “Imperialism is the process whereby the dominant politico-economic interests of one nation expropriate for their own enrichment the land, labour, raw materials, and markets of another people.”

Paw Patrol’s native Adventure Bay may not be a dominating metropolis, but the imposition of the Patrol’s own private sector values upon Adventure City mirrors Said’s definition. The Patrol’s descent upon the city, meanwhile, reinforces Parenti’s ideas.

Liberty’s collaboration with the interlopers of Adventure Bay, additionally, recalls such historical collaborations as the British East India Company recruitment of Indian troops in the mid-eighteenth century, an effort of collusion which ensured that in 1806, as the Vellore Mutiny broke out, the revolutionaries had to contend with the might of 154,500 recruits and one of the largest standing armies in the world.

Victoria’s army stood for Victoria’s interests. Paw Patrol, in keeping with Michael Parenti’s writings in The Face of Imperialism, are all about the market; “The purpose of the US global empire is not the pursuit of power for power’s sake but power to fashion the world into a corporate dominated global free-market,” he writes.

That market, lest we forget, is dominated by the military-industrial complex.

Walt D, writing in Medium in 2018 noted that: “In 2014, the same year that Paw Patrol writers equipped Chase with a drone, the Obama administration used drones to kill 1,147 people.” The links between police brutality and US imperialism, particularly in the months following the murder of George Floyd, have been increasingly and alarmingly probed.

In an extensive conversation between activist-journalists Max Blumenthal and Ben Norton and anti-war veteran Camilo Mejía last year, the links between George Floyd’s murderer Derek Chauvin, and the military were teased out, noting Chauvin’s training at Fort Benning, “…a base named after a Confederate general that is home to the School of the Americas, where the US Army has trained countless Latin American dictators, death squads, torturers, assassins, and coup-plotters.”

Where exactly did Chase and Ryder train, again?