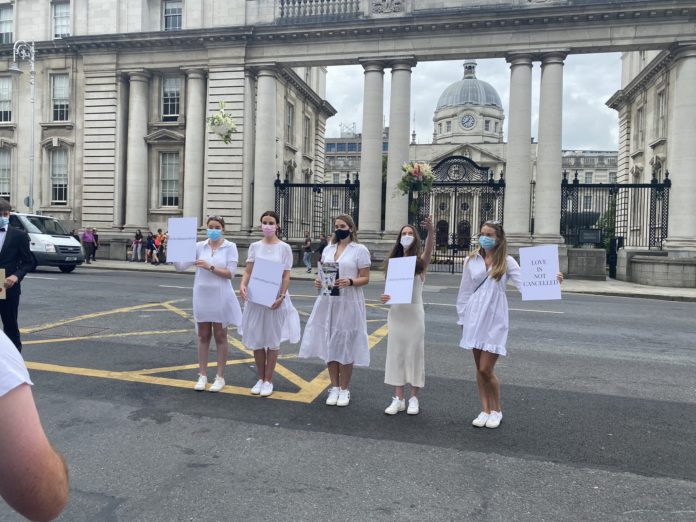 A protest by “brides” outside Government Buildings on Tuesday has provoked an angry response.

The Wedding International Professionals Association (WIPA) called the protest to demand that the numbers attending weddings be increased from 50 to 100, which the Cabinet was agreeing at that time anyway.

Five protesters dressed in white dresses posed outside the Department of Health and then on Merrion Street advertising the WIPA’s guidance to scaling up wedding attendance.

The backlash was immediate.

Twitter users called for a sense of proportion. Many pointed to the numbers who had died alone, who had not been able to attend funerals of loved ones, or who had gone through difficult diagnoses without support.

“I can’t help but feel it’s a bit tone deaf. Are people aware there are pregnant women going through labour alone? Going to [appointments] alone? Being told they miscarried their baby alone? Why is women’s healthcare never a priority in this country,” said one Twitter user.

Another Twitter-user said that: “Very little time that you couldn’t get married during this. This makes me wanna wretch – and I make bridal wear. How in love you are is not measured by the size of the party after you get married. Catch a grip.”

Eagle-eyed sleuths quickly noticed that the “brides to be” were not wearing engagement rings and began to question whether the incident had been a protest or a promotional event. A post on Reddit by a user claiming to work in the events industry set out the background to the “protest” and called out the Irish media for treating industry lobbying as a legitimate demonstration.

On Tuesday evening the Department of Health reported 1,120 confirmed cases of Covid-19 in the Republic of Ireland. 142 people were hospitalised with the virus, of which 27 were in ICU.