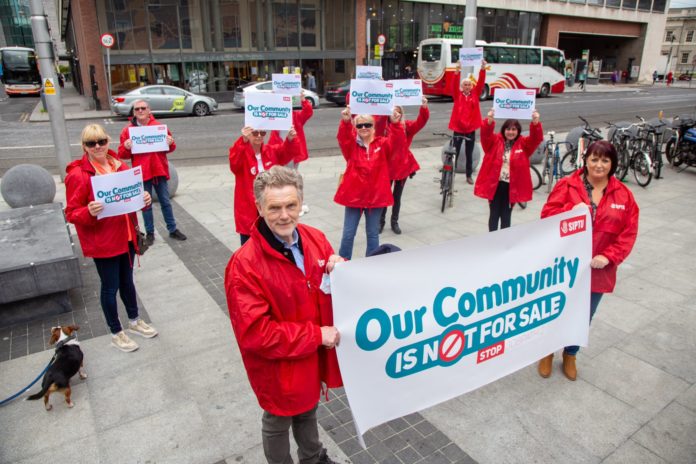 The trade union SIPTU has stepped up its campaign against the privatisation of local employment services with a protest outside the Department of Social Protection on Friday last.

Since the 1990s, community-based Local Employment Services have provided assistance to unemployed people, with supports ranging from literacy to interview skills and job placements.

In May, the Department issued a request for tender (RFT) to expand employment services across seven counties in the north-west and midlands, where an LES does not currently exist. The Minister admitted that the tender will establish a “new multi-annual funding approach, which pays for each jobseeker referred to the service.”

The Department is also preparing RFTs for when the current contracts for all contracted public employment service provision expire at the end of 2021.

SIPTU has accused the government of beginning a process of wholesale privatisation of local employment services.

In response to Minister Heather Humphreys’ assertion on 1 July that the process will not lead to the privatisation of the service, Kane said: “We absolutely reject that analysis. Let no one be in any doubt that the tendering process is designed to force community based programmes out and bring in the profiteers.”

SIPTU has proposed pausing the tendering process to allow for a structured stakeholder forum, which would include existing community providers, services users and trade unions.

“We wrote to Ms Humphreys on 16th March calling for an emergency meeting on this issue but she is yet to respond directly to us,” said Kane.

“However, we do note that the Minister has now said in the Dáil that she will meet with all stakeholders. We would call for this vital engagement to happen without any unnecessary delay.”