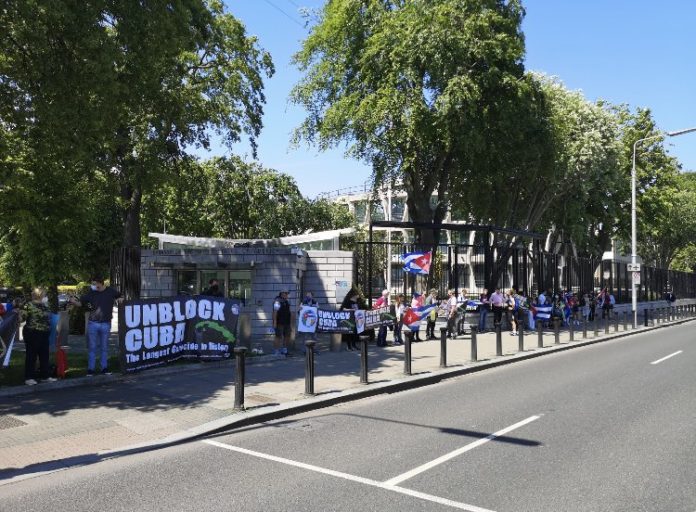 Protests against the continued US embargo and blockade of Cuba took place across Ireland this weekend.

Coinciding with worldwide demonstrations, the protests in Belfast, Cork, Derry and Dublin aimed to show solidarity with Cuba ahead of the annual resolution in the UN General Assembly condemning the US blockade of the island.

In 2020, Cuba decided to postpone the resolution due to the Covid-19 pandemic. The previous year the vote passed 187-3, with only the US, Israel and Brazil voting against.

Speaking outside the US embassy in Dublin, Eleanor Lanigan of the Cuba Solidarity Forum Ireland said: “I am here because I strongly object to the blockade that has been in existence against Cuba since 1961. It’s outrageous.

“Cuba has done nothing but help other countries. The export doctors. Our western societies seem to export military. Cuba helps everybody. They’re internationalists.”

A loosening of restrictions during the Obama-era had led to a belief that the blockade and embargo have been lifted.

“When Obama came into power there was a sort of détente where he opened up certain things like embassies and that. But what he didn’t do – and what he couldn’t do as an American president – is undo what Congress has done, which is the blockade. That can only be done by Congress and there is no sign of that happening.

“And then unfortunately when Donald Trump came into power he undid any kind of opening that Obama had tried to do. So it went back to square one again. And the last thing Trump did on leaving office was to put Cuba on the terrorist list.”

The designation has not been reversed under Joe Biden.

Listing the broad range of materials, including food and medicines, within the blockade, Lanigan explains that it is important to raise public awareness and to show that there is opposition to the US policy.

“They used to surround towns in medieval times and starve people. This is the modern version of trying to starve a country.”