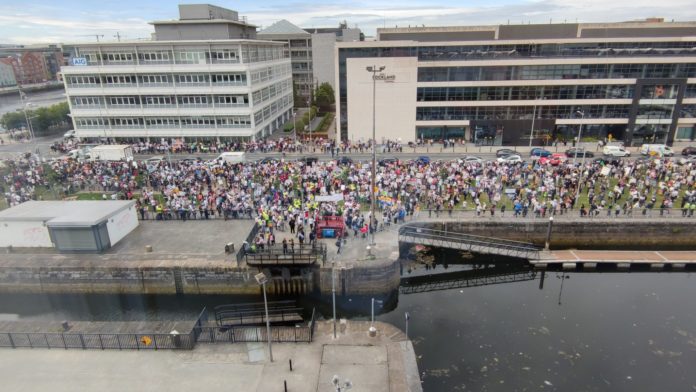 “I’m here to support my neighbours,” said Bríd McGonigle from Carndonagh. “All of my neighbours who’ve built houses in the last 25 years have mica and their homes are crumbling.

“It’s just shocking. Everywhere you go the buildings are crumbling.”

Noleen, another protester, added:  “I’m here from Donegal today to protest against the mica fiasco. We all know people in Donegal that are badly affected and losing their homes.”

The mica in defective blocks sold to builders of both homes and public buildings attracts moisture from the environment, causing cracks and, eventually, crumbling buildings. There are estimates of between 5,000 and 10,000 affected homes, primarily in Donegal and Mayo.

“There’s an idea that contractors and maybe shoddy building practises  contributed to the growing problem,” says protestor Tommy McGinn. “A couple of politicians have said silly things to this. They’ve said architects need to take responsibility or the insurance company needs to take responsibility. But you can’t just open a quarry and sell blocks. It takes legislation. It takes paperwork. The Government approved all that.”

Ahead of the 2020 election, the last government announced a support scheme, with the State providing 90% of renovation costs. Critics noted that the equivalent  pyrite scheme in Dublin offered homeowners 100% of costs. Others  have pointed out that homeowners trying to access the pyrite scheme did not face costs of  €6,000 for the tests which would, in turn,  allow them access the scheme.

Bríd McGonigle says that she wants to see 100% redress for the affected families. “There should also be compensation for them when they have to move out of their homes. Maybe have accommodation available. They may need to set aside social housing that families can move into temporarily. So that’s what we would like today. And we want a public inquiry into why this happened as well so that it doesn’t happen again.”

“People have been looking for this for years. So there’s anger and fear and frustration. We feel that we’re the forgotten county,” says Noleen.

The issue hasn’t gone unnoticed by other housing groups around the country. Members of the tenants union CATU turned up to support the demonstration.

“Also, we see it as a way to look at the similarities across different tenancy types and how the need to turn housing into a commodity and a source of profit is damaging people’s lives and their environment. So not only is it difficult to be a private renter, Cassidy’s are cutting costs in producing blocks and that’s putting people’s lives and health at risk across different types of tenancy

“So I think it’s part of a crisis of community generally and it’s important that we push back against this sort of increased commodification of our homes and our communities.”

The protest has prompted the Government promising an immediate review of the scheme, with a report back within six weeks.