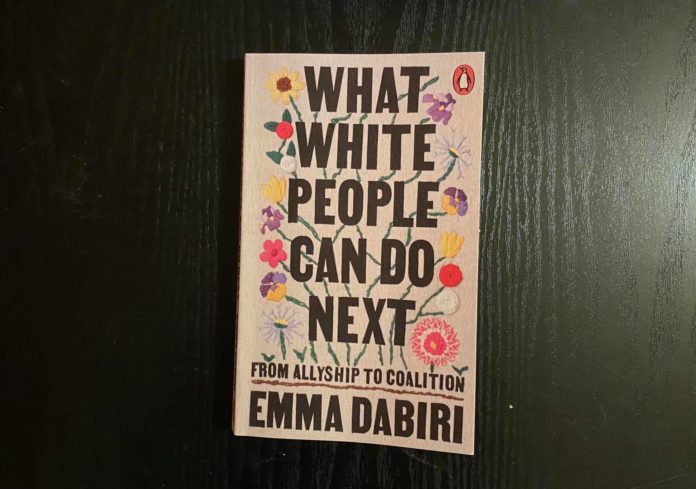 In 1661 the Barbados Slave Code came into effect. Officially known as An Act for the better ordering and governing of Negroes, the Code marks the first time that race (and racism) was codified into law. Pre-code there were people with different physical features, now ‘white people’ and ‘black people’ existed as separate races.

The Barbados Slave Code would go on to inform other Slave Codes, including the Virginia Slave Codes. In Virginia, the colonial elites’ response to the terrifying prospect of indentured Europeans and enslaved Africans finding common cause – as they did during Bacon’s Rebellion – was to introduce a series of laws to divide them, giving the former control over the latter. The draconian and divisive 1705 Virginia Slave Code became a model for other North American colonies.

Even if Emma Dabiri had stopped writing for a general audience after Don’t Touch My Hair and gone back to full-time academia, she’d still have made an impressive contribution to the current political moment, having helped a new generation of readers think about the way in which Western stereotypes about Africa deny black peoples’ humanity (and get in the way of imagining alternatives to life under capitalism). But, being some sort of over-achiever, she instead has followed up with What White People Can Do Next, a book which dares readers to think more deeply about how – and why – those ideas about race came to be.

Race has a start date and a specific purpose for which it was created: to dehumanise black people so as to justify their enslavement and, conversely, to convince white people to identify with those who have similar physical features over those with similar interests.

Trying to fight racism without recognising that racial categories are invented, without recognising that whiteness itself is “an erasure, a generic term that collapses crucial distinctions in order to consolidate capital”, means only ever trying to get as far as making white people more polite. Leaving whiteness alone means leaving the lie of white superiority alone, as if it were a natural occurrence.

Dabiri sees allyship as falling into this trap of reinforcing whiteness. Accepting racism and capitalism on their own terms, allyship hopes for charity, white saviours, and individual self-improvement.

But knowing that anti-racism didn’t start in 2020, Dabiri looks back to find inspiration from the past, drawing in particular from the Black Radical Tradition. Instead of trying to convince people to give up something (especially if ‘whiteness’ is the only thing they have) or make vaguely defined transfers of privilege, Dabiri proposes that the only approach with any chance of success is to form coalitions based on shared interests. This means looking at power instead of privilege. It means looking at capitalism.

The Irish interest in Dabiri’s project isn’t limited to name-checking, although we do love to be included among the big countries. Drawing on Ireland as an example of why you can’t just copy and paste from one context to another, Dabiri provides a way of responding to “but Ireland was colonised too”.

If, rather than being a naturally occurring phenomenon, the race myth was created in a specific time and place, it will, accordingly, have developed differently and variously as it spread over the world in the following centuries. So expecting racism to look the exact same as it does in Minneapolis or London will lead to blinkers against the reality of Tullamore or Greystones.

Equally, we can’t lift our responses wholesale from one location to the next. Ireland, Dabiri suggests:  “would do well not to take too many cues from either the US or the UK, and to invest instead in the development of a culturally and geographically specific response to racialization on the island of Ireland”.

It would have been interesting and informative for Dabiri to have discussed the interactions between race in the British empire and the Spanish, French or Dutch empires. It might also have been interesting to see her engage with the practicalities of building coalitions that have shared goals but don’t “fixate on an endpoint or final destination”. However, as it is, she fits a lot into a very readable 160 pages.

In fact, the book’s size and title might cause some to skip it, confusing What White People Can Do Next for the very culture it’s critiquing. And for that they’ll miss out on a story that’s compelling, brutally honest, and hopeful.