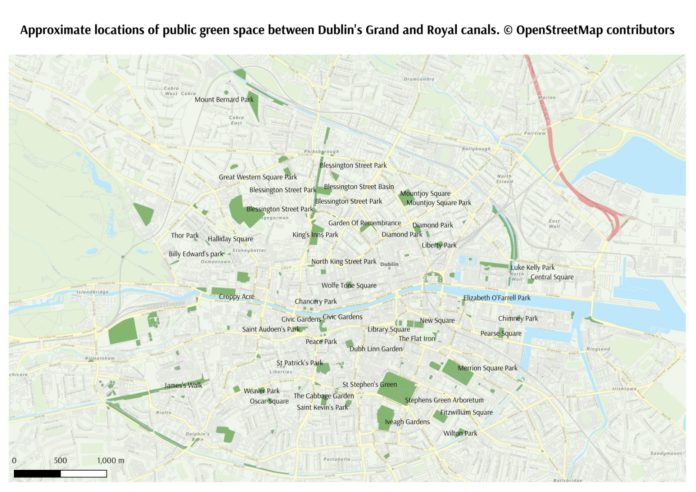 Seemingly illogical statements by Dublin City Council staff on RTÉ this week have caused uproar and have inspired one map nerd to provide a map of green spaces between the canals.

Following the release of videos showing a large crowd gathered on South William Street, Dublin 2, calls were made on Saturday for Dublin City Council to facilitate outdoor recreation in line with the Government’s announcements regarding an “outdoor summer”.

The calls included such practical amenities as more bins, benches, and public toilets, as well as longer opening times for St Stephen’s Green and Merrion Square.

However, during an interview on Today with Claire Byrne last Monday morning, the local authority’s Director of City Recovery, Coilín O’Reilly, publicly rejected the proposals.

“We feel that if we provide toilets and bins at these locations it will only drive more football and create more of an issue from a public health perspective,” he said.

He also called for Dubliners to demonstrate personal responsibility and highlighted the actions which the local authority had taken in order to assist businesses in adapting.

The interview was met with derision, with many online questioning whether Dublin City Council understood the purpose of its own existence.

One frustrated map nerd has provided LookLeft with a map of all the public green spaces in Dublin between the Royal Canal and the Grand Canal, with the suggestion that Dublin City Council could use such a map to plan an “outdoor summer”.

Or readers can use it for their own planning.

The full interview is reproduced below:

Claire Byrne: Coilín O’Reilly is the Director of City Recovery with Dublin City Council. Good morning to you.

CB: Thank you for joining us. You’d a busy weekend. How long did it take to clean up those areas we were talking about on Sunday?

CO’R: The guys were at it from early yesterday morning so 4, 5 hours went into it by six or seven guys and they got to the end of it by some time mid-morning yesterday. It took a fair amount of time. There was a fair amount of clean up.

CB: So listen, the decision was made and we were talking to Owen Keegan from Dublin City Council about this, closing off the Portabello Plaza but it does seem that it just moved the problem.

CO’R: Well I suppose Portobello Plaza was a very specific set of circumstances. I’ve said this on the record before, that’s a residential area so the street party in inverted commas was happening around people’s homes. We’re in a very difficult situation. We’re criticized for not managing these unplanned mass gatherings  but you can’t take actions to condone or support them as well.  There’s two very separate issues. We have toilets and bins on one point and we also have public health guidelines. We feel that if we provide toilets and bins at these locations it will only drive more football and create more of an issue from a public health perspective.

CB:  So if you create the facilities more people will come.

CO’R: Well that would be be what we would feel would happen. As it is nationally,  and I know you’ll be talking to the minister later,  we’re looking at controlled and structured test events for 100, 200, and 500 people in the coming months, not even in the coming weeks. And that’s certainly not what what we saw in the city centre at the weekend.  We’re somewhat stuck  in that we have gatherings of this size. If we supply more toilets and bins does that bring more people in?  Do we end up with bigger public health issues?  It’s a very difficult public health situation to manage and I do take your previous caller Dylan’s point there  on board  and absolutely I’ve great sympathy for the businesses that deal with it as well as as my colleagues in Waste Management have to clean up this on a daily basis.

CB:  There’s a suggestion from a counsellor who’s quoted in the Times Ireland edition today saying that St. Stephens green and Merrion Square should be open later; that would take the problem off those streets where the businesses are.  Would that work?

CB:  So what are you going to do  then ahead of next weekend?

CO’R: We’ve are meeting actually at 10:30  this morning with businesses on the street, An Garda Síochána,  and other stakeholders and to see if there’s any other actions we can take to improve the situation. We obviously don’t want to shut a city Street. I think that will have a detrimental effect for businesses on the street as well as citizens. We are very keen to facilitate an outdoor summer.  I think the problem is what is the definition of an outdoor summer and people’s definition of an outdoor summer and from our point of view that’s the street interventions we’re putting in, the facilitation of outdoor dining, the hundreds of street furniture licences we’ve been issuing over the last few weeks, and working with businesses to get them out into the streets. it is very difficult for us. Events like this take many months  and even years to plan and if we were to do a risk assessment, crowd control plan, suitability, location and the type of event we wouldn’t be organising an event like this on South William Street. So we wouldn’t be allowing it to happen anyway.  We are in a hugely difficult situation.  We’re just trying to work our way through it and if there are any actions we can take to improve the situation for businesses on the street we will.

CB: What  happened last night? Because I saw on social media, I was saying to Dylan, that it appeared that guards were stopping people from going into those areas.  Are you aware of what was happening?

CO’R: I’m not fully aware. I know on Garda Síochána put an operation into place.  An fairness to An Garda Síochána they’re also in a very difficult situation. Numbers of people such as this, I saw it equated to St. Patrick’s Day in the media this morning.  That takes thousands of guards and thousands of local authority staff to manage one day a year.

CB: So you’re saying  that can’t be done right across the summer and yet government are telling us it has to be an outdoor summer. And the people who were there  over the weekend were doing,  you could argue, were doing what government told them to do. They weren’t at house parties. They were doors, which is the message that they were given.

CO’R: No they definitely weren’t doing what government told them to do because government are telling us not to gather in groups of that size.  I think the counterpoint Claire would be that there’s hundreds of thousands of citizens of this city who engaged in hundreds of public spaces throughout over the weekend with no issues whatsoever. They followed the public health guidelines. They took their waste with them or they they put it in the bin. They planned where they went and they used the facilities and the toilets where they work and was no issues at all. And this was one location where issues came up.

CO’R: I was talking to somebody this morning whose daughter had gone into Stephen’s Green and who left Stephen’s Green yesterday afternoon because it was too packed. So there is an amount of social and personal responsibility that people have to take on board and people who are 25 are adults so they do have to look at the situation they’re in themselves and make their own decisions around that and we would encourage them to make better decisions.

CB:  Can you see that situation being repeated again next weekend over the bank holiday?

CO’R: No, I don’t think so so I think we’ll be able to put measures in place to manage it in conjunction with an Garda Síochána.