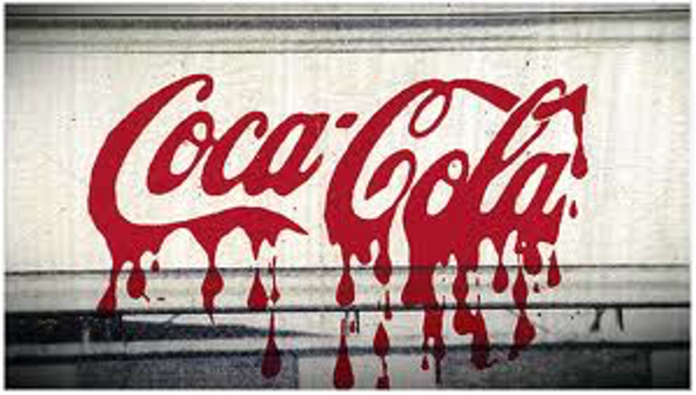 How many reasons are there to not drink Coca-Cola? The number may well push into a quantum dimension.

Fortunately, Ray Rogers of the excellent Killer Coke campaign has been kind enough to provide a less unwieldy overview:

“Deadly violence against union leaders and family members especially in Colombia and Guatemala; labour and human rights abuses also in Mexico, Philippines, Haiti, Indonesia, India, USA,” says Rogers. “In Ireland, Coca-Cola closed two of its directly owned concentrate plants, both of which were strongly unionised, and shifted production to the remaining plant in Ballina, where it refuses to engage in collective bargaining with the union.”

Rogers, the Massachusetts-born son of a union machinist and an electronics assembler, is a veteran activist who has worked on behalf of impoverished people in Appalachia and alongside reformers in the United Mine Workers Union. Rogers helped organise against Campbell Soup on behalf of the Farm Organising Committee, and was instrumental in the boycott in Alabama that led to the historic Amalgamated Clothing Workers of America victory for 3,000 Chicanos against Texas-based Farah Manufacturing Co.

For two decades, Rogers has campaigned against Coke, a corporation which was complicit in several 1990-2002 killings at its bottling plants in Colombia, to name but one of their covert operations.

“My organisation created The Campaign to Stop Killer Coke primarily because of deadly human rights abuses against union leaders and family members in Colombia involving the labour union Sinaltrainal ,” says Rogers. “From there it’s been a long journey.”

A headlining quote from Sinaltrainal VP Juan Carlos Gavis confirms the importance of the campaign:  “If we lose this fight against Coke, first we will lose our union, next we will lose our jobs, and then we will all lose our lives; if it weren’t for international solidarity, we would have been eliminated long ago. That is the truth.”

The Killer Coke website describes itself as ‘A Never-ending Story of Exploitation, Greed, Lies, Cover-ups and Complicity in Kidnapping, Torture, Murder and other Gross Human Rights Abuses’, and offers a disturbing wealth of material documenting Coca-Cola’s abuses.

“The world of Coca-Cola is a world full of lies, deception, immorality, corruption and widespread labour, human rights and environmental abuses,” says Rogers. “It’s also a company that aggressively markets to millions of children unhealthy chemical and sugar laden sodas that fuel the childhood obesity, high blood pressure and diabetes epidemics. Babies and children also suffer debilitating tooth and gum decay particularly in poorer communities where Coke replaces water. In its sugar supply chain, the Coca-Cola Company’s sugar processors have a long history of using illegal child labour in the dangerous harvesting of sugarcane. In essence TCCC has inflicted great hardship and despair upon people and communities throughout the world.”

There is further evidence of Coca-Cola wrongdoing from India and Mexico and Guatemala. It is difficult to keep track of the company’s global malpractices and difficult to comprehend the scale, which extends to tax evasion, whitewashing, and historical links with the Nazis. The stories are horrendous. Alberto Vicente Chavez in Guatemala recounts the murder of his nephew and the gang-rape of his teenage daughter. And the stories are not new. Prompted by abuses of the corporation’s black workers, in Martin Luther King’s final speech in Memphis, Tennessee, he asked the crowd to: “… go out and tell your neighbours not to buy Coca-Cola.” There are, additionally, as Rogers notes “…many deadly accidents associated with Coke on the job.”