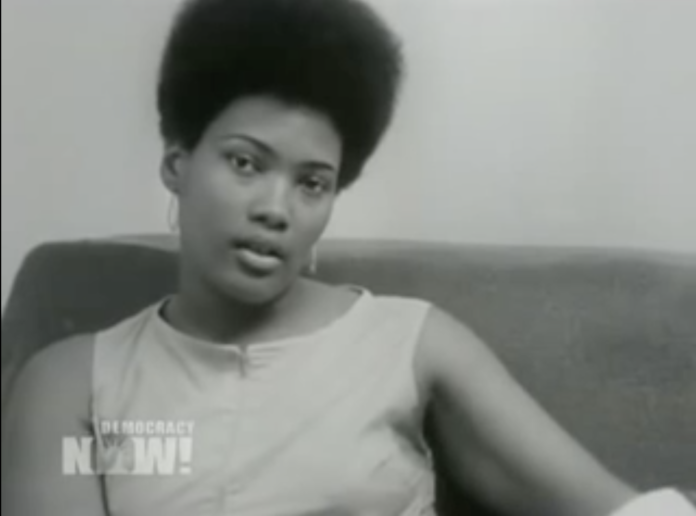 Deborah Johnson was 19-years-old and eight-and-a-half months pregnant on the night of  December 4, 1969, when police burst into the bedroom she shared with her fiancée Fred Hampton, as part of a raid of the Illinois Chapter of the Black Panther Party.

“They just stormed the entranceway to the rear bedroom and they were shooting,” she told the Chicago Reader in 1998. “It seemed like forever. I understand it only lasted ten minutes. They were shooting into the mattress. The plaster was flying off and the mattress was vibrating and then the person that had come in to wake Fred up kept saying, ‘Stop shooting! Stop shooting! We got a pregnant sister here.’ And they eventually stopped and I came out of the room. I had Fred’s robe on and some white long johns and I crossed over out of the bed and put Fred’s house shoes on and came out and walked between two lines of pigs and one of them grabbed my robe and said, ‘Aww, what do you know? We have a broad here.’ I was real pregnant and they grabbed me by the hair and slung me into the kitchen area and as I stood in there, I remember someone saying that Fred was barely alive or he might not make it and then they started shooting again and then it stopped. Someone said, ‘He’s good and dead now.’ I knew they had killed Fred at this point. I remember they took me to Wentworth and then to 11th and State, handcuffed behind my back with this open robe and all of this snow falling outside, and a pig put a revolver to my stomach. He said, ‘You better not try to escape.'”

Fred Hampton and fellow Panther Mark Clark were both killed in the raid. Hampton was 21-years-old. On December 29, less than a month later, Fred Hampton Jr. was born.

Akua Njeri, as she is now known, is a lifelong activist who marched with Martin Luther King Jr and protested against slumlords in her early teens. As a Panther, she became involved with police oversight, free breakfasts for school children, free medical care, and many other Party initiatives. She describes her late partner as a man with a great sense of humour who “could not dance.”

At a recent press event celebrating the release of Judas and the Black Messiah, Njeri discussed the importance of women within the ranks of the Black Panther Party and how she found herself working within the movement and towards the Party’s famous ten-point programme, a manifesto that demanded “full employment” and an end to “the robbery by capitalists”.

“What drew me to the Black Panther Party was I had heard about them, the Black Panthers taking over classrooms and organising around a ten point platform programme,” said Njeri. “We wanted education that teaches us our true history and our role in present day society. So I said wow, this is something. Because they were taking over classrooms. So somebody gave me a flyer with a picture of a panther on it. They seem to be walking across the page. So I  thought: I got to check them out, you know. And then one day, I come home from school and work. And I saw this nighttime talk show, Ronnie Barrett show. And Chairman Fred was on there, and Iris and her husband, they were on there. And I sat there mesmerised, you know, as Fred ran down the ten point platform they were doing in their community. And I was just speechless. So this was an hour long TV show. And after commercials, they come back and Chairman Fred is still talking.

“And he’s said I still got things to tell my people about the Black Panther Party. We feed over 3,000 children a week in churches, community centres, anywhere there’s space. And this is the absence of any public schools having any free breakfast programme. The Black Panther Party initiated a programme that was mandated across every branch by Minister Huey Newton, and Chairman Bobby Seale, the founders of the Black Panther Party. And so these programmes were set up all over the city. So I was like, man, he took over the TV show. So I was really impressed. So that kind of drew me to them. And then Fred and the Panthers came up to my City College to speak. And that was the first time I seen them live and in person.”

Over the years, Njeri has served as the president of the National People’s Democratic Uhuru Movement — which is dedicated to self-determination for Black Americans — and as the chairperson of the December 4th Committee — which fights to defend the legacy of the Black Panther Party and to preserve the childhood home where Chairman Fred grew up.

The 50th anniversary of the Black Panther Party in 2016 marked a resurgence of interest in women rank and file members, and such notable contributors as Kathleen Cleaver, Ericka Huggins, Charlotte Hill O’Neal, and Judy Juanita.

“A lot of times, movements are put in place to take the place of the white man,” says Njeri. “But the Black Panther Party was uplifting the whole family. Fighting for the children, the mamas, the daddies, the babies. The leading factor was the work.”

Judas and the Black Messiah is available for digital download.