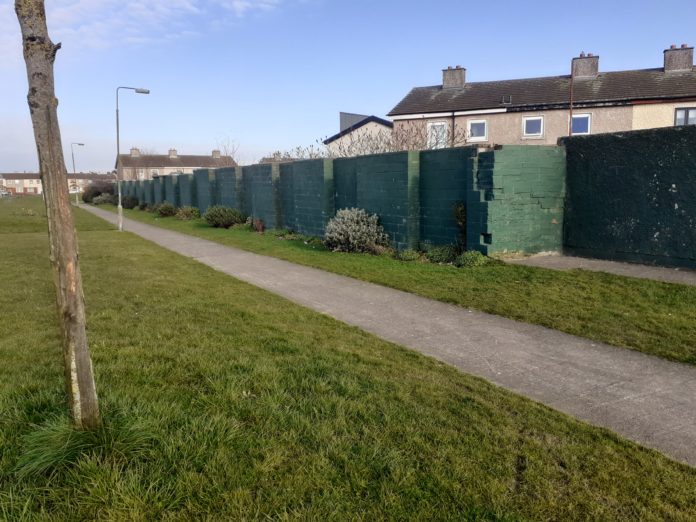 In the brief period of summer we had in 2020, some residents of a south west Dublin housing estate did some digging. A stretch of wall near their houses was attracting fly-tippers. Bags of rubbish and mattresses would be left at the weekends and at night, made worse by people doing lockdown renovations. “This makes it horrible looking”, says Cliodhna, “and the kids cannot use the wall for football and other games”.

Getting outdoors was a central part of helping people to get through lockdowns but anyone living in Dublin’s suburbs knows the routine: someone fly-tips, others get brave and start dumping their own rubbish there. Bags and mattresses and electrical goods build up and then the pile starts getting scattered by urban foxes and dogs.

Cliodhna and her neighbours were tired of this routine and decided to do something about it. They organised themselves to clear the rubbish and place some flowers and shrubs along the wall instead. After all, flowers are nicer than bags of rubbish, right? Not only this, suburban activity like this builds community. People see someone doing something positive and maybe they join in or volunteer time and materials. What happens next though? What about something more enduring? A residents’ association for example?

Many of Dublin’s neighbourhoods, particularly those scarred by historical and structural poverty, have strong community bonds. Community development projects (often started by women) are vital parts of these bonds, helping to coalesce community action around specific programmes. Sometimes they get funded by Councils or the state. So how does the work and motivation of people like Cliodhna and her neighbours connect with these projects?

In places like Fettercairn, Darndale and Finglas, where strong community development action has been a feature of their existence as housing estates that were placed there in the 1970s, small community actions like this get supported but when they want to become formalised, get frustrated by an insistent bureaucracy.

One man in Fettercairn, with a long number of years experience of this, told me that very often the projects people want do not meet with a Council’s aims. “They want to stay in their own comfort zones, so they keep funding the same things, usually sports clubs,” he says. There are forms to be completed and action plans to be conformed with but small community initiatives often do not have this capacity. Council staff, says this man, want to ensure that the Council itself is indemnified before anything else is done. This takes time and effort, both of which small community groups do not have a lot of.

There is also, as Cliodhna will attest to, a real institutional defensiveness. There is a sense that new ideas are not always welcome but instead must fit into current plans. In this context, forming a residents’ association would be a daunting and perhaps unnecessary task: you have to be recognised and organised and this process can take years. The dynamic of people’s own desire to get things done cannot be accommodated.

Residents’ associations (RAs) in Ireland have strong roots. They get formed when people want to make their area better or advocate for their own interests. They’re also a powerful political tool in community and urban planning. They often reflect the interests of their residents: just ask Strand Road residents in Dublin 4. They do not want a one way car route to accommodate a new cycle track so they are going to the High Court. This is largely because they have money and access to power to do this. Most residents’ associations do not have these resources. Most of them gather people to improve their environment, organise litter drives and hold the odd meeting. As a member of a political party myself, I know well how difficult it can be to get people to gather around something new. If they do well, RAs can last a few AGMs. Right now we are in the middle of devising new City and County Development Plans: Residents’ Associations will play a significant role in this.

In some work done by UCD researchers published in 2012, RAs were found to be a vital component of community and political activity but, in Dublin at least, can have very different outcomes. In areas of high development and growth, RAs tend to do much more active interventions around planning applications. In relatively stable and longer-established areas, RAs have a tendency to focus on smaller environmental improvements and building strong community ties. Common to both though is a desire to want to act collectively to both defend and manage their own areas against bad development plans and unwanted growth. This is often framed as NIMBY-ism in the mass media but in actual fact remains a vital channel of political activity along class lines. For the community worker in Fettercairn, he says the left wing parties should be working together on this kind of work, “otherwise you might as well keep voting Fianna Fail!”

While not often recognised formally, working class neighbourhoods have more power collectively than through individual struggle. Politically, left wing activists need to recognise this role played by RAs. This form of political activity is an end in itself, not merely a means to some other abstract political goal.