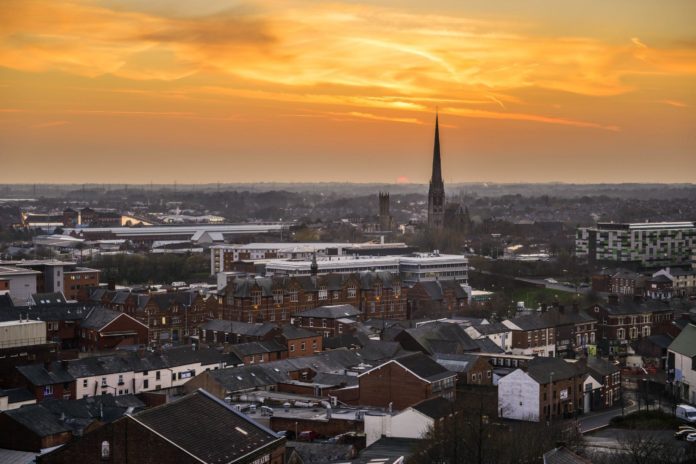 Every year since 2012 Demos and PwC have published their Good Growth for Cities Index.

The Good Growth Index tries to look beyond GDP and covers 10 factors that the UK public considers most important to their economic well being. These include health, jobs, housing, and income, as well as social and economic factors such as environment, transport, and wealth distribution.

When this year’s report was published, the city of Preston found that it had – for the second time – been named the highest performing city in the north-west of England, and that it ranked 16th overall out of 42 cities.

The possibility of such accolades might have seemed far fetched back in 2011, when – in the midst of the financial crisis and government cuts – the planned £700m Tithebarn regeneration scheme for the city centre collapsed.

But instead of giving up or relying on the largesse of yet more private developers, the council decided to try something different.

With the help of the Centre for Local Economic Strategies (CLES) they came up with a series of reforms which would redirect spending towards the local economy.

The ‘Preston Model’ is the term used to describe how the local council – and other ‘anchor’ institutions – has applied the principles of Community Wealth Building. While it involves numerous policies from procurement to co-operatives, at its heart the Preston Model is about developing a more democratic and sustainable local economy.

But, having been there from the beginning, City Council leader Matthew Brown (Labour) is keen to emphasise that the ‘Preston Model’ didn’t appear overnight.

“It’s piecemeal. It’s incremental,’ he cautions. “It’s very radical but it’s certain things happening in certain places, not all at once. And it’s not just the Council, even though we are the lead in terms of the policies for it.”

What would become the Preston Model started with the campaign to get the council and other city employers accredited with the Living Wage. Then, a credit union was established, which now has over 850 members.

“But crucially, the biggest part of it was the procurement,” says Brown.

“Our employment rates really skyrocketed from around 66% about 4 years ago to 80% now. And the Model Based Unemployment Rate shows us now lower than both the north-west and the UK and that’s very significant because traditionally Lancashire has been really beaten up. It’s had deindustrialisation and poverty,” says Brown.

And they aren’t just any jobs; an additional 4,000 employees in Preston were receiving the Real Living Wage by 2018.

“The fact that we’re seeing these improvements is good and I’d say a good part of that is down to the Preston Model. We kind of freed ourselves from this extractive form of capitalist development and we’re actually working in collaboration with our institutions. We’re trying to get a strategic local state, where we [control] where we spend, who we employ, and try to get social value outcomes as well.”

One place where the collaboration between the council and other institutions can be seen is in the provision of basic necessities.

“We established what’s known as Holiday Markets about three years ago so that during holiday time when families couldn’t access Free School Meals you can come along. We work with charities and social enterprises that give us food, mainly surplus food – perfectly healthy but it would have gone to landfill – and we set these up. You can come along and you can give nothing or you can give £1 or give 10p and you can take £30, £40 worth of stuff.

“Despite these dreadful Free School Meals where you get £5 worth of stuff for £30, there’s still demand for that service. So we’re having to plug the gap in many ways.”

“It’s still challenging. It’s not that everything is perfect here; it’s not. We’ve still got lots of challenges in terms of deprivation and other things. But I just think we’re weathering the storm a lot better because of [the Preston Model].”

The Preston Model hasn’t been without its critics, of course. But Brown is well-prepared for them.

“There’s some quite lazy arguments from the right of the political spectrum that this is some sort of protectionism. It’s not. There’s an evidence base that if you spend £1 with a locally-based company or co-operative you find that 63p stays in the local economy. But with a large business or corporation it’s 40p.

“So it’s not about ‘localism’ per say. It’s really about the plurality of ownership of the local economy.”

Were other members of the council supportive when he started spouting on about cooperative models from Mondragon, Emilia-Romagna, and Cleveland?

“There wasn’t much resistance initially. It was really more about ‘can these ideas work?’”

Brown admits that they were “quite lucky”, name-checking both the vital help CLES provided in changing documentation and culture while following proper protocols and a number of “very progressive-minded” council officials who were open to experimentation.

“It’s not like at a lot of councils where you have people who want to find a way of putting the brakes on anything that’s a bit outside the box. But saying that it’s not like it’s been easy really. It does take convincing because people aren’t used to hearing policies like this.”

This outside the box thinking didn’t stop at procurement policy. The Lancashire Pension Fund was supported to invest £100m in Preston and another £100m in the rest of Lancashire, delivering a housing development in the city centre. There are plans for a regional co-operative bank.

Inspired by the Mondragon Co-operative group in the Basque Country, the Preston Co-operative Development Network was established in 2017 as a network organisation of co-ops. Not long before the pandemic hit it was announced that 10 new worker co-ops would receive seed funding from the Open Society Foundation and assistance from the University of Central Lancashire. There’s also plans for a co-operative education centre for the city.

“If you want to move beyond capitalism at a local and regional level, or try to do that as much as you can within this current neoliberal model, you really need to have that infrastructure and community support as well and explain the ideas too. It’s like what Gramsci said, isn’t it? It the hegemony.”

And after years of building up that infrastructure and community support, Preston is ready to move to the next level.

“What’s fantastic now is that we are really moving with the more radical stuff which we wanted to do when we started this,” says Brown. “We’re starting the more exciting stuff around democratising the economy.”

He lists off plans for community / municipal energy, employee ownership, a community land trust, and recruitment.

The Preston Model is only just beginning.