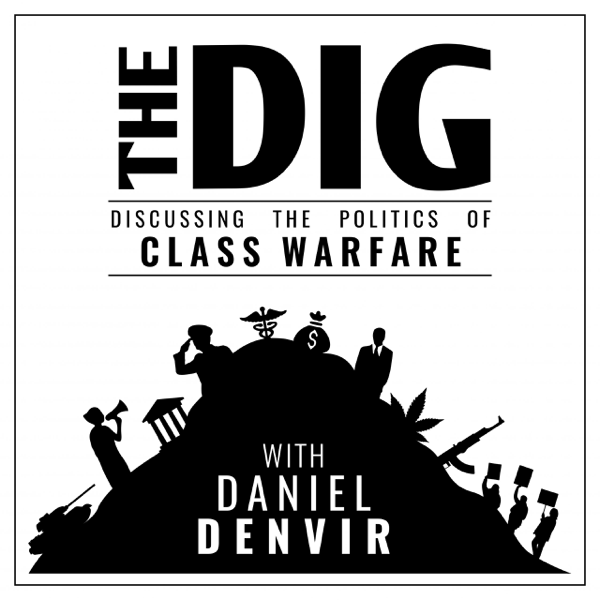 There are a only a few podcasts I listen to all the way through. With some podcast series, boredom can set in really quickly once you realise that this one is just two men (it’s always men) banging on about what they think to be important. Or maybe you have sat through too many podcasts wherein the presenters just love being in each other’s company, a love that doesn’t translate to listeners in any way (looking at you TrashFuture). The Dig is neither of these types. Nor is it always easily digestible because this is a long form podcast, insofar as such a thing can exist. The Dig is, and here regular listeners will know why I am inserting a long subclause in this sentence, a Jacobin magazine podcast on political economy, history, race. And it is often quite brilliant.

Now Jacobin magazine is not always the place I go to to catch up on left wing news and analysis. It can often seem like the articles are getting in too deep into an issue, without grounding itself in actual class struggle. They often seem to push the theory too far, too fast. This leaves me, in most cases, wanting examples, needing more detail and a grounding in specific events and places. The Dig podcast does this in a format that is a lot more engaging than your average Jacobin article. I never feel the need to listen to any episode in one go (although my current circumstances allow this) but often break it up into sections of about 30 minutes. In these long form episodes, Daniel Denvir brings authors and activists on to talk about a new book or article they have written and to describe how the ideas they write about are grounded in praxis. I sometimes listen again to a particular section because it contains a great idea that is also a jumping off point for further reading. This is really useful for someone like me who does not always have the patience to go through the original book.

Denvir (often humorously) goes deep into the guest’s ideas and traces the origin of these in left wing and eco-socialist struggles. Occasionally, there’s a whole episode on a European idea or political movement which gives me a set of wider connections between stuff that I know and stuff that I have heard of but have not previously linked together. A recent episode (Family Values) helped me to join up seemingly distant dots about the beginnings of the alliance between conservatism in the US and the placing The Family at the heart of social policy. Shortly before that I had watched the Fox TV series “Mrs America” wherein Phyllis Schlafly played a central role in both the series and the podcast. How and why did a powerful group of northern state suburban homemakers form an alliance with evangelical southern state gun advocates? This podcast takes us through the finer points of that history in a way a TV show cannot.

The Dig is, in short, a way to spend a long time with a particular subject, be that the development of neoliberalism in western Europe, the politics of the NAACP or the origins of the US carceral state. At the end I often feel like I have been taken on a grand tour of an idea. In this phase of the repeated lockdowns we are currently experiencing, that seems like a good idea.

Name: The Dig: discussing the politics of class warfare

If you only listen to one episode: How Left Parties Neoliberalized with Stephanie Mudge