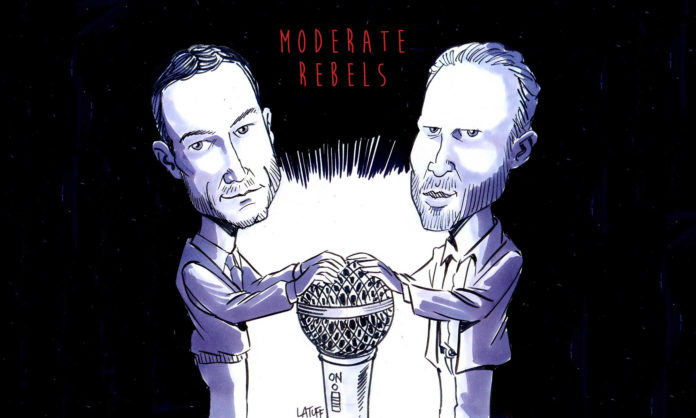 “I’ll never apologise for the United States of America… Ever! I don’t care what the facts are.”

The immortal words of G. Herbert Walker Bush bellowed out before the fastest flurry of jazzy sax notes since Coltrane’s Giant Steps.

You’re listening to Moderate Rebels, as one excitable co-host might put it.

While it is difficult to summarise the show it may be oversimplified as anti-Jacobin.

Co-hosts Ben Norton & Max Blumenthal manage to provide listeners with information on just about every geopolitical aspect of the US empire but to say it was a left wing podcast would miss the point of the show.

The podcast fills a niche felt throughout the English speaking world: a support for existing anti-imperial projects, not just speculation on future niceties.

This is most certainly a socialist podcast and not a gaff for radical liberals upset about university fees.

It’s a welcome trumpet blast. Alternative media has been in dire straits for many years. Five years ago, one could find multiple sources and platforms of varying notoriety that espoused left wing views. The crunch on dissenting opinion and the left, however, has been hard felt in the last few years, particularly where anti-imperialist views are concerned.

As the media has changed so too has the broad consensus.

The antiwar movement has dwindled over the last two decades. Bourgeois media has adapted. Having failed to garner any significant public support outside of the US for the Iraq war, they’ve learned how to deceive again.

The Obama regime inflicted horrific atrocities against the governments of Libya and Syria. However, there was little resistance to war on these occasions, especially from leftist media. Many who opposed the Iraq war embarrassed themselves with calls to support “moderate rebels” in Libya and Syria against the governments and extremists like Daesh (ISIS).

Moderate Rebels is a stalwart opponent of these distortions. They might coyly be called fact-checkers.

While it may be contentious to say so, the show began roughly around the beginning of the new Cold War, a dawning conflict between the US and China & Russia.

The show covers a variety of issues.

There are highly topical episodes covering events that are relevant that week e.g. Iran escalations, the extradition trial of Assange, and Ecuador election meddling.

Occasional historical episodes have touched on issues such as the erasure from history of the Soviet Union victory in WWII.

Norton and Blumenthal both have considerable expertise and astute analysis on matters of geopolitics.

The pair never miss an opportunity to hit back at the cruise-missile left.

It’s easy to expose the lies of the NYT or the Post but Jacobin usually gets off the hook.

According to Blumenthal, “Jacobin published a call to arm moderate rebels [the show’s namesake] with surface to air missiles”.

There is scarcely a regime change call that Jacobin doesn’t back and the magazine has viciously criticised the governments of Venezuela, Nicaragua, and Cuba for their lack of socialist credentials.

What makes the show particularly enjoyable is the banter between Norton and Blumenthal.

Moderate rebels is the only place you might hear the often stern Blumenthal crack a laugh.

There is a great deal of wit on the show. This is a much appreciated antidote to humourless leftists, whose only enjoyment comes from blue-tick approved “jokes”.

Release: It varies but roughly fortnightly

If you only listen to one episode: How the US makes countries pays for it’s wars: Economics of US imperialism