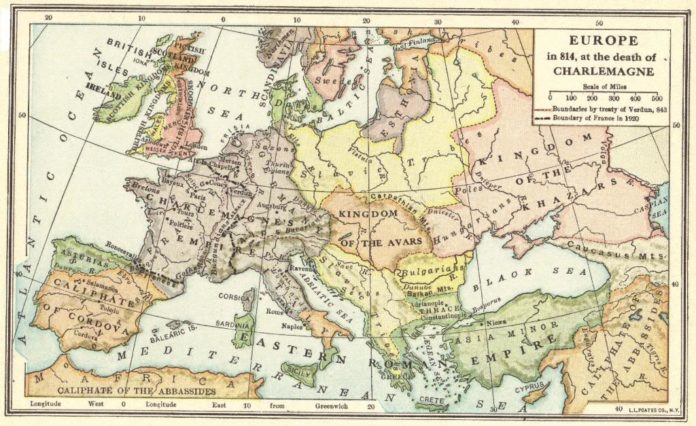 Europe is a continent that spans from the Mediterranean sea and Balkan states all the way up to Scandinavia where it enters the Arctic circle. It includes Ireland, Iceland, and the British isles and continues deep into Siberia where it connects with Asia. It is rich in history and cultural diversity. Throughout recent centuries, the borders within Europe have waxed and waned as a result of wars between its rival empires. New borders were drawn as countries won their national independence, particularly after the collapse of the Soviet Union. As historian Norman Davies explains, the concept of Europe replaced the concept of Christendom in a complex process that played out between the 14th and 18th centuries.

Although generally seen as a development originating in the twentieth century, the idea of a united Europe is actually almost as old as the concept of Europe itself. Quaker leader and founder of Pennsylvania, William Penn is often thought to be the first to propose a European parliament. Following the religious wars of the 15th, 16th and 17th centuries, the French dissident abbot, Charles Castel de St Pierre later advocated for a European confederation as a way to ensure peace.

But the idea of a European commonality has been a force for both progressives and reactionaries. In the wake of the French Revolution, counterrevolutionary forces allied themselves in the name of European civilisation. Imperialism was often justified by Europe’s moral superiority. And as the Red Army began to advance on the Third Reich, Hitler made the claim that he was protecting Europe from the “Slavs”.

In the aftermath of the Second World War in Europe, a conflict that destroyed millions of homes and caused huge loss of life,  European unity was prioritised. Thus the European Coal and Steel Community (ECSC) was founded with this cherished goal of peace, harmony and prosperity.

Over the following decades, the ECSC expanded from 6 members to 28 member states and evolved into the full customs union we have today with a common travel area, parliament and even a single currency.

Although questions can be asked about the role it has played in countries such as Yugoslavia, Ukraine or Libya, it is obvious that the European Union has achieved its goal of peace between its member states. Perhaps for the first time in centuries, at a superficial glance, none of the countries involved has come close to war. However, when we look at the wealth created in Europe over the last few decades, we run into problems.

For several decades, western citizens have enjoyed an era of social democracy and prosperity. Countries implemented welfare regimes and employment was high. But this came to an end in the 1970s. This is the point when neoliberalism took hold.

After the collapse of the Soviet Union, the EU expanded and European integration began to accelerate at an unprecedented rate with the signing of the Maastricht treaty in 1992, the Treaty of Amsterdam in 1997, and finally the Lisbon Treaty in 2007. Europe was essentially catapulted into a common market ensuring the unrestricted free movement of goods and capital across the continent.

The free movement of capital that ensured has enabled businesses to move operations to countries with lower working conditions and to undercut local wages. After recently coming into difficulties with their unions, Ryanair, for example, easily managed to move their units to Poland where they could that advantage of fewer employment rights. This is sometimes called “social dumping”. Free trade often means that domestic companies cannot compete with cheaper goods imported from countries with lower wages. The capitalist counterargument is that employers will have to pay their staff less or close down.

Furthermore, this globalisation process has undermined national democracies. During the 1960s and 70s, when social democracy was at its peak in western Europe, the free market was dictated by government policies. Taxes took money from the rich to give to the poor in the form of social welfare. But since the transition to neoliberalism, the opposite is happening. Government policy is now dictated by the markets. Multinational corporations enjoy major tax breaks and government subsidies. Meanwhile, welfare payments have been cut sharply. It is not a coincidence that voting participation has severely declined over the last few decades.

In an increasingly globalised world, a supranational institution such as the EU has the potential to solve many pressing issues. The EU could ensure cohesive action against climate change, for example, and would hold much greater bargaining power against pharmaceutical companies. Instead, the EU has acted to maintain this problematic economic system.

This new stage in European integration should have included democratisation of the European institutions. But that never happened. The European Commission, European Council and European Central Bank do the vast majority of the decision making in Europe but none of these are elected directly by the European people. They are, instead, appointed by various heads of state. The European Court of Justice’s history shows it repeatedly siding with employers against workers, in such rulings as the case of Laval or Viking in 2007.

For all these challenges to democratoc process, European politics receives little to no attention from the media or voters. Most voters could not tell you how their local MEP voted. Because of this, MEPs are not held responsible for their actions in the same way that members of a national parliament might be. Without any apparent democratic process, the institution becomes a slave to the corporate lobbyists.

Given the nature of these institutions, it is clear that the European Union is an adversary of socialist values. The question of how socialists should engage with Europe can, thus, be complicated. Greek economist, Yanis Varoufakis, has advocated for reforming the EU. Following the Syriza affair, most leftists assert that reforming the EU is impossible as the various institutions are capable of undermining any national democracy. Varoufakis has, however, advocated building a socialist movement across the continent  in order to challenge the present system. Although this idea is not entirely impossible, it is highly improbable. Considering how weak the left is in so many countries, it is unlikely that this idea can come to fruition. So far, any efforts in this regard have yet to gain any real traction.

Ultimately, leaving the EU is our only alternative. Euroscepticism is generally seen as a condition of the extreme right. The left, fearful of being conflated with the likes of Nigel Farage or Justin Barrett, is too often hesitant in addressing this issue. If socialists were to pivot the debate about the EU, diverting the issue from nationalist and racial issues and towards questions of state funding, fiscal policy and trade unions, the growing distrust of the European project could be a force for the left rather than the right.