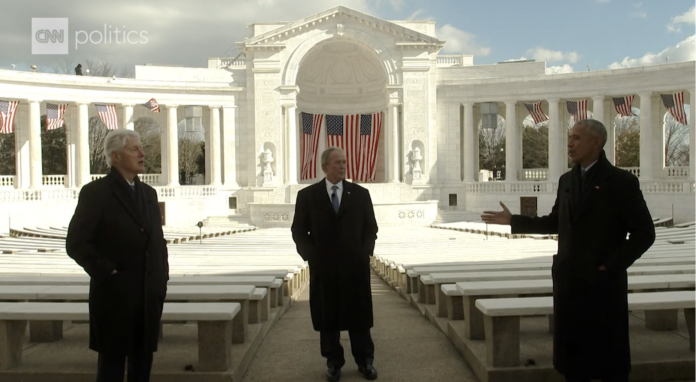 Right at the end of the US presidential inauguration, there was a moment when Obama, Clinton and Bush the Younger were filmed in Arlington cemetery. The talk was of “healing” and “unity” and an attempt to heal the “wounds” that had been caused by the unnameable ‘last four years’. It might seem like an odd moment (because it was) for the end of an inauguration. After all, these three men headed up different US governments over a 12 year period. Obama is not Clinton is not Bush. They are US presidents who in their own way waged war on the American working class and on people in Iraq, Somalia, Serbia, Afghanistan and many other places. What would they know about unity? So how do we make sense of this? What do endless calls for unity and healing mean in this context?

It is fortunate that at the end of another awful cycle of US elections we have people who can help us make sense of it. Citations Needed is a US-based podcast hosted by Nima Shirazi and Adam Johnson, and is backed by a team of researchers and producers. Their podcast looks at the intersection of media, PR, power “and the history of bullshit”. Basically, they take a bunch of regular media representations of the daily events around us and look at it from the perspective of where power lies.

When the police kill African-Americans on US streets, we know it is not a random occurrence. It has terrible consequences for the family and comrades of that murdered person. But Citations Needed looks at how the media examine police brutality and murder: how police are excused, how victims are spoken about, how their lives are reduced to a few soundbites and individualised. They not only note that police murder people, but that those muders occur because of a specific set of circumstances.

When it comes to calls for unity after the end of the Trump administration, this is a way for media organisations to avoid talking about all of the contradictions that really do exist in people’s lives: the poverty, racism and exploitation. It is not that we do not want unity and peace but whose peace and on what terms? Citations Needed gives us the tools to help us understand media portrayals of all of these things. The format for each episode is to take some time to introduce us to the episode’s theme (a take down of the bullshit that we all listen to, even here in Ireland) and then bring on a guest. Guests might be an author, a representative of a local justice group or a union activist to talk about how their own work reflects back on that theme.

We badly need more media criticism in Ireland too. Lots of us are on social media and see the perspectives of others. Ireland has a few decent podcast series. New perspectives can be useful but we do not often get a good overview of how the pieces fit together, particularly in a world where the pieces are not always easy to fit together. Citations Needed is a good way to come to terms with the endless cycle of ‘things in the media’, to move beyond them, and to identify the major ideas that underpin reportage. These major ideas govern the way we all live our lives; understanding them allows us to identify how we can change them.

Release: Every week to ten days

If you only listen to one episode: How the Right shaped pop country music