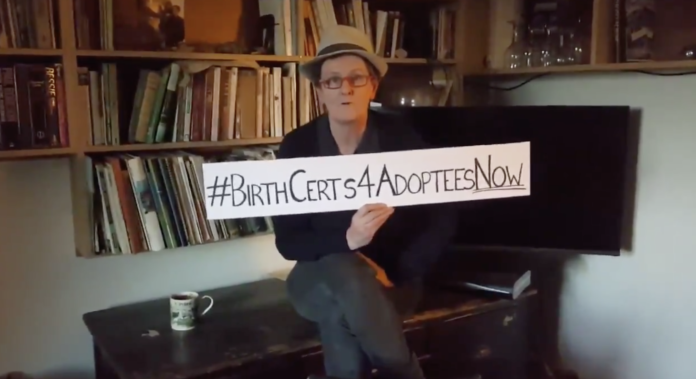 Over 23,500 people have signed a petition calling for adoptees to be given immediate access to their birth certificates.

The petition, which was started by activist Izzy Kamikaze on 13 January, looks for a “simple, single paragraph amendment to the Civil Registration Act [to be] passed IMMEDIATELY to give adopted people the right to access their birth certificates.”

The petition comes in the wake of the publication of the Final Report of the Commission of Investigation into Mother and Baby Homes last Tuesday.

According to the report, 56,000 mothers and 57,000 children were incarcerated in the Mother and Baby Homes and county homes that were part of the investigation. 11% of the mothers were children under the age of 18.

The report also found that 9,000 children died in the institutions.

At present, adopted people have no rights to access their original birth certificate or information on their birth family.

While the Commission recommended that access should be allowed and the Government has stated that it will bring forward legislation, concerns remain over how quickly this will take place.

“The long-awaited report of the Commission of Enquiry into Mother and Baby Homes was published yesterday and was met with general disappointment by survivors, who felt that it had failed to address any of their practical concerns,” said Kamikaze on Twitter.

“So, I think this is a time for people power. It’s time for us to put pressure on the government to deliver something practical for survivors.”

One of the petition’s signatories commented simply that “I don’t have my original birth cert and I don’t know my true identity”.

Separately, another petition started after the publication of the report is calling for the Angelus to be taken off RTÉ.

It is expected that further calls for action will be made as survivors and their supporters have time to access and review the full 3,000 page report.