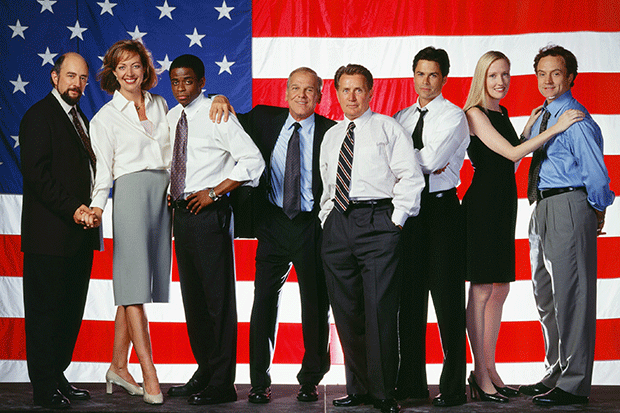 A few days before the recent US election, the New York Times ran a piece by “contributing opinion writer” Margaret Renkl.

Ms Renkl does go on to offer a few qualifications in her support for that sentimental, hedge-sitting, classist, smug, dishonest TV series, but, on balance, she stands by the words on her preferred ceramic. Those characters offer an ideal of American leadership for a great many people. Running from 1999 until 2006, the series followed the adventures of Josiah Bartlett, a near-Angelic centrist President, as he tried to bend the world to his white-bread will. The West Wing is dismissive of middle-America. It writes women as bumbling klutzes (yes, even the much-loved press secretary CJ Cregg). It presents environmentalists as cranks. Yet its fans remain legion. Many regard dissent as evidence of lunacy.

Thanks heavens for The West Wing Thing. A fair share of the Podcast Universe is taken up with projects celebrating TV shows. The hugely popular Gilmore Guys offers a charming deconstruction of Gilmore Girls (a contemporary of The West Wing that, because it was about “gurls stuff”, never got comparable levels of acclaim). Seincast does good work on Seinfeld. This writer is an addict of the amusingly idiosyncratic, unexpectedly Scottish Columbo Podcast.

The West Wing Thing is different. No other podcast has spent so much time explaining why we should despise a cultural entity. Josh Olson, a top-drawer screenwriter who received an Oscar nomination for A History of Violence, and Dave Anthony, a busy comedian, actor and screenwriter, take no prisoners in their assault on the sacred blabfest. Inevitably, much of the ire is directed towards all-powerful creator Aaron Sorkin. To the team, that writer — whose terrible Trial of the Chicago 7 landed recently on Netflix — is not just a centrist, he is a genuine conservative. As the series moves on, their opinion of Sorkin does not improve. There are occasional acknowledgments of his technical gifts, but he is to The West Wing Thing as Sauron was to The Lord of the Rings. “We thought at first that we were going to be bagging on the politics while acknowledging that these are great actors and Sorkin’s a great writer,” Olson said in a recent interview. “And I would say where we are now is: ‘These are great actors.’”

Early on they grudgingly admit that they were once fans of the show. “It was like Star Trek,” they explain. The moment of anti-WW radicalisation came when they realised much of the country hadn’t grasped that this Happy Clappy administration was an unachievable (and perhaps undesirable) fantasy. “I am a big fan of The Next Generation,” Josh says in the first episode, recalling a conversation about The West Wing. “I was sitting in a room with a bunch of friends and it was like they actually believed the United States was in the Federation of Planets and we had space vessels out there.” Others have described The West Wing as Little White House on the Prairie.

Beginning in the last days of the Clinton administration and stretching to the middle of George W Bush’s second term, The West Wing always attracted criticism for its politics. It could be easily read as a version of the Clinton White House without the semen-stained dresses and travel office intrigues. A practicing Roman Catholic who tears his hair at every supposed moral compromise, Bartlett was the man liberals wanted Bill Clinton to be. During the show’s initial run, smart aleck right-wing pundits enjoyed characterising the show as “The Left Wing”.

Criticism from the left was more muted, but, following the show’s demise and canonisation, a more vigorous progressive backlash kicked off. Sorkin, who won an Oscar for writing The Social Network, inadvertently fanned the flames in several ill-judged interviews. “I really like the new crop of young people,” he said of freshly elected Democrats in 2019. “They now need to stop acting like young people. It’s time to do that.” Though not named, Alexandria Ocasio-Cortez felt her ears burning. “News Flash: Medicare for All & equal rights aren’t trends,” she tweeted above a video of the interview. “When people complain about low turnout in some demos, it’s not because communities are apathetic, it’s bc they don’t see you fighting for them.” The dispute spurred the West Wing Thing team into greater furies.

In later episodes, they argue that The West Wing’s attitudes — if not the show itself — were instrumental in electing Donald Trump. No cultural entity better showcases the arrogance that coastal elites show to small-town America. The wisest lines are delivered, complete with Latin tags, in the syntax of the Harvard Law Review. Who wouldn’t want to see these smug patricians put in their place?

One might, nonetheless, reasonably wonder if (at time of writing) 41 episodes slagging off a TV show that ended a decade and a half ago might be a few too many. The creators keep it fresh by inviting evolution. Guests such as Ashley Stevens, educator and activist, and Luke Savage, writer and journalist, arrive to offer different flavours of dissent. The current version of The West Thing is as much a political debate as an analysis of Sorkin’s outrages. And it remains hysterically funny. Even the most ardent West Wing enthusiast will surely admit a snigger at Collyn McCoy’s heavy metal theme songs. “Calling all West Heads, we’ve got a job to do,” he bellows in the style of AC/DC. “We got seven seasons of wang and they’re calling for you. Get your TV on and your Netflix workin’. We’re gonna get down with Aaron Sorkin!”

None of which dulls the anger. In a recent episode, Anthony gave out about being told off for not celebrating Joe Biden’s victory with sufficient vigour. “I have been living on this planet for five decades and not once in my entire lifetime have I been represented by someone I voted for,” he nearly yelled. “Not once has a leftist ever been in office representing me. So take your liberal bullshit — you get to elect someone every time! — and go fuck off.”

You don’t get that class of dialogue from Aaron Sorkin.