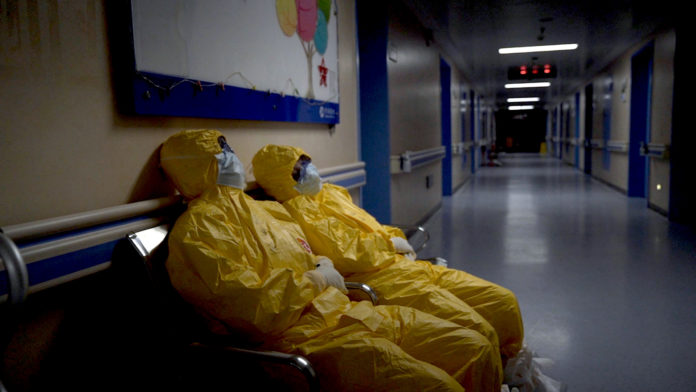 On January 23rd, 2020, China locked down Wuhan, a city of some 11 million citizens, to combat the COVID-19 outbreak. 76 Days, a gripping new documentary, chronicles the frontlines of the epidemic across four Wuhan hospitals.

Hao Wu, one of the film’s co-directors, had flown to Shanghai from New York for Chinese New Year on January 23rd, the same day China imposed a complete lockdown on Wuhan to contain the COVID-19 outbreak. Shanghai is far from Wuhan, but China’s largest city, Hao recalls “…appeared like the film set of a  zombie apocalypse movie.”

“It also became apparent that the situation was dire in Wuhan – people were dying, hospitals were overwhelmed, and  medical personnel did not have adequate protection so they were getting sick and dying too. The country was angry. I was angry. So when a US network approached me to make a feature documentary about the evolving  pandemic, I jumped on. I reached out to filmmakers who were filming on the ground in Wuhan. After speaking to over a dozen, I found my two co-directors whose footage, with unprecedented access to the  frontline, shook me. I was so moved by the stories they were uncovering that I made plans to have myself smuggled into Wuhan to bear witness first-hand.

“Then the pandemic reached New York. I was alone in New York with my camera and the desolate scenes disoriented me. It shocked me even more, this second time around, because America supposedly had a top-notch public health infrastructure and a far-superior political system. Then the geo-political fights began, and the finger pointing between the US and China  reached a fever pitch. Anti-Asian racism reared its ugly head globally. Even in New York, the most diverse American city, I got yelled at walking in the street.”

While Hao initially intended that 76 Days would “get to the bottom of the virus”, the documentary instead stands as tribute to the heroic efforts of frontline medical staff in Wuhan.

“My own feeling towards the pandemic has evolved from a starting point of fear, anger and  wanting to assign blame, to one seeking to understand the universal human conditions in  times of crisis,” says Hao. “As much as I have been horrified by the human toll of this pandemic and the  failures of different societies to mount a cohesive and effective defense, I have also been encouraged by the ample evidence of human tenacity and kindness.”

A report in The Lancet last October outlined the ways in which China had controlled the virus where other countries failed: “Wuhan was placed under a strict lockdown that lasted 76 days. Public transport was suspended. Soon afterwards, similar measures were implemented in every city in Hubei province. Across the country, 14 000 health checkpoints were established at public transport hubs. School re-openings after the winter vacation were delayed and population movements were severely curtailed. Dozens of cities implemented family outdoor restrictions, which typically meant that only one member of each household was permitted to leave the home every couple of days to collect necessary supplies. Within weeks, China had managed to test 9 million people for SARS-CoV-2 in Wuhan.”

A recent statement from the Embassy of the People’s Republic of China in Ireland recounts and praises the coordinated response that has allowed the country to successfully combat the coronavirus:

“During the extraordinarily difficult days when Chinese people addressed the pandemic together, we saw the heroic spirit of marching straight to the frontlines, holding posts with tenacity, taking responsibility, sacrifices with bravery, and touching moments of helping each other.

“With the people’s sincerity and respect for the blessing of life, they fight for every minute and every second, enduring physical and psychological pressure. Many of them had bloodstains on their cheeks and even ulcers from their masks, as well as white hands from sweat for a long time. They are the great wall of steel to stop the virus, saving one dying life after another.

“That is also China’s spirit in combating the COVID-19 epidemic — putting people’s lives first, nationwide solidarity, sacrifice, respecting science and a sense of mission for humanity. With all the efforts of medical personnel and all the Chinese people, China managed to contain the rapid spread of the virus in just over a month. In about two months, the daily increase in domestic coronavirus cases fell to single digits. Meanwhile, a decisive victory was secured in once the hardest-hit Chinese city of Wuhan in just about three months.”

76 Days is available on digital platforms.