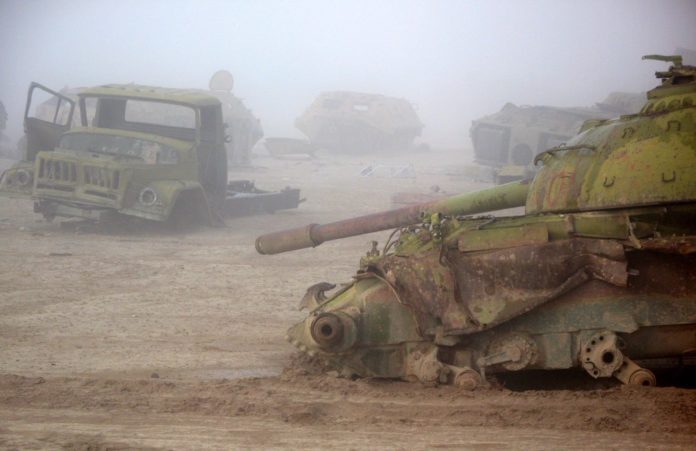 On November 16th, the Times of London reported that Trump’s recent installation of loyalists in top Pentagon jobs is likely to be for the purpose of fulfilling his long-term pledge to bring an end to the U.S.’ “endless wars”. It was expected that Trump would order the withdrawal of 4,500 troops from Afghanistan and so end 19 years of occupation. Instead, in an act of ambiguous stagecraft, he will leave behind a counterterrorism force.

There are two prominent objections to Trump’s original proposal, as he outlined in a tweet in October. Firstly, a swift withdrawal of U.S. forces, that would have to take place before January, will bring logistical chaos. The daily state of chaos which occupation brings to the lives of millions, however, is barely considered by US critics.

Secondly, an ‘early’ withdrawal will disrupt efforts to stabilize Afghanistan. Christopher Miller the current U.S. Acting Defense Secretary recently sent out a memorandum saying, “we are on the verge of defeating Al Qaida and its associates, but we must avoid our past strategic error of failing to see the fight through to the finish.”

A fair point, but if not now then when? Furthermore, who gets to define when a mission is accomplished?

If 19 years of occupation, by the mightiest military force of our modern age, has not led to a suitable conclusion then unlikely will another year make any difference. The fact is the U.S. occupation, of Afghanistan, has been an unmitigated disaster that next to Libya, Syria, and Iraq represents a litany of the greatest human rights violations of the 21st century.

There are now 2.7 million Afghani refugees worldwide while Afghanistan’s GDP per capita stands at a paltry $531. Afghanistan now cultivates over two-thirds of global opium and has 2.4 million opium addicts. Tragically, the US spent $52 billion occupying Afghanistan in 2019, which is more than double Afghanistan’s GDP, at $20.68 billion per annum.

With the devastating suffering which occupation has brought to the Afghani people, and notwithstanding the criticisms of an abrupt exit, Trump’s efforts to bring an end to the occupation of Afghanistan and end US wars are commendable.

By contrast, the mild-mannered, but often hawkish, Biden looks unlikely to take the same line. While he has not always supported military action he nevertheless believes in the US hegemonic right to use hard force. For example, Biden supported the catastrophic 2003 illegal invasion of Iraq and he pushed for NATO’s expansion eastwards.

However, Trump’s actions, in regards to Afghanistan, may be too little too late. Instead of concentrating on ending U.S. global occupation, he has been busily engaged with a self-destructing economic war with China who could have been a useful ally in ending the Afghanistan quagmire. Why then has President Trump been distracted by China at the expense of fulfilling his pledge to “bring home the troops”?

Trump’s problems stem from being able to recognise the unease of working-class America and the problems that arise from both national and transnational capital, i.e. the one-percent, while concurrently staying beholden to the propaganda of the one-percent used to control the ninety-nine percent.

For example, Trump, in contrast to previous presidents, captured the zeitgeist of a large section of traditional working-class Americans who serve in the military. It is they who make needless sacrifices, through their blood and taxes, for the service of an elite who care little for their subaltern. But due to Trump’s billionaire status, and his own willingness to swallow the propaganda fed to the working-man, he has been ideologically crippled.

Firstly, being a billionaire, he has been unable to see that unfettered U.S. capital, both in their national and transnational forms, represents the nucleus of where the US primary contradiction emanates from. On one hand, Trump has supported capital with avaricious tax breaks. On the other hand, the military-industrial-complex, that has resisted Trump, is a business itself that feeds on the suffering of never-ending wars.

Secondly, Trump rightly sees that the American worker has been disempowered due to US transnational capital shifting production to Asia. However, Trump unfortunately falls into the trap of jingoism by predominantly vilifying China for events beyond China’s own control. China then is as much an innocent party as the American working-class who are taught to hate China.

In addition, Trump, when it suits him, is quick to criticise the disseminating of “fake news” by the U.S. mass-media which itself is controlled by transnational capital.

Trump like much of the U.S. working-class has nevertheless been indoctrinated to accept simplistic narratives this mass-media propagates. It is these narratives which justify and distract Americans from their home-grown problems which stem from US class contradictions.

For example, the mass-media’s constant China-bashing, which has long happened before Trump’s arrival, along with their support of U.S. foreign interventions, work hand in hand. Threats are used to justify war at an ideological level to the masses, while the war itself is used to achieve the strategic and economic goals of the one-percent.

In addition, foreign threats and wars work to distract Americans from their own deep-state’s machinations. This in turn drums up a national fanaticism that provides an “emasculated” working-class with a masculinised American identity linked to global supremacy and “righteous wars”. Trump, of course more than any other president, has tapped into this masculinised American “tough man” image.

While the existence of a corporate media, along with corporate interests, negate US democracy and make the country ungovernable for the ordinary citizen, it is these same external influences which form the “embodying features” of Trump: he has been unable to extradite himself from the swamp he promised to drain.

Thus, the quagmire that is US democracy and that is Trump is also the quagmire of Afghanistan today. Regrettably, transnational capital – who Trump terms the globalists (a sinister term with anti-Semitic conotations) – has played Trump well throughout his presidency.

Unless serendipity allows the US to withdraw from Afghanistan in the next two months, Biden, who cannot be accused of being ideologically naïve, will be ready to take over the reins from where Bush and Obama left off; on the never-ending journey to war.