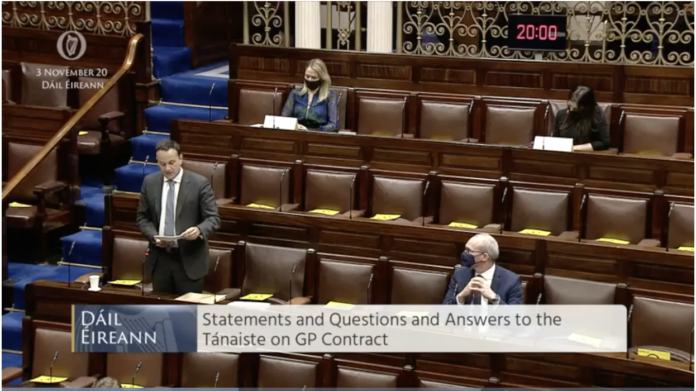 The stressed person’s guide to the week.

In lieu of the annual Betty Sinclair Winter School, Trademark is hosting a series of online events in partnership with the Rosa Luxemburg Foundation focusing on a Just Transition. On Wednesday they’ll host Why Greenwashing Won’t Wash and on Thursday it’s the turn of cooperatives and economic democracy in a Just Transition.

People Before Profit will also be busy hosting their ‘Health Week’. The party launches its All-Ireland Zero Covid Roadmap this evening. Pay Rise for Healthcare Workers is on Wednesday.

On Thursday evening, Ballyroan library is hosting Dr Sinéad McCoole on the role of women in the campaign for Irish independence. If you’re looking for more niche historical topics, the Irish Labour History Society is hosting a talk on Saturday on the Motor Permits Dispute.

Ulster Bank has an 88-strong branch network and 3,000 jobs across the Republic and returned a €500m dividend to NatWest in 2019. With NatWest considering closing down Ulster Bank in the Republic, the Financial Services Union has set up an email my TD system asking them to pledge support to the Save Our Ulster Bank campaign.

Another petition going around is for talks to be immediately convened to resolve the Debenhams dispute and ensure that the workers are paid their redundancy.

We’re not sure if anything will be quite as much fun as watching Pearse Doherty grilling Varadkar last week but Sinn Féin is up for a second round anyway by bringing a motion of no confidence in the Tanaiste on Tuesday.

Also on in the Dáil this week we’ll have the Withdrawal of the UK from the EU (consequential provisions) Bill 2020, the Independent Group’s motion on state aviation policy as it affects regional development, and Sinn Féin’s Regulation of Private Security Firms Bill 2019  going to second stage.

Over in the Seanad they’ll have statements on the Level 5 Covid-19 response, Fianna Fáil’s Seanad Electoral (University Members) (Amendment) Bill 2020, and statements on the recognition of Irish military service at Jadotville in 1961.

It looks like the best chance for TDs and Senators to turn get that perfect video this week will be at committee. Tuesday will see officials from the Department of Housing and An Bord Pleanála speaking about Strategic Housing Developments, officials from the Department of Education explaining that Leaving Cert 2021 certainly won’t look like Leaving Cert 2020, and Minister Roderic O’Gorman in front of the Joint Committee on Children.

On Wednesday Paul Reid will discuss the HSE Winter Plan, Department of Housing officials will discuss climate neutrality, and the OPW will try to get away with discussing the 2019 Appropriation Account without too many people asking about the Phoenix Park. Those interested in language and culture can watch discussions on Údarás na Gaeltachta and the Officials Languages Act or RTÉ, NUJ and the Independent Broadcasters of Ireland on the future of Public Service Broadcasting.

Finally, on Thursday Simon Coveney will discuss matters considered at meetings of the Foreign Affairs Council. What’s the chances he’ll insist on the importance of Ireland’s neutrality while at the same time try to undermine that very concept?