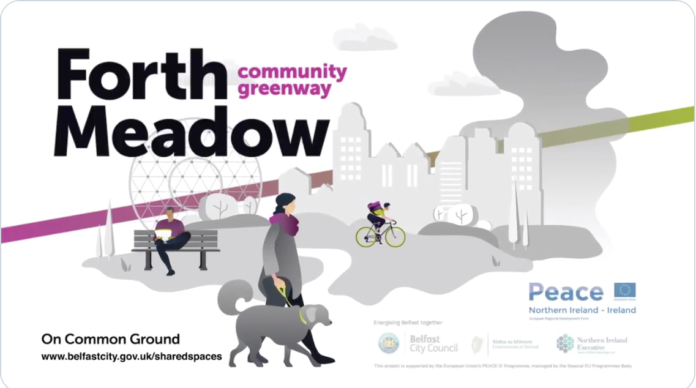 It is well known that west Belfast is an area that is in dire need of social housing. Many local people and families are living in temporary accommodation for long periods of time. The long-awaited development of the land on the former Mackie’s factory in West Belfast always came with the expectation that part of the land, at least, would be set aside for social housing.

However, it appears that the land, which is controlled by the Department of Communities, currently has no plans for the provision of social housing as part of the re-development.

The proposal from the Department of Communities, for the land on the Mackie’s site, shows that it will be used as a greenway. The greenway will include pathways, ponds and green space but what is not included is any provision for social housing. The omission of social housing will leave many families homeless during an already difficult time economically and when it is clear to everyone that the focus should be on providing workers and their families with homes.

Belfast City Council and the Department for Communities proposed the greenway plan as part of its ‘reconnecting to open spaces’ strategy. Within this plan they will work with the Braidwater Group, a Derry based property development company. The proposed map clearly shows land connected to the Mackie site is designated as a ‘Braidwater site’. It is understood that there are plans for some form of housing here. But not what form this housing will take. When questioned by several media outlets, Braidwater refused to comment on the housing development, stating that the planning was still in the early states and that discussion with Belfast City Council and the Department of Communities were ongoing. This complete lack of clarity and transparency suggests the site will not be used for social housing.

It is clear that a new solution to the housing crisis is urgently required. Unfortunately, the current plan for the Mackie’s site has progressed while Stormont was not sitting and there was no minister in post at the Department of Communities. Now a minister is in place, assurances have been given that the plan will be more inclusive.

The activist led organisation ‘Participation and the Practice of Rights’ (PPR), has campaigned heavily for social housing on this site for more than ten years now. They have stressed that this is an ideal opportunity for many, if not all families, on the waiting list and in temporary accommodation to be provided with homes.

As most people will be aware West Belfast has long suffered from severe social and economic inequality. The development of social housing on this site would provide a chance to do something new and something good for the area and the community. However, it is important to remember that housing cannot be developed in isolation. Services and amenities must be made available for workers and their families and in close proximity. This also needs to be fit for purpose. There additionally needs to be an assurance that the proper transport links are in place to ensure workers are connected to the wider community and the city. This site also provides an opportunity to develop a community where workers from different backgrounds could live in a shared environment. Key to all of this is an inclusive approach to the development, a guarantee for social housing, and a commitment to creating a shared environment.

It is worth noting that Belfast City Council recently posted an online survey. This survey gave the public the opportunity to share their thoughts on the Forth Meadow Community Greenway plan. Sadly, it seems that the survey was not well publicised and received only 273 responses. In fact, the survey was only open to the public for one week. Even more concerning was the fact that despite their heavy activity regarding the development, the PPR have stated that they only became aware of the survey on the day it was closing. The PPR had assurances from Belfast City Council that they would be notified. This timing is clearly not in the spirit of openness and accountability.

To date, the planning process for Mackie’s has excluded many families who are in desperate need of housing from the consultation. It is time now for Belfast City Council and the Department of Communities to open up the conversation, to be honest and transparent and to do what is right; to serve the interests of workers and their families and provide safe, secure, fit for purpose social housing for all our workers.