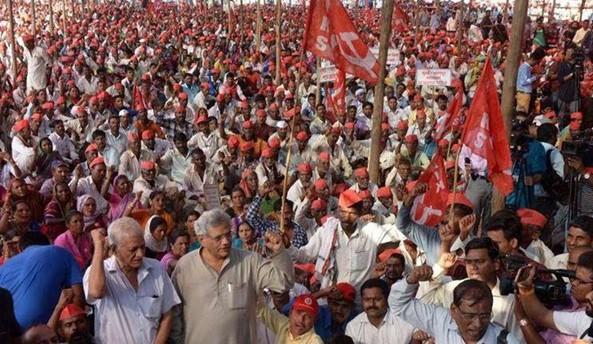 Farmers and opposition voiced their concerns in September as India’s President Ram Nath Kovind signed three controversial Agricultural Bills – The Farmers’ Produce Trade and Commerce (Promotion and Facilitation) Act, 2020, The Farmers (Empowerment and Protection) Agreement of Price Assurance and Farm Services Act, 2020, and Essential Commodities (Amendment) Act, 2020 – into law.  Congress, Trinamool Congress and the Revolutionary Socialist Party – among others – have opposed the bills on the grounds that they are “anti-farmer”. Shinith A.K and Ajay C Shaji explain.

The world is in the grasp of an epidemic for some months now. People’s lives and social order have been disrupted. Humans are in a final battle for survival. Yet the Modi government in India is not giving the citizens even a glimmer of hope. Instead, repression and corruption continue. It is a shocking fact that under the cover of the latest Covid package, the government has betrayed farmers with the very ordinances issued in the name of saving the farmers.

Two new bills (under the new Farmers’ Bill) allow corporations to trade in agricultural products – an area of free trade and free contracts – without government intervention. The third gives corporations the right of unrestricted storage of all kinds of agricultural produce. These bills will enable corporations to procure more, by bargaining crops from producers and selling them to consumers at artificially prices, thus paving the way for artificial scarcity, the legalising of hoarding, and increased black market activity.

The Farmers’ Bill is just a tool to reduce the farmer to the position of a corporate labourer. There is undoubtedly a crisis in the agricultural sector, one which has escalated to the point where most farmers no longer find it a profitable venture. This is the result of flawed governmental policies, who should have implemented steps to ensure fair prices and productivity rather than their current steps to promote contractless farming, which in turn, will alienate farmers from farm lands and the markets.

Thus, the fascist government is using the global pandemic as a cover to impose unconstitutional, anti-people, anti-worker, neo- liberal policies, by suspending the left and some opposition members from parliament for protesting against the bill, thereby sounding the message – loud and clear – that democracy is under threat.

This is consistent with the government’s attempt to silence the opposition, attempts that extend to charging Sitaram Yechuri, the General Secretary of Communist Party of India, for his part in organising demonstrations against the Citizenship Amendment Act, an act which could be used to divide people along sectarian lines.

The lack of constitutionality around the Farmers’ Bill is evident. The Central Government has clearly breached both the powers of states and the spirit of cooperative federalism in the passing of the Farmer’s Bill. Furthermore, during the passing of the bill in Rajya Sabha (lower house of Parliament) the request for a vote on the subject was rejected, even though the rules clearly state “the voting should be conducted even if a single member of the house demands to do so.”

Not only farmers but workers from all sectors have turned against the Modi government, as it tries to cut wages, eliminate job security, and increase working hours. The rights and benefits of the Indian working class is being undermined by a government that is making the pandemic an opportunity to blame and thereby plunder the workers in order to ensure the profits of the corporate world are intact. The politics of the BJP Government entail the denial of freedom of expression, a decade of barbaric killings, and the expulsion of the Dalits (a specific class of people). The BJP is using the political power it has gained to deliberately create segregation among the people on the basis of caste, religion and gender,and also to create societal insecurity by slaughtering the poor.

The rape and murder of a Dalit girl in Hathras, Uttar Pradesh, reflects such inhumane political activity. A 19-year-old Dalit girl was gang-raped, in an organised criminals act by the Thakur community who brutally broke her spine, spinal cord and even slit her tongue. Eventually the girl died from her injuries at the hospital. The body of the girl was snatched from the hospital by police in the middle of the night, She was cremated without showing any attention to the parents or giving a chance for the funeral, in a clear effort to destroy criminal evidence. The United Nations have expressed shock over the case. Even respect due to the corpse was denied.

Incidents of this kind have been common to those parts of the country where the BJP tries to send a message that “a Dalit has no right, to live honorably or to die”, comparable to the days of the Holocaust. The BJP led Central Government has encountered a stumbling block in the leftwing government of Kerala. A prime example is Kerala government’s plan to challenge the Farmer’s Bills in Supreme Court, pinpointing the constitutional breaches and demerits in its passing.

The rule of the Modi fascist government has been created by insecurity and violence and by deflecting attention from the real issues. In one such act, as set up by right-wing Bjp &Congress, four young comrades of CPI(M) were killed in planned actions over the past month. The intent was to provoke the left into acts of violence and to disrupt law and order in the State of Kerala. With the use of State powers (NIA, CBI, UAPA), the suppression of all conflicting views, a lack of transparency, and the encroachment of the judicial system, the Largest Democracy is going through atrocious and dark times.