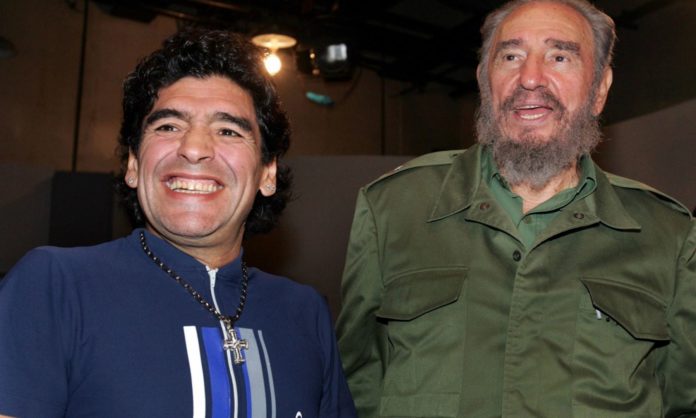 Diego Armando Maradona first visited Cuba in 1987, where he became firm friends with Fidel Castro, whom the Argentine greatly admired. Maradona travelled frequently to the island, and credited Fidel and Cuban healthcare with saving his life in 2000.  “He was like a father to me,” said Maradona after learning of Castro’s death in 2016. “He opened the doors to Cuba to me when Argentina was closing them on me. “When they told me last night, I cried like hell… today he’s leaving but he will keep guiding us like Che, like Chavez. Someone who can guide us from heaven is arriving to heaven.”

“With Fidel Castro, Chavez, Luiz Inacio Lula da Silva and Nestor Kirchner, I believe that we can form a good alliance against poverty, corruption and sever the relationship subsidiary with the United States, ” Maradona said in 2005. In 2013, he said emotion of having known Chavez had been “perhaps stronger” than a World Cup victory.  “I love women,” said Maradona in 2005, “but I came out completely in love because I knew Fidel Castro… and now I know a giant like Chavez.”

In 2018, Maradona declared himself  a “soldier” for Chavez’s successor, Nicolas Maduro. The last trip to Caracas to meet his “brother” was in January this year, when Venezuelan state television broadcast an informal meeting with the president and his wife, Cilia Flores.

“Dear Lula, Diego is with you,” Diego Maradona wrote on his Facebook and Instagram accounts in 2018 to express his support for the former president of Brazil. With a T-shirt of the Brazilian team, featuring the name of Lula and the number 18, Maradona posed in support of the PT leader.

Pope Francis has remembered Diego Maradona, the “poet of soccer”, in his prayers after learning of the football legend’s death. A Vatican spokesman said that the pope “thinks back fondly to the times they met in these years and remembers him in prayer.” Maradona, while personable towards the current pontiff, he once told John Paul II “I’ve been to the Vatican and seen the gold ceilings. And then I hear the Pope saying that the Church was concerned about poor kids. So? Sell the ceilings, mate!”

Evo Morales, the former president of Bolivia and a huge football fan, joined in condolences for “the best football player in the world…. with pain in his soul” of the death of Diego, “a person who suffered and fought for the humble”. Last year, Maradona wrote on his Instagram account: “I regret the orchestrated coup in Bolivia. Above all for the Bolivian people, and for Evo Morales , a good person who always worked for the most humble.”

Maradona often expressed solidarity with the Palestinain cause, and was quoted as saying: “In my heart, I am Palestinian”. In 2018, Maradona met with Palestinian President Mahmoud Abbas in Moscow. “President Abbas has a country and has a right,” said Maradona. “This man wants peace in Palestine.”

Last September, in one of his final political actions, Maradona came out in support of  a wealth tax on the rich in his country. “I fully support the imposition of a wealth tax. It is difficult to talk about the rich in this country. There are rich and poor. Those who do not have money beg in the streets,” he told the Argentine newspaper, La Nacion. He went on to make a plea for projects to distribute food to the poor neighborhoods. Maradona said: “Help people with food. This is not a show, because I spent time with hunger. I experienced it in Fiorito, and it is something more difficult than the cold.”

In 1986 in Mexico, Maradona scored the most popular goal of the hundreds that hit the back of the net throughout his career. The parts of the planet that were once part of an empire on which the sun never set took particular delight in the strike credited to the “hand of God”. “It was England, let’s not forget, and the ‘Malvinas’ were fresh in the memory,” said Maradona. “It was a battle, yes, but on my battlefield.”