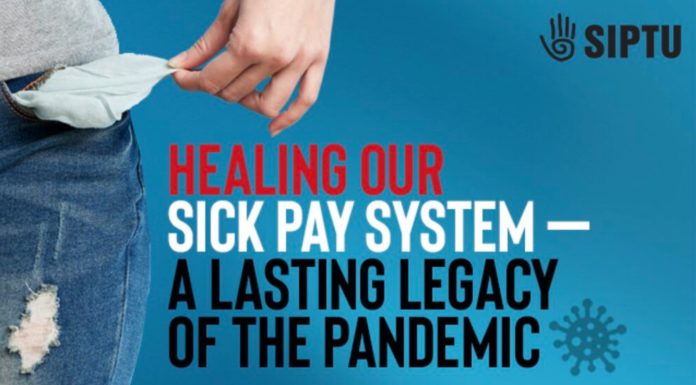 LookLeft has a roundup of the week’s events (but the most important reminder is to wash your hands, keep your distance, and join a union).

If you’re sick of walks and are looking for a Zoom event, on Wednesday Comhlámh is asking Gavan Titley Is free speech racist? and on Thursday People Before Profit will be explaining Why we need fighting unions. Bríd Smith TD will be speaking alongside a number of union members (all in a personal capacity).

Also on Thursday, the Galway Alliance Against War and Independents4Change are hosting an online Free Assange meeting at 8pm to discuss the case, it’s threat to human rights and fundamental freedoms, and the overwhelming importance of fighting for Julian Assange’s release. You can prepare for the meeting by having a read of Caoimhe Garland’s recent opinion piece.

If you’re more of a cultured type, Drink and Draw at the Arts Bar are asking people to paint a portrait of Michael D Higgins. Each to their own and all that.

The unions have made it clear that if we want to take public health seriously all workers need proper sick pay The Government has indicated that it will undertake a review into the matter so SIPTU is putting on a webinar this Friday to examine a range of ideas and proposals that might inform such a review.

Have you had an abortion in Ireland since January 2019? Or have your tried to access abortion in that time? The Abortion Rights Campaign wants to hear from you (in a confidential survey).

Youth Against Racism & Inequality (YARI) has planned to hold socially distanced protests for a Black History Month in Cork, Galway and Limerick. Face coverings mandatory and sanitiser will be available.

Brexit, Covid and the Budget are the major topics in the Oireachtas this week.

There’ll be statements on the arts and Covid-19 on Tuesday and on business and Brexit on Wednesday. The Government will also be bringing the Regulated Professions (Health and Social Care) (Amendment) Bill 2019 and the Official Languages (Amendment) Bill 2019 (if you want to know how much Government cares about this topic, the Act was reviewed back in 2014 and the General Scheme of this Bill was published in 2017).

People Before Profit has a motion on the Pandemic Unemployment Payment on Wednesday. Sinn Féin has a motion on disability services on Tuesday and the Trade Union Representation (Miscellaneous Provisions) Bill 2018 on Thursday.

On Wednesday the Seanad has the Investment Limited Partnership (Amendment) Bill 2020, statements on the HSE Winter 2020 Plan, and Labour’s motion on illness benefit on Wednesday. Thursday will see statements on Leaving Cert 2020 and then Rónán Mullen and Michael McDowell’s motion on Irish and Chinese relations on Thursday.

Last up: committees. This week a lot of committees will be scrutinising the Revised Estimates 2020. On Tuesday the Joint Committee on Agriculture and the Marine will be looking at the impact of Covid-19 on the agriculture sector.

The Public Accounts Committee will be looking at NAMA’s management of the Project Nante’s loans on Thursday.