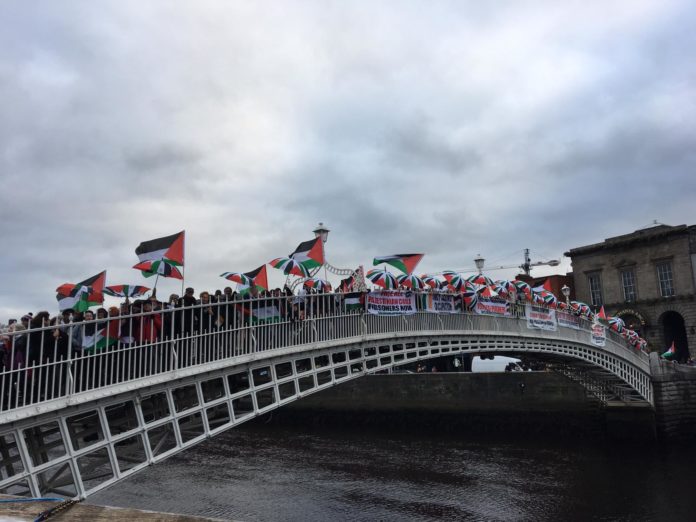 The tech companies we rely on to live our lives are making it increasingly difficult to access content on Palestine. But that’s not why you should listen to The Palestine Podcast.

Leila Khaled was due to speak over Zoom at an ‘open classroom’ on gender, justice and resistance at the San Francisco State University on 23 September, but the event was cancelled. Neither the organisers nor the university cancelled it, Zoom did. And Facebook. And YouTube. Only a month earlier Facebook took down the Palestinian health ministry’s page in the middle of the pandemic,  the latest disappearance in a series stretching back years, including the shutting down of accounts belonging to Palestinian photographers, editors, and at least one press agency.

It is against this background of attacks on academic and press freedoms by the private companies we rely on to live our lives that the Ireland-Palestine Solidarity Campaign (IPSC) produces The Palestine Podcast. Originally acting as a receptacle for audio from the IPSC’s own public meetings, since May episodes have been released almost weekly and are taken from different English-language events. Lasting from between an hour to an hour-and-a-half each, the podcasts are essentially deep-dives covering topics as diverse as babies born without residency to the refusal to return bodies of the deceased to their loved ones and everything in between.

It is expected that listeners will have a certain level of knowledge going in, not least familiarity with terms like the Green Line and ‘48 Palestine. Listeners are trusted to be able to make up their own minds without being guided. A number of episodes deal with the issue of Apartheid, with some speakers advising listeners not to classify all of Israel’s crimes as Apartheid (for example, Israeli human rights lawyer Michael Sfard warns that the specific criteria are not met, for example, in Gaza), while others counter that Jerusalem, the West Bank, Gaza and Israel are ‘all part of the Apartheid regime’.

As a podcast, there’s a lot working against it. Podcast listeners have generally become accustomed to having one familiar voice hosting podcasts, even in situations where the majority of an episode may then be provided by another contributor. Listeners to The Palestine Podcast have to rely on the show notes for context and, depending on the particular episode, on the speakers for specific details.

There are additional caveats about sound quality. Raise the volume to hear the IPSC mumblecore extraordinaire introduction and you’ll be deafened when the actual discussion starts. Over the course of an episode volume and sound quality can vary massively from one speaker to the next, as audio is recorded from Zoom and other platforms.

And yet. Irish audiences can still get a lot out of The Palestine Podcast: not just detailed analysis of specific Palestinian  issues but a greater sense of the solidarity actions taking place across the globe. Cases on procurement law have been taken in Canada and the Netherlands. Discussions on the similarity to Black Lives Matters are taking place in the US. An Argentinian court ruling that Spain must exhume bodies from the Civil War may  provide an example of how to use universal jurisdiction for third parties to bring pressure upon Israel.

Listening to a number of episodes provides another key take-away: frustration at the overwhelming – even suffocating – feeling that even when we get to hear Palestinian voices, they must provide expert reports on international human rights law, public procurement, planning regulations and be calm and measured in the face of their own destruction. Palestinians cannot be imperfect and normal. In short, they are not allowed to be human.

So listen in, while you still can.

If you only listen to one episode: Episode 44. Khaled Quzmar, Nery Ramati & Eamon McMahon at the ‘Palestinian Children’s Conference’ [2019-11-23]