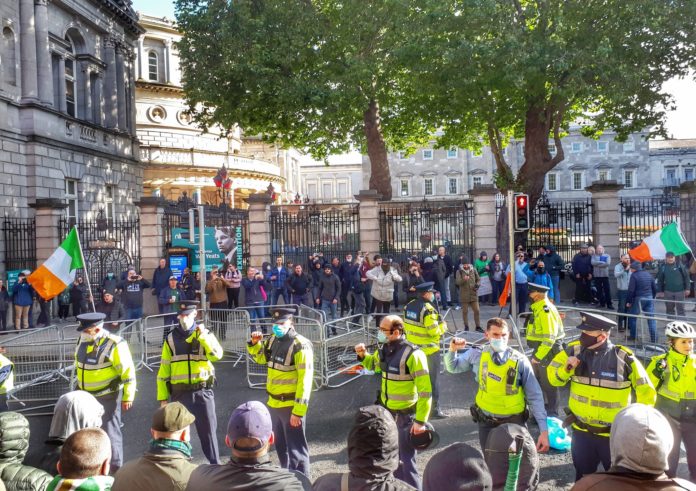 Remember, wanting to create a society based on a racial hierarchy and wanting the opposite of that are not the same thing.

The self-styled hardmen of the National Party suffered some bruised egos yesterday when, after weeks of planning, they could barely gather 100 people outside the Dáil and then had to be protected by a wall of steel barricades and lines of Gardaí when challenged by 150 anti-fascists.

Unfortunately, instead of enjoying the satisfaction of literally running fascists off the streets of Dublin, anti-fascists then had to explain to the journalists who were there what had just happened.

The Irish Examiner printed the immortal lines “the anti-fascists are referred to as antifa, but it is not clear what exactly they represent” and congratulated gardaí for the ‘professional and swift manner’ with which they handled the ‘flare-up’. While the Examiner admitted the whole matter was over in a minute or two, the Irish Times gave readers a blow by blow account of the anti-fascists walking down the street. The journalist complained that the anti-fascists asked journalists for credentials.

Twitter users had to explain why protesters might be suspicious of their names, images or details getting into the wrong hands.

Others had to explain that the ‘both sides’ narrative is not very useful when one side wants to violently create a society structured on a strict racial hierarchy and the other side wants to not do that.

Then there were the history buffs.

And, finally, some took on the very important work of describing ‘antifa’ and its dastardly methods.