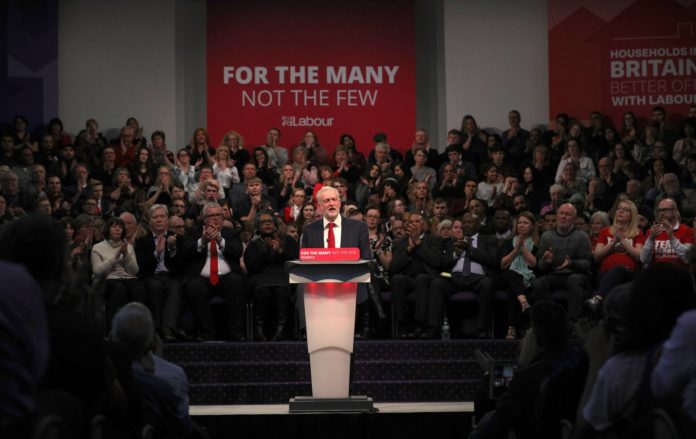 I write this as a Labour insider, who, for five years has been embroiled in the ugly civil war that has engulfed our organisation. Working with hundreds – if not thousands – of local activists to transform Labour into a vehicle for socialism, I have witnessed first hand how the cowardice and incompetence of our own leadership has undermined us. With the expulsion of Rebecca Long-Bailey from the Shadow Cabinet in June, it is long past the moment at which we need to speak out.

It has not been easy to do so; as Corbyn’s tenure as Labour leader came to an end, the left naturally rallied around him in recognition of the sheer personal hell he had been subjected to over the past four years.

A concerted media campaign of personal smears and abuse, a manufactured witch-hunt against anti-Semitism within Britain’s foremost anti-racist political party and raging social media disinformation campaigns from the Tories have all marred his premiership. As has the consistent sabotage and disloyalty of the Labour right, the majority of the Parliamentary Labour Party and the Party’s full-time staff.

Although it is absolutely right and proper to call out the flagrant hypocrisy and corruption of our established media interests, the Tories and the Labour right — as the dust settles it also has to be recognised by the British left that Corbyn has been a singularly incompetent leader. That incompetence cannot be displayed more clearly than by the helplessness and complete lack of institutional security the post-Corbyn left has within the Labour Party in his absence.

You could have read the runes and foretold Long-Bailey’s downfall during her leadership campaign, with her series of capitulations to hard-right demands, including the Board of Deputies pledges.

These concessions also included a commitment to adopt the IHRA definition of antisemitism “without clarification” (this includes rules which make it ‘anti-semitic’ to point out the fact that Israel was founded as an ethno-state, ‘anti-semitic’ to accuse any Jewish person of operating on behalf of Israel against the interests of the state in which they live (whether they are paid government lobbyists or not) — and ‘anti-semitic’ to draw any comparison between contemporary Israeli policy and that of the Nazis — including, for example, their annexation of Palestinean land as a comparison to Hitler’s annexation of Czechoslovakia).

But although many on the left were rightfully angry with Long-Bailey over these issues — the reality was that her hands were already tied by the absolute surrender of her colleagues to these terms over several years.

With a galvanised Labour right buffering new leader Keir Starmer, the project to remove every trace of Corbyn support from the new shadow cabinet and staff of the party has begun. The first scalp was former General Secretary Jennie Formby, whose request for resignation was Starmer’s first act once elected leader. With the removal of Long-Bailey, the right seems determined to remove all left influence within the party machine so as to never allow an left insurgency to happen again.

Through poor leadership we have squandered any opportunities we had to entrench ourselves against the always likely outcome that Corbyn would not miraculously sweep to power in Britain and enact a new radical, social democratic consensus.

Here are just a few of the Corbyn movement’s failures:

Among the unspoken victims of the past four years, the membership, who despite absent leadership, have shown remarkable loyalty and discipline in the face of constant slander from the national press, their own elected representatives and party staff. The anti-Semitism ‘crisis’ in Labour is the perfect example of this.

From 2016, the Labour front bench went from rightly calling out the influence of paid Israeli agents in acts diplomatic sabotage and smear campaigns to signing-off on a definition which made even acknowledging the existence of such things an anti-Semitic act. The Party moved from a full-throated defence of Palestinian liberation, in the face of movement to obliterate the Palestinian state and people, to simpering self-admonishments for ‘not having dealt with the problem’ of a statistically insignificant number of Labour members using the incorrect definition for Zionism.

The left leadership’s willingness to throw its members and key allies in Labour under the bus — rather than face up to clearly cynical attacks from the press — is a betrayal that should never be forgotten by the hundreds of thousands who looked with such hope and determination towards their success.

2) A total lack of cultural self-awareness, the profusion of nepotism and favouritism, and small-scale corruption around the leader’s office.

The Labour leader from the beginning has been surrounded by middle-class Oxbridge graduates, a wealthy South-London bubble of volunteers and social media whizz-kids, who are politically inexperienced and culturally at odds with the country. The continued indulgence by the left of a host of fashionable campus causes around lifestyle politics and sexuality — such as the legalisation of prostitution — has left it alienated from the majority of Labour voters, who are primarily interested in universal social and economic justice, high welfare spending, economic planning and decent employment opportunities.

There is a total lack of message discipline, a lack of effort to unite voters around core messages, and an almost in-principle desire to draw abstract red lines around an ever-thinning core of enthusiastic middle-class activists with decadent ideas built around the self and individualism — ideas which, by default, isolate those who consider themselves culturally heterogeneous.

The descent of Long-Bailey’s failed “continuity” leadership campaign into this vapid cultural hole emblematized the extent to which the left has been swallowed by this toxic culture war against the majority.

3) A failure to make constitutional change and embed the left into the structures of the party.

Unlike the right, Corbyn and John McDonnell have never prioritised the permanent establishment of the left as a force within the staff, the elected structures, or the constitution of the Labour Party. The much-vaunted “democracy review” was an entirely wasted opportunity to reduce the constitutional clout of the PLP and local councillors — bastions of the right — and to empower unions and members. In place of serious constitutional change, we were treated to paltry and often unworkable promises, like direct elections for council leaders and marginal changes to the processes for deselecting MP candidates.

Time and time again opportunities for Corbyn to establish himself as undisputed leader of the organisation were not taken.

From voting away his own majority on the national executive committee in 2016 (by siding with calls for an extra Scottish and Welsh NEC representative) to failing to discipline MPs like Margaret Hodge — whose outrageous displays of public abuse and indecency fell more than once foul not only the rules of the party, but also the laws of the country.

As members were marched slowly in rows towards the arrayed machine-gun posts of the party’s disciplinary procedures, MPs and right wingers — constantly briefing the press and inciting hateful abuse against their colleagues — were let off the hook time and time again.

Jackie Walker (who is Jewish) was disciplined for pointing out in a Jewish Labour Movement meeting that Jewish schools are not the only inner-city schools to hire security; Marc Wadsworth was disciplined for calling out Ruth Smeeth for passing Labour press releases to Telegraph journalists (a claim she never actually denied); Chris Williamson was disciplined for standing as a lone voice against the unfolding insanity of labelling the Labour Party “institutionally racist.”

The vast majority of the membership would have fought back on all these fronts, but could not do so when the leadership had no intention of letting us: those that did fight found themselves cut off and betrayed by the movement they were trying to defend.

5) Incompetence and spin: Corbyn’s special ingredient in the political discourse of 2016 was his authenticity and honesty — qualities which came naturally to him — and qualities that were swiftly sacrificed on the altar of politics-as-usual.

Immediately after taking office, he and his team chose so many idiotic, defensive lines against the unrelenting onslaught of the press that he quite quickly found himself painted into a corner. Refusing to accept that there was a civil war in the Labour Party tied one arm behind his back, whilst factional warlords like Tom Watson took unrestrained swings.

Apologising for non-existent anti-Semitism allowed the press to entirely untether their claims of anti-Semitism from reality and not bother to research the crazed sources they were quoting.

Perhaps most importantly, vacillating and compromising on the party’s Brexit position turned every announcement on the issue into a running joke. By the end, from being the straight-talking voice of authenticity in Labour, Corbyn’s public pronouncements were universally reviled as deliberately-vague soundbites, repeated ad nauseam, in a desperate attempt to control an incomprehensible message.

Post-Corbyn, the British left has mobilised more people than ever before since the collapse of our mass trade union movement in the 1980s — but, unlike the trade union movement, we have no established structures or routes for action to take these recruits in the absence of Corbyn’s leadership of Labour. We have neither built nor bolstered institutions of working class power during this time — this has effectively been time entirely wasted.

Palestinian solidarity is in tatters, which in turn undermines our anti-war and anti-imperialist movement. The cultural brand of the left – and socialism itself – is tarnished amongst millions of people who see the left as being obsessed with sexuality, gender and race — rather than the bread-and-butter issues which affect the majority of the country.

Corbyn’s failures cannot be forgotten by any left elements who are serious about moving on from the current quagmire. We cannot squander time and energy defending an idol who was so ill-equipped for the task laid before him, or the historical moment that befell him.

Future generations must know this truth, and understand that socialism is for the good of all — but doesn’t mean pleasing everyone. If there is oppression, there must be an oppressor: we must face the class enemy squarely. Corbyn and his lieutenants refused to do that. The next era of socialists and communists must never make the same mistake.