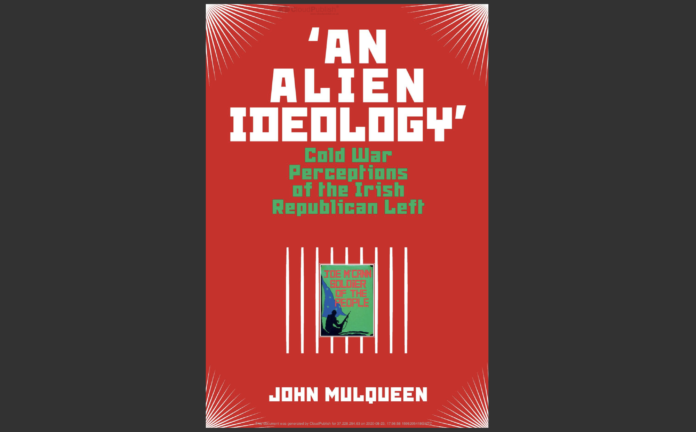 This is a book that is probably overdue. While the spying and general nefarious activities of the CIA and MI6 in Africa, Asia and Latin America are well known this book is the first attempt to quantify and analyse the extent and nature of UK/US surveillance of the Irish left. Specifically, it looks at the breath of intelligence gathered by the UK / US about the Communist Party of Ireland and the Workers’ Party (and previously Official Sinn Féin and Sinn Féin the Workers’ Party) and the prism through which the intelligence gathered was analysed.

The cold war extended from the end of WWII in 1945 to the collapse of the USSR in 1991. Mulqueen clearly shows that throughout this entire period the intelligence services of the USA and the UK kept a close, even obsessive, watch on the left in Ireland.

A number of very clear patterns emerge. The US and British embassies were nerve centres of intelligence gathering, or spying. The Irish intelligence agencies, especially the military intelligence unit G2, the Garda Special Branch, and the Department of Justice – through the near omnipresent Peter Berry in the Department of Justice – were willing collaborators with these embassies. The Roman Catholic Church was, additionally, as in Italy and Latin America, an enthusiastic anti-left collaborator.

The book is divided into two broad sections: 1945-1962 and 1963 -1992. Pre-1962 the Irish and US/UK intelligence services recognised that while a communist movement did exist, it was very small and lacked either influence or broad support. The authorities were, however, bothered by the potential of the Connolly Association to radicalise Irish emigrants in the UK, the influence of the CP in Northern Ireland on the trade union movement there, and the existence of an Irish peace group.

Reports to Washington demonstrate the Ambassador’s dismay at the existence of an Irish peace group and labelled all the participants as communists or communist supporters when in reality, many of the peace activists were committed members of different religious groups. The book demonstrates that this US paranoia with respect to the peace movement lasted right up through the entire Cold War, and was shared, to a greater or lesser degree, by both the Irish and the UK administrations.

The most major section of the book deals with the post-1962 period when the then Sinn Féin / IRA elected a new, young and radical leadership who moved the republican movement strongly leftward. As is clear from the documents quoted, it was a nightmare scenario for the authorities that a nationally organised movement like the republican movement – which still carried a certain prestige and deep latent support – would come under the influence of communism. What is interesting in looking at the pre-1970 split period is that the authorities seem fixated on the influence of people like Roy Johnston, Tony Coughlan and to a lesser extent John de Courcy.

Ireland had no knowledge of, or paid very little attention to, the massive education process which the IRA and Sinn Féin were conducting in the ashes of Operation Harvest. What is also interesting during this era, and indeed post-1970, is that both UK and US authorities believe that Republican Clubs / Official Sinn Féin infiltrated the civil rights movement rather than recognising the central role of the movement in the establishment of NICRA in 1967.

During the 1970s various security forces closely monitored the changing relationship between Official Sinn Féin and the newly united Communist Party of Ireland, as it went from one of perceived close cooperation in the early part of the decade to a more fractious relationship in the latter half of the decade. Clear policy differences emerged between the two parties. The book also notes that the CPI were upset that OSF/SFWP were gaining friends and influence within the USSR. Such alliances posed a threat to their status as the ‘fraternal party’ of the CPSU.

The book highlights that even before the USSR opened its embassy in Dublin in 1971, both the US and the UK embassies were fulminating about the possibility that the embassy of the USSR would become a hub for a KGB spying operation. The irony of their position as spies, operating out of their respective embassies, and with linkages, both open and covert, to government, media and the Irish security services never seems to have struck these CIA or MI5 agents. Subsequently all activity at the Soviet embassy was closely monitored by the US, the UK and the Irish Special Branch.

An Alien Ideology originated in Mulqueen’s PhD thesis. This background benefits the reader through the very detailed footnotes, the excellent index, and the extensive bibliography. However, the very scope of the book has, in places, created problems. In order to make sense of the main narrative of the book, namely the level of surveillance of the WP and CPI by the US and UK, the author must also make the audience aware both of the developments and changes within both these parties, and to outline the changing national and international situation. This outline is, of necessity, brief and it is not always clear when the political summary is being provided by the author or when it is a summary of the opinions of the intelligence services.

In particular, the defection of the now defunct Democratic Left group in 1992 is shallow. The central division underpinning the 1992 split was between socialism and social democracy and, accordingly, whether the WP was controlled by the membership or the parliamentary group. It was not, as argued by Mulqueen, a personality driven split.

The intelligence agencies largely overlooked the international, anti-war and solidarity work of the WP and the CPI. From the book it might wrongly appear that this was the limited of these two parties’ activities. While these were, in fact, important areas of work for both parties, for local party activists, international solidarity actions were an intermittent add-on to regular political activity.

The author makes clear that the US, in particular, looked at developments in Ireland through a cold-war lens while the UK usually looked at developments through a colonial / security lens. The question as to how valid or useful, or possibly distorting, these lenses were is not tackled in the book. Did all the spying and the subsequent analysis add anything to the security of the UK and US? Did the lenses used give these countries an accurate or distorted view of left-wing politics in Ireland?

Despite these caveats I strongly recommend this book. For younger readers and those outside of left-wing parties it will provide a valuable insight into the 1945 – 1990 period and will demonstrate the level of spying from “friendly” embassies. It is a pity that the book, through no fault of the author, is so prohibitively priced which will put it beyond the budget of many readers. Make sure your library orders a copy.