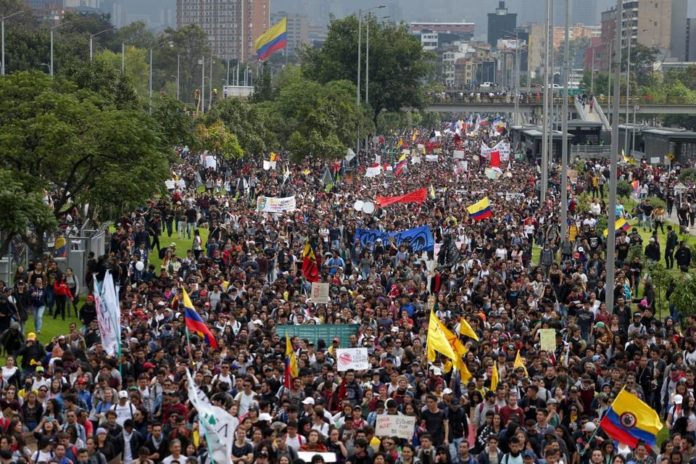 With political violence on the increase in Colombia, James Patrick Jordan examines its roots and whether Colombia’s 2016 peace accords can endure.

Colombia and numbers have their own special relationship. On one of my first visits there, I consulted a map and estimated the place I wanted to go was only around 300 kilometers away. I did not consider the two Andean corridors we would cross, nor the big rockslide we would encounter. A journey I expected to take a few hours required all day and night.

My partner, Raquel Mogollón, recorded testimony from a five-year-old girl in a farming community in the Department of Tolima. Her father had been killed by members of the Colombian Army who then dressed his corpse in insurgent garb. He was another of the “false positives”, young men and women murdered by soldiers and claimed as enemy combatants killed in battle. She described how soldiers subsequently came to her village in helicopters to arrest her grandfather.

You see, that’s the thing about numbers and Colombia. The scale on my roadmap told me a centimeter equals 20 kilometers, but it left out the steep and narrow mountain roads. A little girl can tell you she’s all of five years old, but that tells you little of the adult-sized scars she carries.

As I write this article, I consult the Indepaz list of victims of political killings of social leaders, human rights defenders, and former insurgents. The list is maintained in cooperation with the Marcha Patriótica (Patriotic March), one of Colombia’s largest popular movements for a just peace, one we at the Alliance for Global Justice have multiple connections with. I trust these sources to be in touch with the most grassroots of the grassroots. They list 292 victims in 2020 as of October 16, the 290th day of the year. They list 970 victims between the end of November 2016 and July 15, 2020.

But is everyone accounted for? Did they include the 13 protesters who were killed in one day in September by the notorious and US funded ESMAD riot police? No, not there. These victims were protesting the police killing of Javier Ordoñez, beaten and tasered to death by police, while onlookers filmed it all, in the early hours of the morning. Javier’s crime was that he had violated Bogota’s curfew. Weren’t these 13 protesters human rights defenders? That would bring the 2020 total to 305.

One will see different tallies. In a nation where the impunity rate for political murders hovers between 97 and 100%, and where uncounted people are disappeared never to be seen again, it can be hard to be exact. And these are only the dead. How many are left wounded? What of the displaced? Over eight million Colombians have been forced from their homes because of political violence.

While numbers may conflict, trends do not. Every credible analyst knows the situation is worsening, whatever set of statistics they are using. When negotiations began in 2012, enemies of the peace increased their assaults. When the peace accord was finally implemented in November 2016, a campaign of terror was enacted by far-right death squads and narco-traffickers. The killings reached a rate of one victim every three days. In the Summer of 2018, following the election of Ivan Duque as president, we saw killings rise to a rate of one every other day. In late December 2019, the rate rose to one per day.

On August 4th, Álvaro Uribe was arrested for his paramilitary connections. The rate of political killings again started to creep up. Uribe is the leader of Colombia’s extreme Right. He is a former President, current Senator, Duque mentor, peace accord opponent, US Defense Intelligence Agency-listed narco-trafficker, and all ‘round, black-hearted bat-out-of-Hell. He has enjoyed close relations with US politicians. Uribe participated in a secret meeting with President Trump at his Mar-a-Lago Resort in April 2017, over a year before Duque’s election. Also present was former Colombian President Andres Pastrana. These meetings were held without notifying either the sitting Colombian President Juan Manuel Santos or President Trump’s own staff. One can only wonder what they discussed.

Another factor exacerbating the rise in killings has been the coronavirus pandemic. The quarantines and curfews may have rendered it chillingly easy for would-be assassins to locate Community leaders, former insurgents, and their families.

There are real, material reasons Colombia’s peace is under assault. The peace accords include components that address the war’s underlying causes. These accords allow for restitution of lands for millions of the displaced, the reintegration into civil society of former combatants, and rural development and crop substitution programs in exchange for voluntary eradication of crops with illicit uses. However, the Trump administration has fervently pushed for the Colombian government to reject this part of the accords in favor of violent and forced eradication. Rural development and the return of displaced persons contrast sharply with the dispossession required by transnational corporations, big landowners, and narco-traffickers. Terror and displacement guarantee unfettered access to resources.

Painfully, the obvious must be stated: civil war in Colombia is not over. Following the implementation of the peace accords in 2016, an estimated 1,000 members of 15,000 to 18,000 soldiers of the former FARC-EP (Revolutionary Armed Forces of Colombia-People’s Army) refused to disband. By the end of 2019, we were hearing of another 2 to 3,000 ex-insurgents who had returned to armed struggle. The National Liberation Army (ELN) is said to have around 5,000 members. Negotiations with them have been hampered by the Duque administration’s insincerity and subject to repeated sabotage. We can, then, talk of at least 8,000 insurgents active in Colombia today.

Nevertheless, it would be a mistake to say that the peace process has failed. Many components remain in place and the vast majority of former FARC-EP troops have laid down their arms. Most are in stages of being reintegrated into civil society with varying levels of success. Recidivism of insurgents has been relatively low. And while it is trying to function within an atmosphere of threats, intimidation, and violence, the new FARC (Alternative Revolutionary Force of the Commons) political party, as well as former FARC members participating in other parties, do so legally and have even had some electoral victories. There are significant divisions in the Colombian Left, including within the new Party. But thus far, the avenue of electoral participation does exist.

Still, one cannot say the peace process is healthy or that it will survive. If the peace in Colombia does endure, it will not be because of the good will of the Duque administration or the previous Colombian government. Duque’s own predecessor, Juan Manuel Santos, was painfully slow to fulfill government commitments, and only a quarter to a third of those commitments have been met to date Colombia’s peace will also have to weather assaults by the country’s oligarchy and their political chiefs in Washington, DC and on Wall Street.

If peace is to endure, it is the country’s popular movements, aided by internationalist allies, who are best able to make that happen. On November 21, 2019, the Colombian people rose up in a national strike (above), the largest since the 1970s. Millions participated. The primary demand was for the peace accords to be honored and the violence to stop. Since then, despite the pandemic, there have been further strikes and protests, and there is currently a minga underway. The minga is a kind of collective effort initiated by Colombia’s indigenous peoples.

Indigenous, Afro-Colombian, and rural farming communities have been disproportionately targeted by the violence. These communities, led by Colombia’s original people, have arrived in Bogotá to demand an end to the violence, respect for land rights, and a face to face meeting with President Duque. The minga will merge with a national strike called by unions and social movements for Wednesday, October 21.

Unfortunately, on the international stage, Colombia is not held accountable. Colombia is the sole Latin America partner with NATO. Earlier this year, the US government passed its biggest military, police, and security aid package to Colombia in nine years. Colombia has sent troops to Iraq, Afghanistan, even Yemen. Colombian soldiers have patrolled Central American and Western African air and sea space with US troops. The country provides a staging ground for interference in and threats against Venezuela. Colombia has trained well over 50,000 police, military, prison, and court personnel around the world. Clearly, Colombia’s government plays a vital role in the designs of US/NATO militarism and Empire.

We can see, then, that peace in Colombia would be a major step forward for peace around the world. If that peace can take root and blossom into a real and participatory democracy, the repercussions would be felt across the planet.