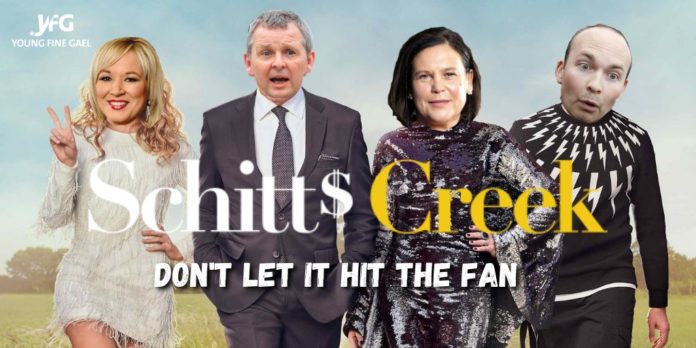 Young Fine Gael, the home of careerists and opportunists, each member more out of touch with ordinary people than the last.

To say that the baby Blueshirts are less than well received on social media would be an understatement.

The joke here being, of course, that Schitt’s sounds like shits. Very original and creative there lads, that definitely wasn’t what the name was supposed to allude to in the first place!

For their troubles, they have received a hammering on Twitter.

First off, many Twitter users are of the opinion that Young Fine Gael couldn’t possibly be young with banter like that. Either that, or they’re aren’t much craic.

Others were … less nuanced, but perhaps more ruthless in their take on the post.

As if 2020 wasn’t bad enough, the youth wings of right-wing political parties continue their efforts to appear ‘hip’ and ‘trendy’, all while their parties continue to attack ordinary working people and their communities.

One Twitter user was quick to point out that isn’t the first time that Fine Gael have produced some pretty bad social media content. During the 2020 general election, they tried to embarrass their current coalition partners Fianna Fáil with this cringeworthy video, Benny Hill theme tune and all.

If Young Fine Gael are the future leaders of this country, things won’t be getting better for ordinary people anytime soon.