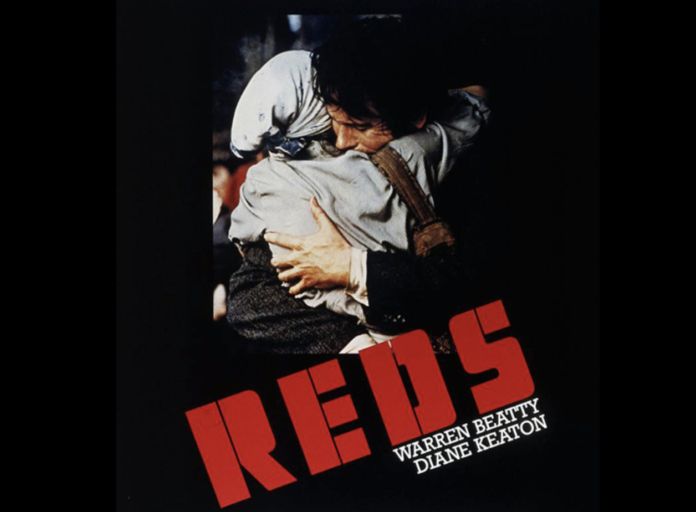 Not just as left-wing as mainstream US cinema has ever been, Warren Beatty’s Reds is unrivaled in its scope and scale, writes Tara Brady.

By 1981, the edgy, counter-cultural cinema that Peter Biskind so vividly chronicled in Easy Riders, Raging Bulls (1998) had, for the most part, softened into mainstream sensibility. The same George Lucas who wrote and directed the cerebral THX 1138 in 1971 now toiled and special effects and the matinee-inspired franchises, Star Wars and Indiana Jones. This new infantilised cinema would soon become the norm in risk averse Hollywood. Several headlining-making loss-makers – Michael Cimino’s Heaven’s Gate, Steven Speilberg’s 1941, William Friedkin’s Sorcerer, – would further batten down the studio hatches. Of these, Reds is the most remarkable picture.

A 195-minute, Paramount Studio-backed biopic of John Reed – the American journalist who witnessed the October revolution in Russia and whose account of the birth of the Soviet Union, Ten Days That Shook The World, is regarded as a classic – the film is more formally daring than any picture that emerged from the studio lots that year or during the fruitful era of New Hollywood. It is, in fact, unrivalled by anything in American cinema in its scope and scale.

A docudrama which is interspersed with testimonies from “witnesses”, including interviews with the 98-year-old Scott Nearing, authors Dorothy Frooks and Henry Miller, and various labour and civil rights activists – Reds offers an epic account of American Communism

How on earth did Warren Beatty, who wrote, directed and starred, manage to persuade Paramount to part with $32 million to bankroll a project that devotes a considerable chunk of script to the frictions between the American Socialist Party, the Communist Labor Party and the Communist Party of America? And a film that was released one year into Reagan’s presidency to boot?

In the late 1970s, when Beatty wasn’t knocking on doors and leafleting on behalf of presidential hopeful George McGovern, he was making a great deal of money as the star and writer of Shampoo (1965), and as the star and co-director of Heaven Can Wait (1978). Riding high on those successes, Beatty returned to a long-cherished dream of making a film about  “John Reed: Harvard guy goes over to the Soviet Union and ends up being buried in the Kremlin wall.”

It helped, in terms of persuading studio executives, that Reed (played by Beatty) was an adventurous, romantic figure who Upton Sinclair once called “the Playboy of the Revolution”. It also helped that Reds is party a love story between Reed and socialite-turned-artist Louise Bryant (Diane Keaton), who is wooed through Reed’s ideas on the profit motive in the first world war, ideas that were developed in Lenin’s Imperialism: The Highest Stage of Capitalism in 1915.

Bryant later became involved with the playwright Eugene O’Neill, played by Jack Nicholson.  Beatty claimed to have tricked Nicholson into the role by telling him he needed an actor who could convincingly take a woman away from Beatty. To which Nicholson said, “There is only one actor who could do that: me.”

Reds is far from a complete red-washing. In Beatty’s depiction of the Soviet Union, Reed contends with food and fuel shortages, and the lemon-eating head of the Comintern, Grigory Zinoviev (Jerzy Kosinski).

But save for a few pro-Soviet films produced by Hollywood during WWII – films like North Star (1943), Mission to Moscow (1944) and Song of Russia (1945) that were soon of great interest to the House Committee on Un-American Activities – Reds is as left-wing as mainstream American cinema has ever been.