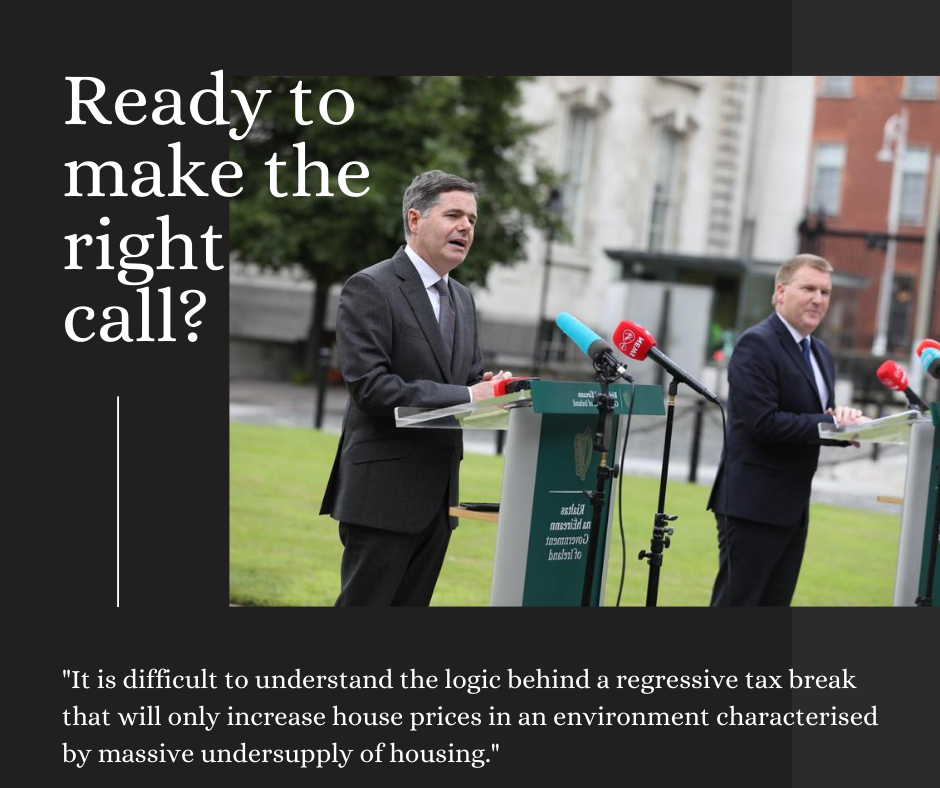 With Europe in deep recession, Tom McDonnell of NERI looks at the government’s recent stimulus package and argues that the post-covid economy must be based on growth, equity and sustainability.

The Western European economies are suffering their deepest recessions in decades, yet even so there is potential for a strong recovery should the virus be contained and the right policies taken at national and European levels.

Thus far the correct approach has been taken with regard to the economics of the pandemic situation. The pandemic has fundamentally changed the relationship between the state, businesses and workers. We must reassess our economic model in light of the sacrifices made by workers in essential services. The indispensability of basic services and the welfare state are being brought into sharp focus.

Wage subsidy and furlough schemes will help preserve the productive capacity of the economy by keeping businesses alive while income supports will help preserve demand and keep households afloat. Crucially, governments and central banks have expressed willingness to do whatever it takes to rescue their economies. Looking ahead, governments will need to act as the liquidity and income source of last resort until such time as the economy can fully reopen and then reassume these responsibilities if and when there is a second lockdown.

While the economic context is highly unusual the broad principles of good economic management remain in place.

So what should we make of the July stimulus? We’ll start with some positives. The government has wisely embraced a Keynesian strategy aimed at preserving incomes and demand. The deficit in 2020 will be close to €30 billion and it will be near €15 billion in 2021.

During the last crisis deficits of this extreme size would have prompted immediate austerity – but government borrowing costs are now less than 1% – and there is an understanding the economy cannot survive without massive and unprecedented state intervention. A cumulative increase in the debt of €45 billion over the 2020-21 period will add around half a billion to annual interest expenditure. This is eminently affordable.

The extension of the wage subsidy scheme beyond the coming winter is enormously expensive at €1.9 billion but absolutely the correct decision. It will keep the economy from collapse and should eventually be transformed into a German/Nordic-style short-time work scheme. The extension of the Pandemic Unemployment Payment (PUP) at a cost of €700 million is a welcome life-line for many households although the speed and arbitrariness of its tapering is a concern.

The expensive cut in the standard VAT rate (€440 million) makes little sense as a measure to boost demand. The Covid-19 crisis unlike the 2008 financial crisis is a supply-side recession. These types of recession tend to be more damaging and less amenable to traditional policy responses. In this case, the problem is one of confidence – not spending power.

Therefore the decision to cut VAT is better understood as an indirect but administratively simple way of subsidising business to help offset their losses. Do not expect prices to fall. That is not the intent. The €600 million commercial rates waiver should similarly be seen as an indirect business grant that is administratively simple and quick to implement. The major downside of these policies is the likelihood of significant deadweight loss. The ‘Stay and Spend’ initiative to boost domestic tourism will likewise mainly support activity that would have happened anyway – and will disproportionately benefit richer households.

The worst decision was the increased generosity of the Help-to-Buy scheme at a cost of €18 million. It is difficult to understand the logic behind a regressive tax break that will only increase house prices in an environment characterised by massive undersupply of housing. A waste of money that will simply push house prices further out of reach.

As we move past the support and stimulus stages of the response to Covid-19 we will have to make difficult choices about what to prioritise. My view is that economic policy should focus on the triple bottom line of growth, equity and sustainability.

In terms of fiscal policy, and in order to support sustainable growth, the emphasis post-2021 should be on green infrastructure, on significant increases to public research and development, and education spending, on public transport, and on expansion of subsidised childcare.

Increased funding for universal basic services, especially housing and healthcare, alongside sufficient levels of social transfers will help ensure that the economic recovery and future development is more inclusive. This applies not just to Ireland but to all states.

On the other hand, there is little merit in further narrowing the revenue basis over the medium-term. Rather, there is a strong case for increasing revenue from taxes on wealth, on property, on passive income, on environmentally damaging activities, and on employer social insurance.

Ireland generates much less revenue from taxes and social contributions than do similar Western European countries. If we don’t close the ‘tax gap’ we won’t be able to make the kind of investments in universal basic services that we desperately need. A radical overhaul is required.

Sustainable and inclusive development will only happen if we make the right choices. Now is the time.