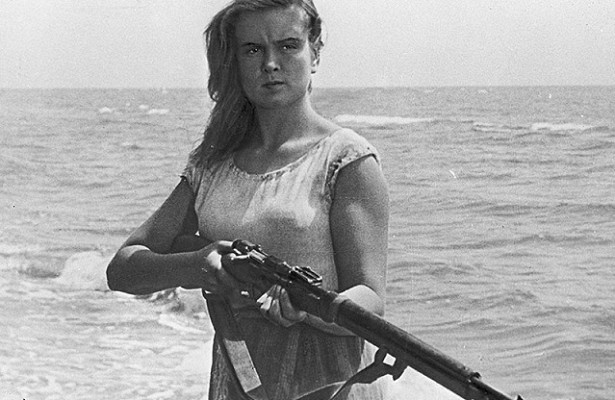 In this week’s edition of Cultural Marxism, Tara Brady writes about the Soviet civil war film “The Forty-First”. It was the first Soviet film to win the special jury prize at the Cannes Film Festival and is not about showing “good people on both sides”.

The debut feature from Grigory Chukhray – a decorated veteran of World War II who would go on to find global fame with the BAFTA-winning, Oscar-nominated Ballad of a Soldier (1959) – The Forty-First won the special jury prize at the Cannes Film Festival in 1957, becoming the first Soviet film to do so. Based on a popular 1924 short story by Boris Lavrenyov, a cross between Robinson Crusoe and Romeo and Juliet, it was previously adapted for the silent screen by Yakov Protazanov in 1927.

Set during the Soviet civil war (1917-1922), the film begins as it ends: with a crack shot. In a scuffle with the White Army, somewhere in the desert between the Aral and Caspian Seas, the Red Army heroine, a sharpshooter named Maria Filatovna (Izolda Izvitskaya), believes she has scored her 41st confirmed kill. Her intended victim, the aristocratic and sneering Lieutenant Vadim Nikolayevich Govorkha, Jr. (Oleg Strizhenov), survives and is taken prisoner by a small squadron of soldiers led by Commissar Ansenti Yevsyukov (Nikolay Kryuchkov). They search him and discover that he is carrying papers intended for a White Army general.  Taking him back to headquarters becomes a treacherous trek.

A sand storm ruins their water bottles. Marauders make away with camels in the night. When the caravan fails to round on the sleeping sentry, their prisoner is aghast: “Is this your discipline?” he asks.

The procession moves on until they come to an accommodating Kazakh village, a reminder of the scale of the Soviet project. By now, there is an obvious attraction between Maria and Vadim. She interests him as a romantic primitive oddity and yet he treats her with disdain. Her attempts to write revolutionary poems are scorned by the better-educated lieutenant. Even when the adventure continues into a stormy sea, leaving the unlikely lovers shipwrecked, she makes herself useful, finds a hut, nursing him through fever, and rolls his cigarettes, even when this last act requires her to tear up a poem that she has written. She dreamily calls him ‘blue eyes’ as she keeps their makeshift house.

He complains bitterly. “Shall I stop in this hole all my life?”

When a sail appears on the horizon, Vadim does not take long to, as Maria puts it, turn “white” again. She, as ever, stays true to her cause.

Most western readings of the film have emphasised its place within the “thaw”. A box office smash, The Forty-First arrived in Soviet cinemas three years after Stalin’s death in 1953, and alongside promises of greater creative freedom from Nikita Khrushchev (first secretary of the party from 1953 to 1964, and premier from 1958 to 1964).

Various US critics have framed the civil war backdrop in a way that, to borrow a Trumpian phrase, suggests “good people on both sides”.

This analysis simply doesn’t hold up.

It’s true that the film marks a move away from the classic early Soviet style, wherein filmmakers like Eisenstein privileged group action and the clash of images and ideas over conventional narrative structure and the individual protagonist.

And yet, as the title suggests, the coda is assured from the beginning. The romantic tragedy of The Forty-First is not Maria’s final, decisive action.

True, she is left brokenhearted, standing over a corpse, saying: “He was my 41st and I killed him because he was the only man I have ever loved”.

The tragedy here is that she has made every effort to appease her idle, arrogant, treacherous-to-the-last kulak paramour. He, in turn, has rejected her kindness and her revolution. She lives on, a peasant-soldier who has bettered herself through Marxist-Leninism, and who continues to better herself. Far from being a post-Stalin hero, she echoes how that Georgian peasant-soldier was underestimated during the early Bolshevik years.

For all Maria’s sorrow, as she bends over her only love’s dead body, there is no sense that she wouldn’t hesitate to shoot him again.