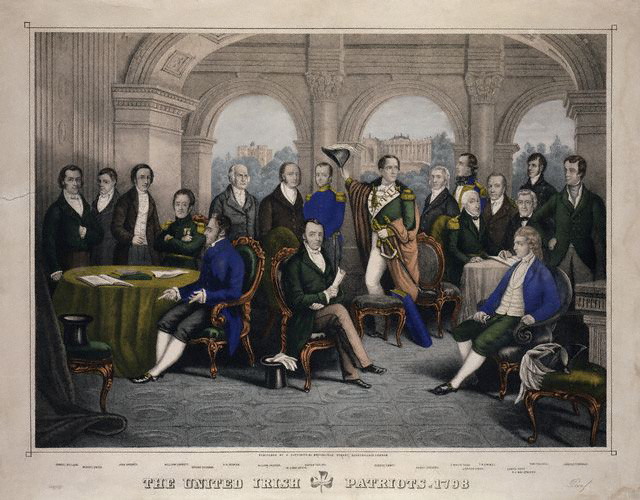 The Chancellor held a visitation to Trinity College from 19th to 21st of April 1798 on account of ‘rumours too well founded that principles of a treasonable nature have made their way within these walls’. Drennan informed Martha that nineteen students had been expelled. He felt that those who were suspected as United Irishmen chose not to appear ‘for fear of further prosecution. In fact, the first person called before the Chancellor was Robert Emmet. He was not present and was expelled. The Chancellor carried on his inquisition over three days and Drennan thought his lectures on morality and religion ironic, in the light of his conversation which is ‘a tissue of obscenity and blasphemy.’

John Browne (1779-1808), who was a native of Belfast and a firm friend of Robert Emmet, was also expelled. Brown carried messages for Drennan which he dared not trust to the postal system. When Drennan told his sister that she could get more details of the visitation from Brown he prudently omitted that Brown himself had been expelled. Drennan thought that Robert Emmet might accompany Browne to Belfast and told his sister that the young man was a wonderful orator, though modest and diffident in company. Within a week a warrant was out for Emmet. When Drennan heard the news, he called around to visit Emmet’s father but there was nobody home.

The Castle now regarded Dublin as the headquarters of treason and the military were patrolling the streets. Drennan joked that if he met one of these patrols at night:

I could safely say it was not Cinna the conspirator but the poet, though they might treat meet to the touch of the bayonet for my bad verses. I should not like to be put to death yet a little, and therefore will keep myself as I have done the most politically innocent man in my conscience I do believe in this city, as yet the one most generally suspected.

On 24th April Drennan arrived back at his Dame Street lodgings where he found a Mr. Wilkinson waiting  on him with a letter which read as follows:

You most probably have heard of my being in custody under a charge of high treason for which I am to be tried on 30th of this month, at Maidstone in the county of Kent. My life being at stake, I trust no other apology for me entreating you to accompany the bearer of this letter to England, for the purposes of giving your evidence which my counsel are of opinion will be very material on my behalf. Yours ever most sincerely A. O’Connor

It was most inconvenient for Drennan to go at that time and he knew that professionally the journey would be very considerably injurious to him. He also doubted his evidence would be of any use. Yet he immediately agreed to travel. He was compelled by a sense of duty to risk any injury to himself to do anything he could to help a man with whom he was very little acquainted. He was determined that the slightest omission on his part should be of any disservice to the life of a man.  He hoped his family in Belfast would agree with his decision. Martha assured him while they were surprised, the family were not at all dissatisfied that he should do his duty.

However, when he reached London he was advised by Thomas Erskine (1750-1823), the famous lawyer, that if he called Drennan to give evidence it could do more harm than good. In the event O’Connor was acquitted, but his co-accused, James Coigly (1761-1798), was hanged. Drennan’s journey into England was a waste of his time except that he got to see the English countryside and enjoy a very short time in London. When he reached Liverpool late on Sunday the smell of the docks reminded him of the slave-trade. But he enjoyed his coach journey across England.

His travelling companion was Henry Grattan who throughout the journey was civil, kind, courteous and accommodating. When they reached London they spent a lot of time together dining at the White Hart, Holborn and visiting the opera and Drury Lane. George Smith, one of O’Connor’s legal team, gave Drennan a seat in his carriage and they visited with the famous British radical, John Horne Tooke at Wimbledon. Drennan was impressed by Horn Tooke whom he felt ‘to be a person of superior mind’.

Drennan returned to Dublin on 7 May. A few days later he learnt that the authorities were offering a reward of £1,000 for the discovery of Lord Edward F[Fitzgerald]. Hearing that Lord Edward’s wife was anxious to know about his visit to England, he called on her and chatted for some time with her. Given the reward for her husband, Drennan must have known that Pamela Fitzgerald (1776-1831) was being closely watched by spies and informers. He believed that the administration was using talk of informers of high degree and low ‘to infuse distrust and complete division’. He told Martha:

Domiciliary visits are to be paid here every night as well as day, in search of strangers from the country who have taken refuge in town or for concealed arms. I suppose three or four people will be set as spies of each division or sub-division of the city. The County of Dublin including part of the city will be proclaimed during the next week, … I marvel much, standing untouched as I do that they have not raised the cry against me of an informer …

Just as Drennan had predicted, martial law was formally declared in Dublin city and county on 18th May.   Edward Fitzgerald was wounded during his capture on the 19th and died in great agony a few days later. Ruán O’Donnell describes the measures taken by the authorities when Dublin was proclaimed:

From that day the constant patrolling of the yeomanry and the posting of sentries on the Liffey and canal bridges brought an air of menace to daily life in the capital. Preparations were made to fit iron gates, in storage for over a month, to all the main bridges. This was intended to increase the efficiency of the curfew and impede illegal traffic.

After the city was proclaimed Drennan wrote just one short note to his sister dated 2nd June merely assuring her he was well and had nothing to fear. That was his only communication with her for nearly two months until the end of August, by which time the rebellion had been mercilessly crushed. We have no details of how Drennan behaved in late May and June as the rebellion raged in Wicklow, Wexford, Kildare, Antrim and Down and as a reign of absolute terror was unleashed in Dublin city. He presumably obeyed the 9 p.m. to 5 a.m. curfew. We may never know whether he saw the body of his old friend Francis Bacon along with dozens of others hanging from Carlyle bridge or the hundreds of rebel corpses thrown into the rubbish pit outside the Royal Barracks. Many of the homes of suspected rebels were torched in the city and the home of Drennan’s friend James Dixon at Kilmainham was occupied by the military. Drennan was fortunate that he was not among those caught up in the ‘vicious circle’ in Dublin who, ‘fearing courts martial and flogging, were driven from their homes with little option other than joining the rebels gathering in the woods, bogs and mountains of south Leinster.’

Martha wrote three letters to her brother between late May and the end of June. She admonished him severely for not keeping in touch at such a time. She knew little of what was happening in the northern countryside except what she read in the papers. She did get a first hand account of the battle of Antrim from a woman who had taken the wounded Lord O’Neill from a street in the town. He died from his wounds on 18th June. She took some comfort from the fact that Belfast was being guarded by a yeomanry corps which included old friends of the Drennan family such as Dr. Bruce, Rev Vance and James Kennedy Trail. This should not be taken to mean that she was supporting the yeomanry and opposing the rebels. She had long feared that the Armagh Orangemen who were welcomed into the yeomanry by General Lake might burn the town of Belfast if they got the opportunity. Better to be guarded by New light Presbyterian ministers of her own congregation and a prosperous citizen with loyalty to the town than by its sworn bitter enemies.