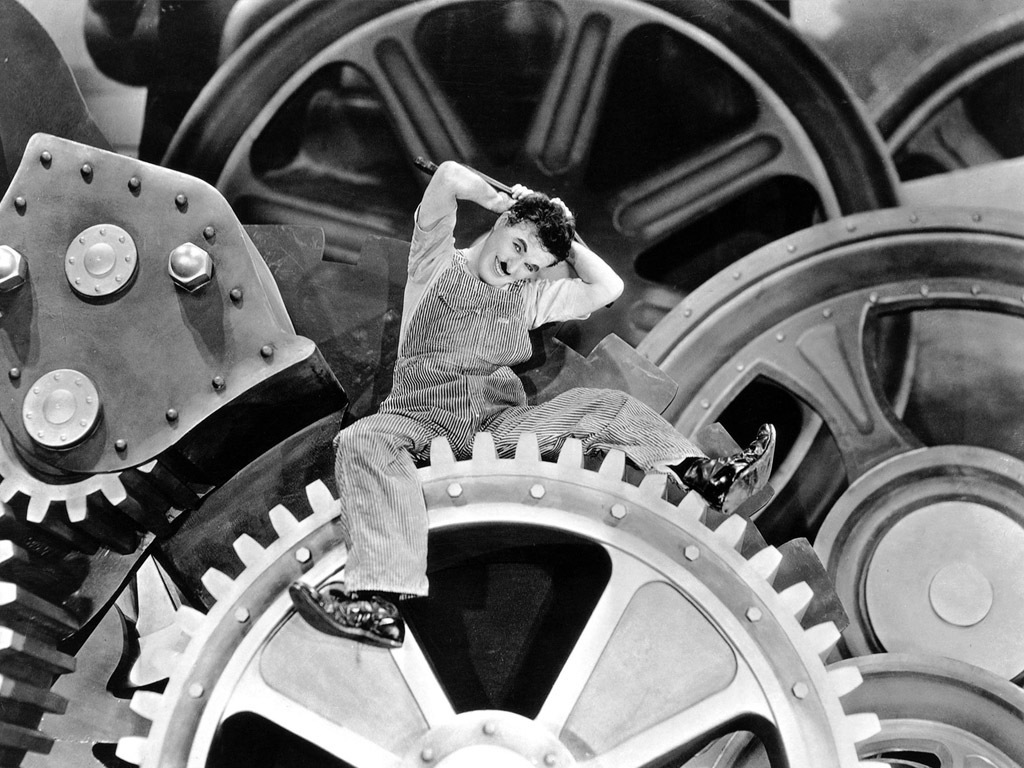 Tara Brady looks at the politics and the personal in Charlie Chaplin’s Modern Times.

There was a renewed interest in Hollywood’s last silent production last year when Todd Phillips’ Joker curtseyed before the Chaplin film by programming Modern Times as the opening film at Wayne Hall. Presumably Batman’s billionaire family rather enjoyed revelling in the economic miseries of the Depression-era labourer.

The final screen bow for Chaplin’s iconic Tramp character is an anxious, giddy satire of industrialisation that works its way through the four aspects of the alienation of labour in a capitalist society, as outlined by Marx in Economic and Philosophic Manuscripts.

As Modern Times opens, Chaplin is a bolt-tightener working at improbable speed on a conveyor belt at “Electro Steel Corp”. He is alienated from the product of his labour which disappears before we might gather what it is. He is alienated from the monotonous production work, so much so that his hands continue to twitch in bolt-tightening motions even when he is on break. He has no creative or human input into his work.

His conversion into an object by the capitalist mode of production is visually rendered when he, and later a fellow labourer, gets caught up in the vast machinery of the factory. He is literally a cog.

He also becomes the test subject for a “feeding machine” designed to feed labourers while they work, thereby eliminating the lunch hour. A lonely cigarette break in the lavatory, a sorry depiction of The Tramp’s alienation from other workers, is interrupted by the boss’s appearance on a giant video screen: “Quit stalling and get back to work.” he snaps.

Finally, The Tramp breaks down,seeing bolts to be tightened everywhere. He is taken to hospital and discharged into a scene of civil unrest. Arrested as a Communist leader, he accidentally foils a prison escape plan and is, to his great disappointment, pardoned. Fired from a shipyard job, he meets Paulette Godard’s gamine, a motherless hustler who steals food from the docks for her siblings. Together, they dream of living in a house. The Tramp gets a job as a department store nightwatchman but is fired. She gets a job as a cabaret singer but – back to the fourth aspect of alienation – is recognised as a vagrant and is chased away by her colleagues.

Chaplin’s clowning around automation dovetails with the writer-director’s own sense of obsolescence, an aspect he amplifies with a playful use of sound, including a memorably nonsensical song. (Modern Times was completed almost a decade after The Jazz Singer ushered in the era of the “talkies”.)

Made four years ahead of his stinging anti-fascist satire, The Great Dictator, and his contemporaneous plea to a San Francisco war rally stressing the urgency of Russian war relief – during which he referred to the crowd as “comrades” – Modern Times appears at a crucial moment.

Chaplin, who was born into grinding poverty in London, and was sent to the workhouse, aged seven, in 1896. He lost his father to alcoholism and his mother to psychosis, brought on by malnutrition and syphilis. His alter-ego, The Tramp, was simultaneously a Pierrot, an everyman, and an economic outsider.

Aged 26, his $670,000 a year ($15.7 million, adjusted for inflation) with Mutual Film Corporation made Chaplin one of the highest-paid people in the world. And yet, even after he hung up The Tramp’s battered hat, he continued to portray the down-at-heel (Limelight) and the destitute (A King in New York). That was, in part, at least, rooted in his increasingly apparent politicisation.

The Federal Bureau of Investigations (FBI) investigated Chaplin from 1922 onwards for his ties to the Communist Party of the United States. Sure enough, Buster Keaton recalls a 1921 Hollywood gathering during which Chaplin talked “about something called communism” that “was going to change everything, abolish poverty.”

“They say communism may spread out all over the world,” Chaplin told a New York City gathering in 1942. “And I say: so what?”

The Tramp’s final scene in Modern Times is not a fairytale ending, but the promise of struggles to come for the would-be workers. “What’s the use in trying?” asks his once-again jobless love interest. “Buck up,” replies The Tramp with a fist in the air. “Never say die! We’ll get along!”