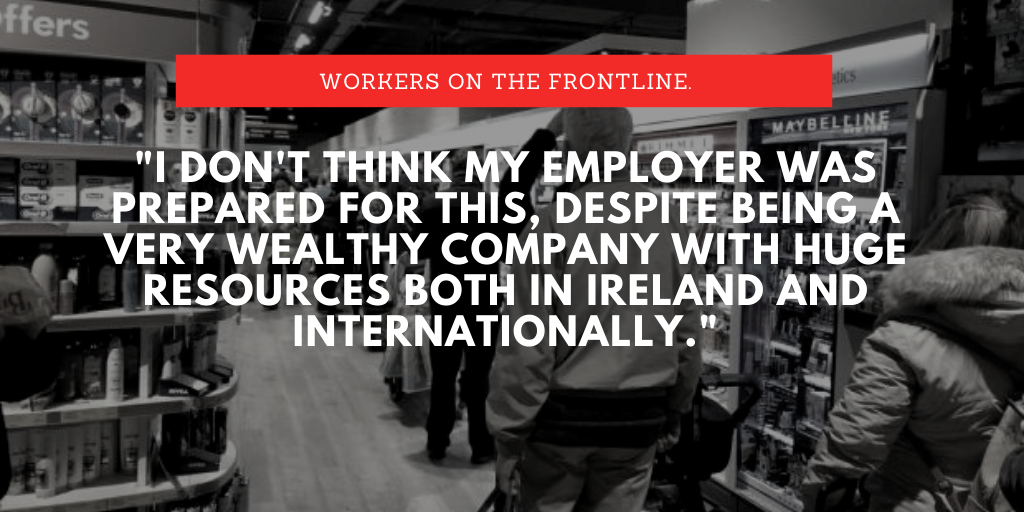 The COVID-19 pandemic has made it clear who our society’s real essential workers are. In the first of a series of interviews with frontline workers, LookLeft speaks to a young worker in a major grocery retailer.

I’m a general assistant for a major grocery retailer in North Dublin. The workload has increased dramatically since the outbreak began and with panic buying it has been a real struggle to keep shelves stocked.

I don’t think my employer was prepared for this, despite being a very wealthy company with huge resources both in Ireland and internationally. My employer was slow to act but has now introduced more measures to support and protect staff. A lot more could be done, especially when it comes to limiting the number of people in the store at any given time. We received a 10% bonus, but I believe this should be a permanent pay increase.

I’m one of the shop stewards in my store. Mandate Trade Union has sought feedback from members through surveys, which has helped to highlight the lack of a response from some retailers. Activists in my store have tried to make management aware of workers’ concerns on a daily basis. The number of people in store is a constant one, protective equipment (like gloves and screens) being available is another, and then social distancing being adhered to.

I have been forced to stay from older family members and those with underlying health conditions, so that’s been tough.

Unfortunately, I would say that in general the public haven’t responded well in terms of their shopping habits. Retail can be a hostile work environment at the best of time, but the level of rudeness and aggression has greatly increased. You do get the odd person who says thanks though.

One thing I’d say to the public? Where possible, one person per household should do the shopping, don’t bulk buy essential items, and treat retail workers with the respect they deserve!