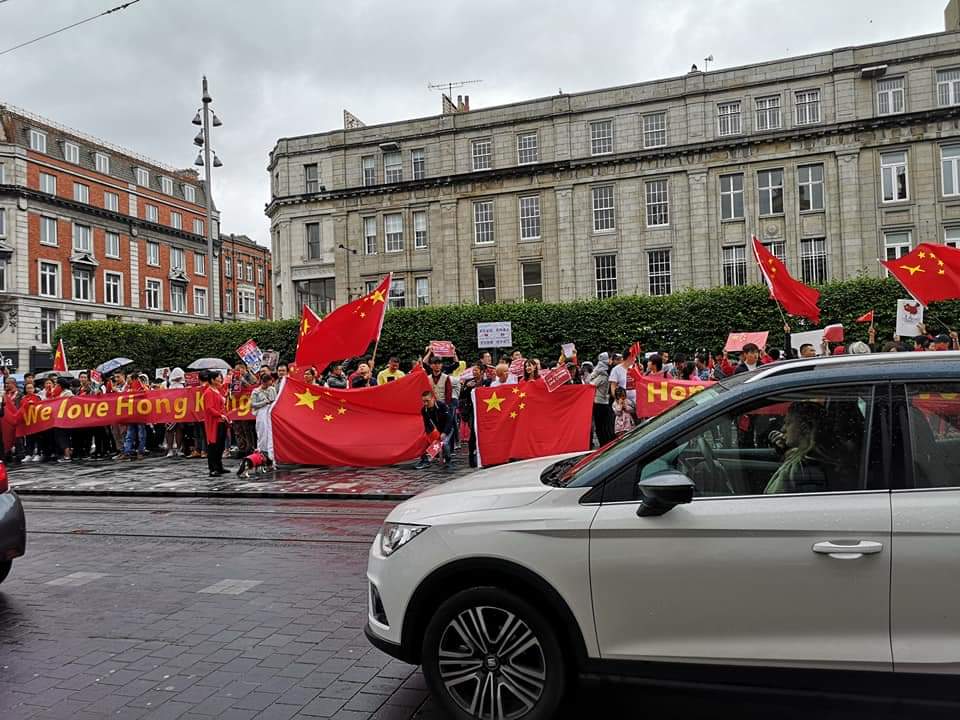 Hong Kong is making headlines worldwide as an extradition bill, designed in reaction to a high-profile case in which a man allegedly murdered his pregnant girlfriend, was met with protests. Key leaders of the demonstrations were caught meeting with U.S. diplomats, raising questions as to whether the protests are being orchestrated and funded by the U.S. to further their own geopolitical interests against China. Meanwhile, some have accused Western media of giving favourable coverage to the protesters, neglecting to highlight their violence or the counter-demonstrations that have taken place in Hong Kong, in a bid to paint China and Hong Kong in a bad light.

This prompted the Chinese community in Dublin to organise a rally on O’Connell Street on Tuesday (August 20th) to show the side of the story that we do not see in the mainstream media. LookLeft Magazine spoke to one of the attendees, Tian Yu, to get her perspective on what’s happening in Hong Kong.

Could you describe the current situation in Hong Kong?

“Hong Kong society is now extremely divided. The protesters and anti-protesters seem to consume extremely divided information. Most people on both sides want to have peace back. Neither side think they are wrong. Both sides have people who are willing to be more violent. As far as I could see, at the start it was very few among the protesters who started attacking the Legislative Council (June 12th), which began the violence.

Understandably, tension had been building in Hong Kong for many years. Between the highest property price in the world and the rather modest ordinary income in Hong Kong, and the millions of visitors from all over the world including mainland China, I have long wondered how Hong Kong managed to cope. Indeed often mainlanders were blamed for all sort of things (some bad incidents to add oil to fire), much like how immigrants could be scapegoated elsewhere in the world.”

How do Chinese people, and Hong Kong Chinese in particular, view the actions taken by protesters and the police?

“As mentioned earlier, mainland Chinese have for quite sometime felt themselves unwelcomed, and there had been many incidents to reinforce such feeling. So the general interpretation of the protest among most mainland Chinese people, at home or overseas, is that many in Hong Kong do not want to be Chinese, and rather want to be Americans or British.

Hong Kong itself is very divided. There is a clear divide among young people and older generations. Mainlanders blame this as a result of the history education in Hong Kong. Education textbooks are published by private publishers, and the HK government failed to pass a resolution to change the books to be more China friendly. To this day, Hong Kong children learn little about the opium war and the Nanjing Massacre, but a lot about Culture revolution, Tiananmen and the glorious days under British control. No wonder British flags are still waved in Hong Kong.

The protestors believe they are trying to push back Chinese influence in Hong Kong, because China is not a democracy and China is there to take over their resources. Since the June 12th incident, they also feel like the world is on their side against China, so violence became persistent. The pro police side want normality back, and want the police to do their job to protect them from violent rioters (very few but very impactful). Many commentators have warned that Hong Kong will no longer be Hong Kong, as it can no longer pride itself for order and stability, as a result of the prolonged protest.”

What was the aim of the demonstration held today by the Chinese community in Dublin?

“Like many Chinese all over the world, the Chinese community has been extremely upset about the rather one-sided report on the protest in Hong Kong. As Hong Kong is a part of China, a vibrant Hong Kong is good for China, and is therefore good for every oversea Chinese. The Hong Kong police has been one of the most transparent police forces in the world, they report their business to the world everyday, including why they took certain actions and what results there are, but the world media is not interested in their side of the story. Police force are human beings too. The Chinese people feel they need to let the HK police know their efforts are appreciated, and let people in Ireland know they are not given the full truth.”

What do you make of key leaders of the protests in Hong Kong meeting with U.S. diplomats, while other demonstrators call openly on Donald Trump to “liberate” Hong Kong? In addition, have you any thoughts on the flying of colonial era flags featuring a British ensign?

“Very saddened. Some leaders have personal grudges with mainland, others feel more British than Chinese, and others might just be believers of American value. They either don’t have Hong Kong’s real interests at heart, or don’t understand what would be in Hong Kong’s best interests.”

What do you see as the best outcome of the situation for Hong Kong?

“Hard to tell. I think the violence is probably coming to an end, as the protest leaders finally start to emphasize “Peaceful, rational and non-violent” in their protests, so perhaps the very few aggressive protestors will try to restrain themselves. However, Hong Kong’s reputation is damaged, and will be hard to recover.”