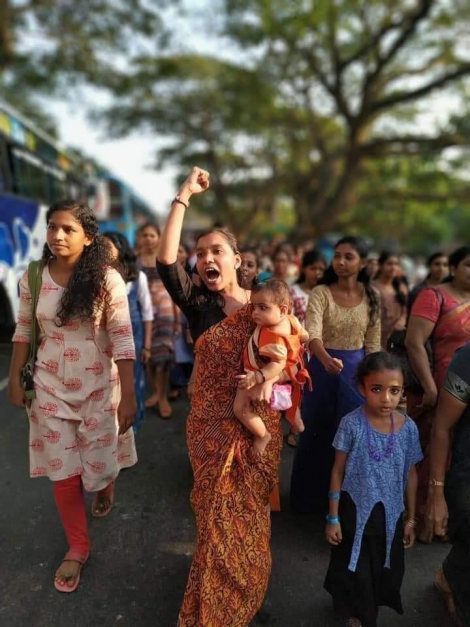 On New Year’s day, five million women in Kerala marked an epoch in the history of their endless struggles against the patriarchal, feudal society in which the caste system is deeply ingrained. Women from all walks of life and religions took part in the Women’s Wall, including massive numbers of women from minority communities, especially Muslims despite the “fatwa” (ultimatum) produced by “Samastha”, an extremely orthodox Muslim organisation. A number of Christian bishops and a large number of nuns also joined the wall in solidarity.

Yesterday’s monumental wall adds to the historical renaissance movements in Kerala state which differs from other states in the country by the prominent stream of women and lower caste struggles amongst them. “The Channar Revolt” in the early nineteenth century was a women’s struggle for their right to cover their breasts, which was taboo for lower caste women at the time, and was one of the earliest landmarks in Kerala’s renaissance movements. Another woman hero named Nangeli cut her breasts as a revolt against the infamous ‘breast tax’ imposed by the Travancore Dynasty – regardless of whether she was real or a myth, Nangeli served as a powerful icon of women’s struggle in India. The Women’s Wall, a 620km human chain through the state of Kerala, was organised by the Left Front Government, of which the Communist Party of India Marxist (CPIM) are the leading partner, as a protest against recent events in the state which have threatened the equality and rights of women. Last September, the constitutional bench of the Supreme Court in the country made a ruling allowing women of menstruating age, between 10 and 50 (stipulated by religious devotees) to enter one of the most celebrated Hindu temples in South India called Shabarimala. This verdict came after a detailed twelve year long case where the court had heard from all stakeholders involved. The court observed that it is a breach of fundamental constitutional values to discriminate against women. It was also made very evident that the current ban on women of a certain age had only been in place for the last few decades.

In the immediate aftermath of the verdict, almost all political parties, including the extreme right-wing, Hindutwa themed ruling party Bharathiya Janatha Party (BJP), supported the verdict. The Left Front Government took a clear stand right from the beginning that women must be allowed to enter the temple regardless of their age. However, within a few days of the verdict, a number of religious devotees started to organise protests named “Nama Japa” (chanting mantras).  Seeing this as an opportunity to develop these protests as a public furore against the Left Front Government, the two major right-wing parties in the state, Congress and BJP, made a u-turn on their stance and joined the protests of the gullible devotees demanding the Supreme Court verdict not be enforced. It’s interesting to note that this issue emerged after a month when Kerala was ravaged by floods where millions of people lost their homes. People in the state had a shown remarkable resilience and unity which was upsetting to the opposition political parties who took this as a golden opportunity to try to shake the Left Front Government.

The government, on the other hand, remained steadfast in its commitment to allow gender justice for women of all ages and to fight discrimination, of any kind, against women. The Chief Minister of Kerala, Pinarayi Vijayan of the Communist Party of India Marxist, resolutely stuck to his commitment to implement the Supreme Court ruling amid the multifaceted protests lead by various political parties and devotees. However, whenever there was an attempt by few women to enter the temple, Hindutwa activists disguised as devotees unleashed unbridled violence against those women with the result that no women have gained entry to the temple to date.

Hence, it was imperative for the state government to build a social platform of consensus and awareness among the people about the historical significance of the Supreme Court verdict.  The Left Front parties organised hundreds of public meetings, most of which were attended by the Chief Minister, to explain the need to uphold the Supreme Court verdict and to make the public aware about how this verdict is linked to the progressive, renaissance values of society.

Yesterday’s Women’s wall was a continuation of such efforts to make the public, and especially women, aware of their rights to equality and gender justice, rights which are not confined to entering a temple but in all aspects of their social life.