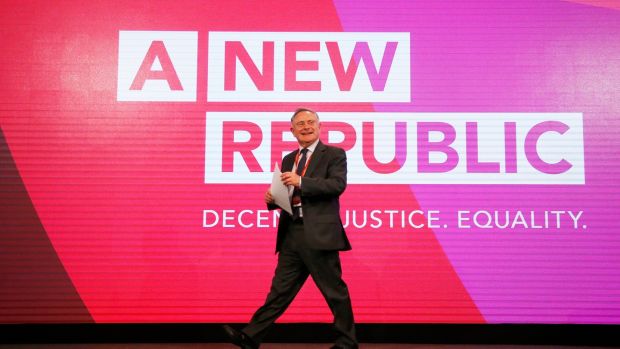 This weekend at the Labour Party conference, party leader Brendan Howlin spoke of socialism, the recent re-election of Uachtarán Michael D. Higgins and called on Labour voters to give preferences to “other progressives”, as he put it, meaning the Green Party, Social Democrats and progressive independents.

Despite his best efforts to make out that all of this is indicative of the future of the party, this is all a far cry from what the party was saying and doing before they lost 30 of their 37 seats back in the 2016 general election. Following a coalition that proved disastrous for the party, there was an almost total wipeout of Labour TDs. It was high time for the party to receive its comeuppance, having made little effort to resist the agenda of austerity ushered in by Fine Gael and themselves. Cuts in public services like education, healthcare and welfare, as well as the potential privatisation and implementation of water charges proved to be a thorn in the side of the Irish people. It is absolutely no secret that Labour are in part responsible for this. It is worth nothing that at their conference this weekend, Howlin stated;

“In a constituency where we can’t have Labour, let’s not have conservatives, nationalists or populists.”

The latter, clearly a dig at those who opposed the water charges, shows that Howlin is still bitter over the fact that his party were defeated in their complicity with Fine Gael to try and privatise and implement the charges.

Knowing fully well the level of discontent that that they are held in by working class people, Labour is now attempting to paint itself as the alternative to the crises that Ireland faces, neglecting the fact that they helped create many of them. Spouting socialist rhetoric at their annual conference while in opposition means nothing when the party consistently sold out communities when they could have said no. To judge any party on what they say and not what they do would be ludicrous, and this is something the electorate are well aware of.

On the electorate, Howlin claimed that “Irish voters are not allergic to socialism.”

Indeed, they are not, but the Labour Party is no representation of socialism. There are, of course, some in the party who would be opposed to what their party has done in government and, more importantly, would oppose it should they attempt to do so again. Amongst their grassroots and younger members, there are some genuine socialists interested in and dedicated to building up a movement that works for working class people and communities. Unfortunately, the Labour Party as a whole has proven that it is not a party capable of building such a movement.