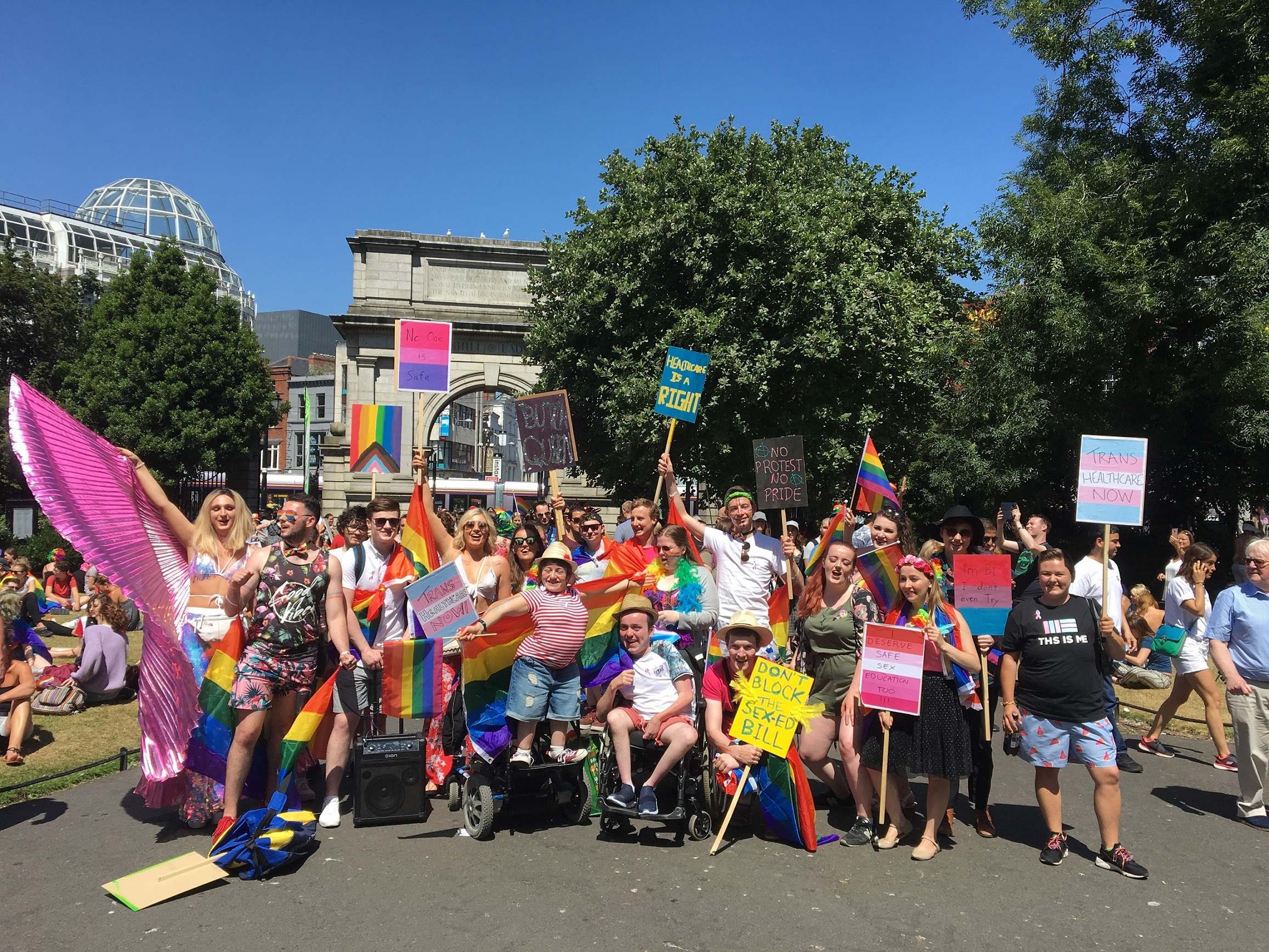 60,000 people joined in a sunny Dublin Pride 2018 yesterday. LookLeft stopped by and asked a few why they were marching. Here’s what they said.

“Today we’re here for protest. We are demanding that we have access to PrEP, which is pre-exposure prophylaxis. It’s a drug that is given to high-risk populations of contracting HIV. What the pill does, if you take it every day and you’re exposed to HIV, you will not get HIV. It’s an absolute game changer. And the reason why it’s so important is that HIV rates have never been higher in Ireland. The HIV rates are soaring and it’s particularly affecting men who have sex with men. So the last two and a half years we’ve seen 600 men be infected with HIV when it can be completely avoidable. PrEP works. It’s happened all over the world. We know it’s effective. We know it’s cost effective. And we know it’s safe. Yet it’s not subsidised by the HSE. And it’s a complete health inequity within our community.”

“I’m here with my signs because I want people to remember that the reason that we have Pride is because of trans women of colour. And also last week there was a little boy in the US who was killed because he came out that he was gay. He was 10 years old. And just two days ago there was a gay couple who were bashed in county Laois. So my sign says “‘The fight for LGBTQ+ rights isn’t over yet’.”

Amy: “I’m here to celebrate being LGBTQ! UCD SU are here to promote the importance of trans healthcare and the fact that we don’t have adequate healthcare for people who are trans at the moment. In Ireland trans healthcare is not sufficient. The Government does not provide adequate funds in order for people to have reassignment surgery and hormone therapy. The waiting list is currently 18 months. That’s not acceptable. People who are trans should have the opportunity to be who they are, very simply.”

Eoin: “I’m here on behalf of the UCD students. UCD students and students all around the country give a damn about LGBTQ rights, as well as trans healthcare, which is why we’re primarily here. We’ve come such a long way in this country but trans healthcare is something that we’re still lagging behind about. I was the Welfare Officer and I saw students who really needed this, it was their identity, it was who they are, but they were being made wait 18 months for their healthcare. Anywhere else in the world this wouldn’t be adequate.”

“INTO have a very strong LGBT section within the union. We’ve always supported diversity and campaigned for acceptance of diversity. We try to teach diversity within our schools and are great advocates for diversity.” “We’re here protesting the corporate sponsors who have taken over Pride when in essence it’s a protest, to protest the hypocrisy of those corporations. There’s a severe homeless crisis here and loads of properties are being put up on AirBnB for outrageous prices to accommodate tourists and then at the same time we’re not building social housing, we’re just building more hotels.”

“The political point we’re trying to make here is to challenge Israel’s policy of pinkwashing in the media, where they present Israel as a haven for gay people or talk about the Tel Aviv nightclub scene as a conscious means of promoting positive images of Israel like their supposed rights afforded to queer people, although it is a country that has not legalised gay marriage.” “We’re here today as part of Queer Action Ireland. We’re a group committed to pointing out the hypocrisies of companies that are marching in the Pride parade in terms of using LGBT rights as a sort of tokenism to gain points and as a marketing ploy to attract consumers. We don’t think it’s right that companies should just see us as a marketing demographic and we believe that if they wish to march in the Pride parade that they should step up and actually work consciously towards improving the lives and wellbeing of LGBTQ people in Ireland.”

“We’re here to support LGBT people and LGBT travellers specifically. Today is really a fantastic day, a celebration, solidarity, unity. It’s also a great atmosphere. And in terms of where we are as a society – we’re in a far better place and just in terms of the Traveller community we’re delighted to be here participating and taking back ownership.”

“We are family and we believe in better. Just like the people who came before us we think this can be better. In 1974 there was the original protest outside the Department of Justice and there was a group of queer people who thought ‘you know – enough is enough, we deserve to be recognised’. In 1983 after the death of Declan Flynn, when the people who murdered him got off on suspended sentences because they were ‘cleaning up the streets’, the queer community said ‘you know what – enough is enough’ and they gathered together and they made things better. In 1993 David Norris brought his case and he said ‘enough is enough’ and people gathered behind him and they made safer streets for all of us. In 2015 we had our gender recognition when the trans community decided that was enough for them and they came out and they were given support by our community. And the same year we got marriage equality because enough people stood up and said this is not good enough