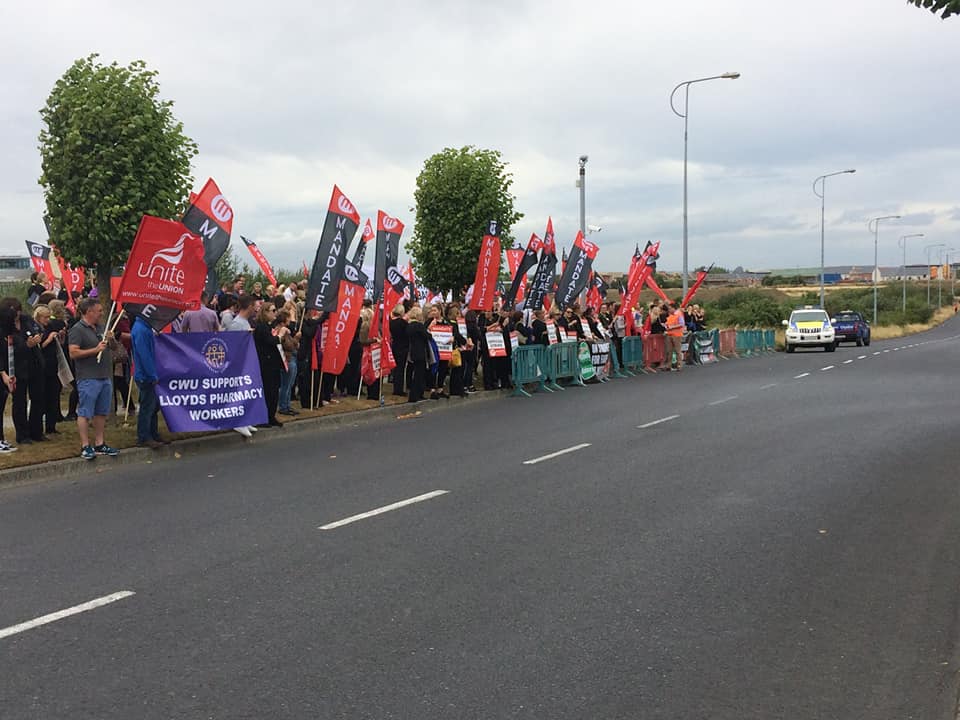 Today, a couple of hundred workers from LloydsPharmacy outlets, who are represented by Mandate Trade Union as they engage in a dispute with their employer over union recognition, held a demonstration outside the headquarters of United Drug, the parent company of the pharmaceutical chain, in Citywest. Members from a number of other trade unions, political parties and the general public also came out to show their support to the striking workers.

This followed a general meeting of LloydsPharmacy workers in Citywest Hotel, where they discussed their next move as their dispute with management continues. They stressed the fact that they do not want to be on strike, but have been left with no other choice by their employer. The workers would like to see a pay increase and incremental pay scales, the introduction of a sick pay scheme, security of hours, the elimination of zero hour contracts, and improvements in annual leave entitlements and public holiday premiums. LloydsPharmacy is owned by the McKesson Corporation, the largest pharmaceutical company in the world, which in 2017/18 had revenues greater than double that of the Irish state at €177 billion.

Initially assembling just outside the premises, the workers and their supporters marched (after negotiation with security) to the building owned by their employer, then calling on representatives of their management to come out and speak to them.

A statement released on the campaign’s Facebook page prior to the demonstration said that it is “extremely encouraging to see such a huge turnout of workers prepared to stand up as a collective and fight to win better terms and conditions”, highlighting the fact that 270 of the workers represented by Mandate showed up to their general meeting, before joining up with their supporters for their demonstration.

As it stands, LloydsPharmacy refuses to afford their staff the right to trade union representation by refusing to negotiate. Workers and customers alike are hoping to see an end to the dispute soon.