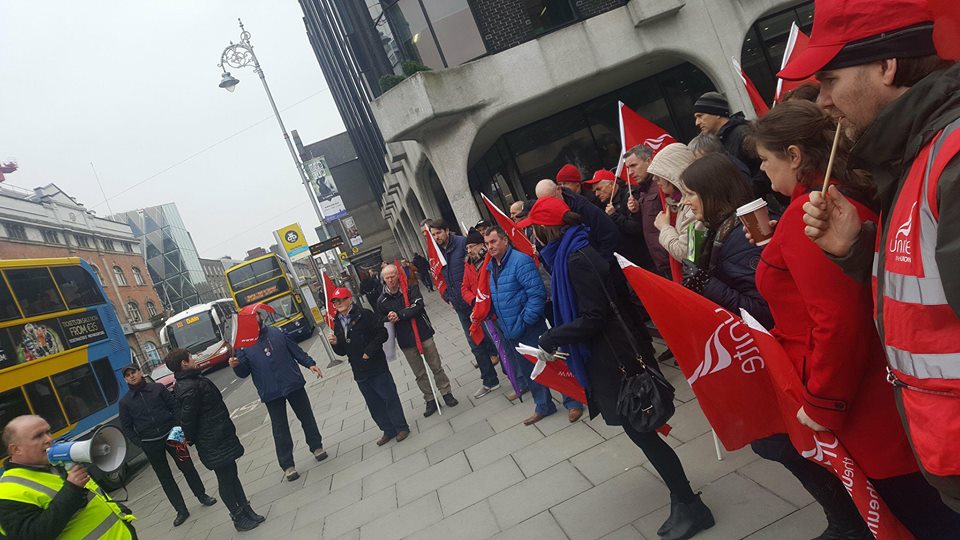 Close to 800 Unite members in Ireland’s largest pension provider took strike action in a dispute centred on Irish Life’s unilateral decision to close the workers’ Defined Benefit pension scheme as of June 30th without the union’s agreement.The stoppage lasted from 0.01 hours to 23.59 hours, with pickets placed in Dublin (Lr Abbey Street) and Dundalk (Finnabair Industrial Estate) from 6 am to 6 pm.

Commenting, Joe Conroy, who chairs Unite’s Irish Life Committee, pointed out that Irish Life is highly profitable, returning over €200 million each year to its Canadian parent company, Great West Lifeco, and he said: “As the country’s largest pension provider, people up and down the country trust Irish Life to ensure their pension security in retirement – yet the company is threatening the pensions security of its own workers”.

Unite Regional Coordinating Officer Richie Browne noted that the company has so far refused to engage with Unite regarding alternatives to their unilateral decision to close the scheme as of June 30th, leaving members with no option but to take industrial action in the absence of meaningful talks.